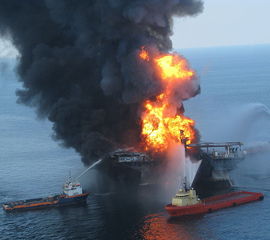 Despite an army of reporters and officials investigating the Deepwater Horizon oil rig disaster, one item has curiously escaped much attention: Shell Oil is running a nearly identical "sister rig" in the U.S. Gulf of Mexico, which may have the same design flaws that led to the current unfolding disaster.

The Deepwater Nautilus rig was built just a year after Deepwater Horizon, in the same shipyard for the same company implicated in the April 20th disaster. It’s also drilling in the same Mississippi Canyon prospecting area of the Gulf where Horizon, the rig being used by British Petroleum, met its demise.

Horizon and Nautilus were both built in South Korea by Hyandai Heavy Industries for Transocean Ltd., the largest offshore oil drilling contractor in the world. Transocean has its roots in Birmingham, Ala., where it spun off from Sonat, Inc. in 1993. Today — after a dizzying series of mergers and acquisitions— Transocean is incorporated in Switzerland, has locations in 20 countries, and boasts an unparalleled fleet of 136 offshore rigs.

With the state-of-the-art Deepwater rigs, Transocean sought to revolutionize the offshore drilling industry. With shallow water oil exploration seeing diminishing returns — and oil prices still climbing earlier in the decade — Transocean gave oil companies the rigs they needed to drill deeper and further in the ocean to realize energy profits. By 2007, Transocean had a world-leading 48 deep water rigs that it leased to oil companies like British Petroleum and Shell Oil.

Up until two weeks ago, Transocean’s deep-water operations in the Gulf of Mexico seemed full of promise. Last September, Offshore magazine reported that Deepwater Horizon, leased by BP, had set a record by striking oil at the Keathley Canyon block in the Gulf of Mexico at 35,055 feet — making it the "deepest well ever drilled by the oil and gas industry." BP lauded the feet as a sign of good things to come: "These material discoveries together with our industry leading acreage position support the continuing growth of our deepwater Gulf of Mexico business ..." That optimism went up in smoke with Deepwater Horizon’s explosion, calling into question the rest of Transocean’s offshore projects — especially Horizon’s sister rig, Deepwater Nautilus.

Nautilus is virtually identical to the ill-fated Horizon. Nautilus came first, launched in 2000 and touted to be first in a series of "Fifth Generation Deepwater" rigs that were to lead Transocean’s "deeper and further" drilling strategy. Both were made by Hyundai Heavy Industries in Ulsan, South Korea, and their technical specifications read almost like carbon copies.

Nautilus is leased by Shell Oil, which — like BP with Horizon — aimed its drills in the Mississippi Canyon prospecting area, located in the central region of the Gulf of Mexico. This past March, Shell announced it had "struck black gold" in Mississippi Canyon blocks 391 and 392 — just miles to the west of block 252, where Horizon blew and unleashed its spill.

Nautilus’ discovery led David Lawrence, Shell’s executive vice president of exploration, to enthuse: This discovery builds on a successful 2009 exploration program in the Gulf of Mexico, where Shell had discoveries at West Boreas, Vito and Cardamom Deep ... Shell has the technology, the expertise and a skilled, motivated workforce to expand oil and natural gas production in the US and worldwide.

But in the wake of the Deepwater Horizon disaster, the future may not be so rosy for Shell and Deepwater Nautilus.

Given their nearly identical designs, Nautilus may suffer from the same design flaws that destroyed Horizon. For example, one possible explanation for the April 20 blowout is a failure in the "cementing" process that creates a seal between the pipe and the hole drilled into the ocean floor. Halliburton/KBR has been fingered as the company in charge of cementing for Deepwater Horizon; right now, Transocean’s website merely lists "third party" as being responsible for Deepwater Nautilus’ cementing.

It’s also not clear whether Deepwater Nautilus, like its companion rig Horizon, lacks an automatic "acoustic trigger," a remote shut-off devise required on rigs in Brazil and Norway that some experts believe could have helped stave the release of gushing oil. The Department of Interior doesn’t require acoustic triggers; Sen. Ben Nelson (D-FL) of Florida has asked for a review of the agency’s policies for requiring additional back-up measures to cap spills.

Facing South’s calls to Transocean and Shell Oil were not returned by the time this story went to press.

Concerns about Nautilus are compounded by recent reports of Transocean’s checkered safety and reliability record. As the Wall Street Journal reported this week, Transocean’s directors decided to forego executive bonuses in the wake of the deaths of four Transocean rig operators in 2009.

Even absent a Horizon-scale catastrophe, Nautilus has already had its share of dangerous incidents in the perilous world of deep-water drilling. In September 2005, Hurricane Rita pummeled Nautilus, sending the rig and its 45-member crew adrift at sea. Harrowing as that was, it wasn’t Nautilus’ worst scrape with disaster during hurricane season, as the industry website Rigzone reported at the time: [Hurricane Rita] is not the first time the Deepwater Nautilus has been on the losing end of encounters with powerful Gulf of Mexico hurricanes. In September of last year Hurricane Ivan tore the rig from its Shell offshore location, one hundred sixty miles south of Mobile, Alabama. The rig was later found slightly damaged some seventy miles from its original drilling location. Three weeks ago Katrina sent the rig on another unplanned and unmanned eighty mile voyage leaving rig mooring lines, anchors and 3,200 feet of marine riser pipe on the ocean floor.

The 2010 Atlantic hurricane season starts June and is expected to have a higher-than-average number of storms.

Chris Kromm is director of the Institute for Southern Studies and publisher of its online magazine, Facing South, where this story originally appeared. www.southernstudies.org