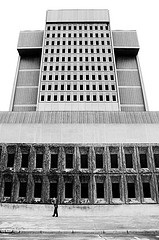 Bad Times for the Good Doctor

Dr Hassan Diab and the symptoms of a sick system.

Dr. Hassan Diab is a sociology professor and a law-abiding Canadian citizen of Lebanese descent who lives in Ottawa. Until shortly before October, 2007, Hassan enjoyed an engaged and productive public life.

Hassan is wrongly accused by the French authorities of being responsible for a 1980 bombing near a synagogue on Rue Copernic in Paris. In October 2007, a reporter from the French daily newspaper Le Figaro approached Hassan after his class at the University of Ottawa. The reporter asked Hassan if he was aware that the French authorities believed he was responsible for the 1980 Paris attack. Hassan was astonished by the reporter’s question and denied any responsibility, stating that any connection to the attack must be purely coincidental since “Hassan Diab” is a common name.

Thereafter, Hassan noticed that unidentified agents were following him, and someone attempted to break into his residence. He reported these incidents to the Ottawa police, but the intimidating and intrusive surveillance persisted. In spite of this, Hassan remained in Canada and continued his normal activities, including teaching at the University of Ottawa and Carleton University. Later, Hassan learned that the agents who were following him were from the Royal Canadian Mounted Police (RCMP).

On November 13, 2008, the RCMP arrested Hassan in response to a request by France. He was initially denied bail and placed in detention.

Family members, friends, colleagues, and mentors who have known Hassan for many years are completely shocked by the French allegations. They affirm that Dr. Hassan Diab is a peaceful, hardworking, and dedicated academic who has never expressed radical or anti-Semitic views, and who has never been affiliated with a political organization. They fear that Hassan will become another victim of the “War on Terror”.

Hassan’s new lawyer successfully appealed the original bail decision, which was quashed on Constitutional grounds. On April 1, 2009, after spending over four and a half months in detention, Hassan was freed on bail under very strict conditions. He lives under virtual house arrest, wears a GPS electronic ankle bracelet, and can only leave his home if accompanied by one of the five sureties who posted more than $250,000 in bail.

In July 2009, Dr. Diab was hired by Carleton University to teach a summer course. After teaching four sessions of the course, Dr. Diab’s contract was abruptly terminated by the University administration without any explanation. The termination of Hassan’s teaching contract represents a serious violation of the right of an accused person to the presumption of innocence, and the responsibility of a university to protect its autonomy from inappropriate political pressure.

At an evidentiary hearing in December, 2009, Dr. Diab’s lawyer drew the court’s attention to the fact that the French case relies heavily on unsourced intelligence of unknown and untestable reliability. He informed the court that intelligence experts are prepared to testify about the unsuitability of intelligence as courtroom evidence. In addition, world-renowned handwriting experts are prepared to refute evidence tendered by the French authorities as “demonstrably false”. On December 11, the judge ruled that the defence may call University of Toronto law professor Kent Roach to testify on the issue of intelligence as evidence. The defence may also file reports from all four handwriting experts, and won the right to call any two of these experts to testify at the extradition hearing.

The extradition hearing was scheduled to begin in January 2010. However, on December 18, 2009, the Crown Attorney requested an adjournment of the hearing to review the defence evidence. On May 17, 2010, the extradition hearing (scheduled for mid-June 2010) was thrown into limbo once again when the Crown announced that the French are withdrawing the handwriting evidence after it was discredited by experts for the defence. See Latest News for the most current information on Dr. Diab’s case.

In the meantime, Dr. Diab is required to abide by very strict bail conditions, and is unable to find work. The delay in the extradition hearing is adding thousands of dollars to his legal expenses.

Why You Should Be Concerned

The little evidence France claims to have against Hassan is primarily bald, unsourced and conclusory intelligence information that would never be allowed as evidence in a Canadian criminal court. Intelligence is not subject to built-in procedural assurances of reliability and full disclosure, including the ability to confront and cross-examine witnesses. Therefore, the defence cannot demonstrate weaknesses or inaccuracies, and cannot argue against false claims.

Dr. Diab is in a double-bind. In Canada, his opportunities to challenge France’s evidence, including intelligence, are extremely limited because an extradition is not a trial. In France, Hassan will find that the same secret intelligence can be used at trial, but once again his opportunities for challenge will be severely restricted; any attempt by the defence to cross-examine witnesses or call exonerating evidence will be looked upon unfavorably by the court. Essentially, neither Canadian nor French judges and prosecutors know the sources of the intelligence information, and there will be no opportunity to probe this material in either jurisdiction.

France has been criticized by human rights organizations for violating internationally recognized due process standards and for running unfair trials. In July 2008, Human Rights Watch issued a report entitled Preempting Justice: Counterterrorism Laws and Procedures in France, that details human rights violations in the French legal system. In practice, the French legal system allows a very loose evidentiary standard and grants sweeping powers and discretion to the examining magistrate (juge d’instruction). Charges can be brought based on evidence that would not withstand scrutiny under an adversarial legal process.

The nature of the allegations against Dr. Diab suggests that intelligence saturating the case comes from Middle Eastern sources. Canadians should ask themselves if they are prepared to accept that a Canadian citizen can be extradited based on information that may be the product of torture. This is particularly disturbing in light of the cases of Maher Arar, Abdullah Almalki, Ahmad Abou-Elmaati, Muayyed Nureddin, and Abousfian Abdelrazik, as well as the recent allegations that Canadian troops in Afghanistan handed detainees over to local authorities with the knowledge that they would likely be tortured.

France’s botched handwriting analysis and fanciful interpretation of other evidence in Hassan’s case carries a distinct odor of incompetence. Dr. Diab’s lawyer has shown that French investigators tailored the intelligence in contradictory ways to make it fit the evidence. None of this should instill confidence in the intelligence information.

Shockingly, the Canadian Crown Attorney handling the extradition case seems to agree with France that secret intelligence can be used to extradite a Canadian citizen. However, Canadians should not let their legal principles become compromised by France’s apparent indifference to legal and ethical quandaries arising from treating intelligence as evidence in criminal cases. Dr. Diab’s case will establish a dangerous legal precedent if a Canadian court allows unsourced intelligence of unknown, untestable reliability to be used to extradite a Canadian citizen.

Speaking in December 2009 on the Carleton Midweek program about the Diab case, Paul Champ, a human rights lawyer with Amnesty International observed, “If the Canadian government and the French government are able to rely on this kind of intelligence information to support an extradition, I think it’s yet another step in the erosion of civil liberties that we’ve been familiar with in Canada and in other countries for a very long time”. Canadians should be deeply troubled by the serious threat this case poses to their rights and freedoms.

To learn more about Hassan Diab’s case and what we can do to help, click here.