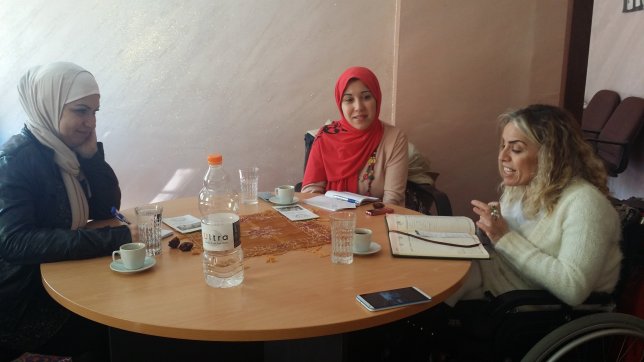 The aroma of hookah smoke pierces the air and finds its way to me as I walk down one of Amman’s most traditional streets in Al-Balad, or Down Town. I follow a smell that leads me to stairs. After a long day, climbing a few stairs is not what I want to do. But I climb the crooked old stairs to find my destination: a café, the source of the good smell.

“Where would you like to sit?” the waiter asks me.

“I want a spot in the balcony where I can see people outside,” I answer.

He walks me to a nice spot. I sit on a chair facing the busy street and I order my favourite hot drink, sahlab, and hookah. I hear the noise and conversations of people: those in the café and walking in the street. The market is busy, it’s the place where tourists and even Jordanians buy local products, especially dresses, jewelry and arts.

As I stare outside, I feel something is missing. There are no accessible spaces on this beautiful street. And the only way enter this café is to take the stairs. Amman has few accessible places and I haven’t seen any of them yet. Throughout my visit, I hardly find a single person in a wheelchair. People with disabilities are marginalized and face immense challenges. Like in any other segment of the community, women and girls are the most affected by marginalization. But I met some of the warriors who are determined to fight back.

“As women with disabilities, if we don’t make our voices heard, no one is going to listen to us,” Asia Yaghi told me.

Yaghi enters the room, on her wheel chair. She drives every morning to the I am Human Society, which she leads, to advocate for the rights of people with disabilities. She introduces herself, filled with enthusiasm and passion despite her recent tragedy: she lost her family in a car accident. Her smile and laughter makes me unaware, or forgetful, of her grief. In a country where there are hardly any accessible places — offices, schools or even entertainment spots — Yaghi is determined to politically, socially and economically empower women with disabilities.

Yaghi is finely dressed, as usual, and she tells me about the awareness programs that her team are working on. I am Human asks street vendors to remove boxes thrown on the street pavement make the vendor and street more accessible. The group also makes employers in banks and public service buildings aware of how to turn their offices into accessible spaces for all. “We made them aware that we exist and we have to exist,” says Yaghi. Layla Nabhan introduced me to Yaghi at an event. Nabhan is a leading active member at the I am Human Society and is currently pursuing Masters in Human Rights. During the event she greeted me, smiling.

“Would you like to meet Asia?” she asked while searching YouTube on my phone to show me videos of Yaghi hosting a show on national Ro’aya TV about the rights of disabled people in Jordan. During the event, people, especially women, surrounded Yaghi. I didn’t get a chance to talk to her.

Yaghi and her team travel to several parts of Jordan and reach out to people in rural areas. They are determined to counter the mainstream ableism reinforced by stigma and taboos, especially around women and girls. Women and girls with disabilities face discrimination, even within their families.

Yaghi recalls a story that left an impact on her. One of the women in an awareness program complained about her daughter’s hygiene, worrying she was less of a “lady” than other girls. Yaghi argues that some families do not treat the girls with disabilities in the same way as their other children, who have childbearing prospects. Later, that same family blames their daughter for not meeting societal expectations.

Yaghi now faces a challenge: political empowerment of disabled women. In a country with low political representation of women as elected parliamentarians and other positions, Yaghi is determined to make sure that women with disabilities have their voice heard. I am Human Society has provided training to its members, equipping women with the skills to be political leaders.

I met two of I am Human’s members, who have been working with I am Human to run for elected office: Nabhan and Shireen Hussien. Hussein lip-reads while I ask her questions. She has a Master’s in Education, and vows that if she is elected to be a parliamentarian, she will make the educational and learning systems more accessible for people with special needs. Nabhan to travel the world will and work on promoting “the independent living of women.”

“She is 30 or 40 years old and she still depends on her parents or brother. I will help women to live independently,” says Nabhan with a smile.

Putting words on paper and raising awareness are great steps towards I am Human’s goal: smashing ableism that hinders women and men with disabilities from living their lives independently. However, in a country restricted by gender biased cultural norms and laws, ending discrimination against women with disabilities appears to be mission impossible. Despite that, women at I am Human Society are filled with the hope that one day they will be represented in the parliament.

Yaghi hopes her “optimism and love” will help her enact change in this world and lead others at I am Human Society to believe in themselves.

This Project was carried out with the aid of a grant from the International Development Research Centre (IDRC), Ottawa, Canada.