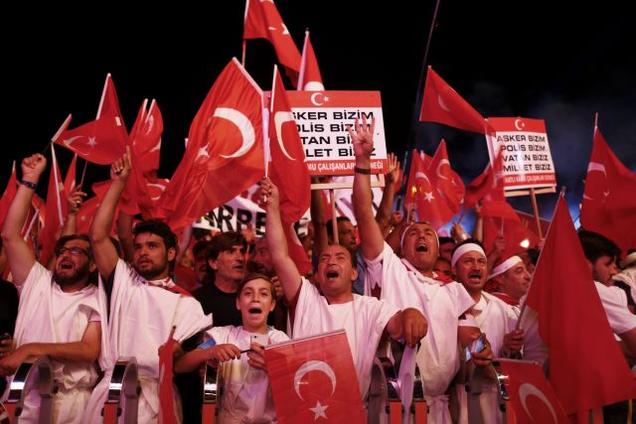 War of the Worlds

A killer truck ploughed through a festive crowd in the French Riviera town of Nice on the national holiday of July 14, at just the time when Donald Trump was on the other bank of the Atlantic, in the last stages of picking a running mate for November’s US presidential election. His choice fell finally on a nondescript mid-western state governor who brought evangelical heft to his ticket, but little value to the blank slate of his foreign policy expertise.

Verbal aggression being his stock response to challenging situations, Trump reacted to Nice by calling for a formal declaration of war on the Islamic State (IS), which was reflexively blamed for the heinous crime. The IS for its part was eager to own responsibility, though there is sufficient ambiguity about its command structures to suggest that it mostly wakes up after the fact to the terror potential of events.

The atrocity in Nice has yet again raised that question about when a deranged criminal’s act crosses the terrorism threshold. Attributions to the IS are loosely based upon a directive going back two years from somebody claiming the mantle of its spokesman, demanding that every westerner at any time or place, should be dealt with severely, with a full range of options — from suicide bombing, to stabbing to defenestration — being advised for the ritual slaying.

In terms of public knowledge, this psychopathic rant of uncertain attribution is the basis on which the world is invited down a pathway to unending war. Nobody is aware of the wisdom secreted in the vaults of the world’s intelligence agencies. These would probably hold definitive information on the nurturance of the IS by western allies such as Saudi Arabia and Turkey, anxious to retrieve a situation that was slipping out of control after the disaster of the US invasion of Iraq.

Uncertainties over the parentage of the IS do not seem to cast a shadow over the blame it draws for every atrocity of the new world disorder. As the French defence minister Jean-Yves Le Drian put it, it was immaterial what organisational input IS had in the mass murder at Nice, since the “terrorist spirit” the group inspired was sufficient. The ample gaps in this narrative, presumably, are easily filled in by old-fashioned racism.

What would a formal declaration of war add to the authorisation granted in 2001 during the George W Bush presidency, which he and his successor have used to enlarge the footprint of the war to places that had nothing to do with the event that triggered it all? Very little, but Trump’s hyperbole — after years of buyers’ remorse following Bush — stirred up war lust yet again and drew a “me too” response from rival Hillary Clinton.

The war that Bush summoned the world to was one without territorial locus, since terrorism was an intent that could exist anywhere. Trump’s call for war dignifies a shapeless militia with a territorial identity, making its fantasy of a “caliphate” something of a self-fulfilling prophecy.

This comes at just the time the IS was for the first time facing the possibility of being uprooted from its redoubts in Syria and Iraq. Forces loyal to Syrian president Bashar al-Assad have, with supporting Russian airpower, mounted a fierce assault on IS positions in Raqqa province in recent weeks. Along another frontline, the US has mobilised its clients in Syria to turn their fire away from the Assad regime and take on the IS.

There is little coordination between the two, though Russian foreign minister Sergey Lavrov and US secretary of state John Kerry agreed at a recent meeting that this would in principle be a good thing. At the minimum, military coordination would require the two sides to align their currently discordant strategic objectives.

If coordination between the US and Russia becomes a reality, the space available for third party ambitions would rapidly close. With objectives deeply at odds with both the US and Russia, Turkey would likely be squeezed out.

Turkey has, in other ways, been the perfect illustration of how vassal states step out of the shadow to assert their own ambitions when the power of the imperial overlord is fraying. For president Recep Tayyib Erdogan, the effort to recreate a Turkish sultanate as the centenary of its demise approaches, runs alongside a ruthless drive towards untrammelled power at home.

It has been a rocky pathway, with blowback from military adventures in Syria and Iraq often blurring into provocations staged by Turkish intelligence and security agencies to discredit the president’s domestic political opponents. With civil war reignited within his borders, Erdogan has sent his army to occupy a vast swathe of Iraq’s Kurdistan provinces to pre-empt any possible cross-border consolidation of Kurdish might.

Turkey has been rattled by the alignment of Syria’s Kurd forces with the US in the battle against the IS. It has retaliated by providing transit rights for IS oil shipments from areas it controls in Iraq. Yet Erdogan is now finding it virtually impossible, even with his formidable political skills, to manage this strategic tangle.

The army uprising of July 15 was indication that Turkey’s fragile institutions could buckle under pressure. Erdogan reacted with a mass purge and arrests that have shaken the country’s armed forces and judiciary. Turkey’s modern day sultan remains as ruthlessly focused on his personal aggrandisement as ever. The strategic quagmire he has taken the country into, could well prove his nemesis.

(Sukumar Muralidharan is an independent writer and researcher based in Gurgaon)