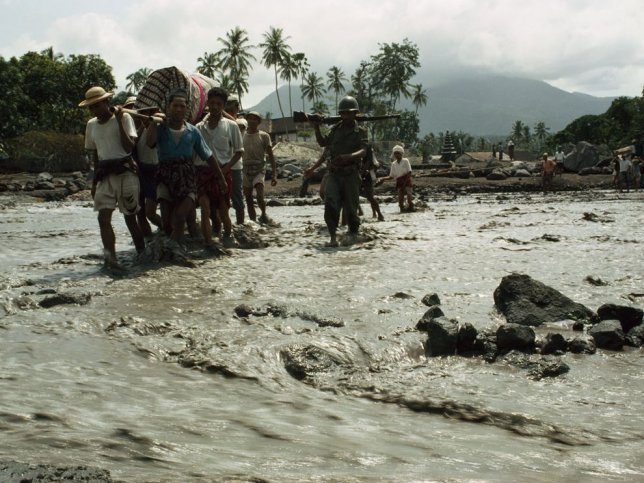 Bangladesh is one of the most vulnerable countries to the impacts of climate change. Floodplains occupy 80% of the country and every ten years around one-third of the country is severely affected by floods from heavy rain. In catastrophic years such as 1988, 1998, and 2004, nearly 60% of the nation was inundated.

Human-induced climate change has increased rainfall volume in Bangladesh and intensified the flooding problem. Bangladeshis living in poverty are the hardest hit by flood disaster as they lack adequate means to protect themselves, their homes, and their livelihoods. Further, the poor often have low levels of capacity to bounce back from losses and damage to property and income.

Bangladeshis living on the coast face a particular set of risks as they are highly exposed to cyclones and coastal erosion. Cyclone Aila, for example, displaced over 2 million people from southwest Bangladesh in 2009. Many have not been able to return to their homes and a permanent solution for many families has been to relocate to urban centres across the country.

When climate migrants settle in cities, they often move into dense informal settlements. Bholar Bosti, for example, is a slum in Bangladesh’s capital, Dhaka, named after the quickly disappearing island of Bhola in the south of the country. Fifteen families moved from Bhola to Dhaka in 1996, and the settlement has grown 40-fold since. Displaced people who previously worked as farmers or fishermen now take up low-skilled employment in rickshaw-pulling, domestic work, and garment work.

The cities, however, are not immune to the impacts of environmental change. Most of Dhaka is less than three metres above sea level and many of the city’s informal settlements (slums) are located in supposed no-development zones assigned for stormwater drainage. Climate scientists predict that river flooding and monsoon rains in Dhaka will become even more frequent and intense due to human-induced climate change, putting extra pressure on flood prevention and drainage infrastructure.

Bangladesh’s national and local governments have been unable to adequately serve vulnerable migrant citizens from natural hazards. Addressing expansive infrastructure demands and deficits in housing and basic services, especially the 40% of the Dhaka’s population who live in slums, remain significant challenges for government authorities.

Despite Bangladesh’s poor position to cope with climate change, there is space for the global community to help developing countries deal with climate-induced migration. The United Nations Framework Convention on Climate Change (UNFCCC) meets yearly at an event called the Conference of the Parties (COP). This year’s conference will take place in Paris, France in December, and negotiators from across the world will seek to agree on new mitigation targets: they will negotiate how much each country should reduce their carbon emissions.

Reducing global emissions is important because it helps slow the rate of climate change, but in the case of Bangladesh the impacts are occurring and millions have already been displaced from their homes. For this reason developed countries will also be expected to commit a significant financial amount to help developing countries adapt to the effects of climate change.

The Green Climate Fund (GCF) is the centrepiece of the climate finance endeavour and it is intended to raise $100 billion a year by 2020. In Bangladesh, vulnerability-reductive coastal infrastructure and resilience-building social policies are constrained by a lack of adequate financing. Therefore funds from the global community can go a long way to protect citizens from the impacts of flooding, cyclones, and coastal erosion.

The money in the Green Climate Fund should not be viewed as charity or aid, but rather as direct payment for the loss and damage caused by the polluters, the developed countries, to the citizens of developing countries such as Bangladesh.