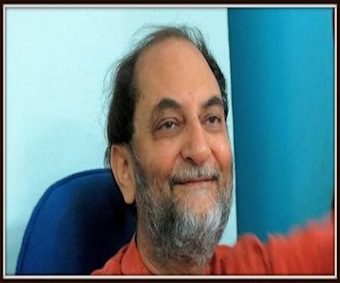 It is very difficult for me to believe that Vinod Raina is no more with us. Rarely I have come across a person with so much energy and drive. Four years ago he knew that he had cancer. In those four years I met him on different occasions in Montreal, Paris, Delhi, Dhaka and Tunis. I never saw him tired or shying away from a task. Never did he complain about his condition. In fact, he shared the fact that he had cancer with a very small number of people.

For the first time in these four years he wrote to me about his illness on 23 August 2013 “Dear Feroz, I am pretty unwell and likely to enter chemo soon. If you feel like you may discreetly inform friends…love, Vinod”. And twenty days later he passed away.

I have known Vinod for over two decades. He came to Montreal many times to participate in activities of our organization Alternatives. Each time he stayed with me. We shared the passion of Indian classical music and cooking. At our place once he spotted a CD cover of a raag (song) he wanted to copy. The box was empty. Very patiently he opened a few hundred boxes I had thinking I must have placed the CD in some other case! But unfortunately we did not find it. The year after when I met him at his house in Bhopal he made me listen to the same raag on his computer! He loved singing poems by Faiz Ahmad Faiz and always carried a book of poems in his bag. He cooked us delicious Kashmiri food. The room where he always stayed in our apartment is called ‘Vinod Chacha ka kamra’ (Vinod uncle’s room) by our daughter.

After completing his PhD in theoretical physics he became a professor at Delhi University. He resigned from this job and went on to develop the Hoshangabad Science Project in Hoshangabad district in the province of Madhya Pradesh in India. Later he co-founded Eklavya which worked in developing science curriculum in schools. This was the precursor to the National Curriculum Framework of 2005. He started working closely with the all India literacy movement and became the general secretary of the Bharat Gyan Vigyan Samiti.

He was attracted towards the world social forum process from the very beginning in 2001. It was at an Alternatives meeting in Montreal, I clearly remember, a year after, that a dialogue between him and a group of Brazilian activists started about possibilities of moving the forum to India, which finally took place in Mumbai in 2004.

Vinod’s work as an educationist and his contribution to the Right to Education bill in India is well known to all. But few know that he wrote the proposal to organize the World Education Forum in Palestine. The forum was officially launched in Ramallah, Palestine with a press conference addressed by him in April 2010.

Vinod passed away on 12 September 2013. His wife and companion Anita Rampal wrote to me “He fought to the last, never giving up, until the last hours when he felt his body was giving up and he then whispered to me saying he wanted to be liberated. I am haunted by those moments with him, but will move out, keeping up my commitment to the same work and ideals we have shared for decades.”

I wish my heartfelt condolences and all the courage to Anita and all his family and friends.