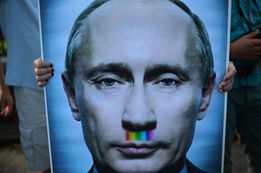 Uganda and Russia’s Crusade Against its Sexual Minorities

The various global movements that have been sparked in defense of LGBTI rights during the past century can be charted according to a series of victories, including increasing decriminalization of same-sex relations and the slow but steady legalization of gay marriage.

While the universal recognition of LGBTI rights remains an ideal, the most salient and powerful tools that are impeding its progress are those used by a nation’s judiciary system; namely through the discriminatory laws, bills and legislations that purport to protect traditional family values. For a society’s laws do not merely reflect its values – it regulates them.

The most recent of such endeavors includes Uganda’s Bill 18, also known as the “The Anti-Homosexuality Bill” which criminalizes same-sex relations and threatens life imprisonment for committing a homosexual act and suggests the death penalty for aggravated homosexual acts. Initially proposed in parliament in 2009 and 2012, the bill re-surfaced for consideration this February and is seen by many as making an explicit reference to homosexuality in response to an otherwise vague law that criminalizes “unnatural [sexual] offences”.

The bill would further encourage suspecting individuals to report those believed to be gay and would also abolish LGBTI organizations in Uganda.

Notwithstanding the bill’s implications for sexual minorities, many Ugandans are skeptical of its ostensible purpose as a means to protect traditional family values, while they believe the bill functions instead as a tool that guarantees to become a “popularity booster”.

Transparency International lists Uganda as the 17th most corrupt nation in the world and the second most corrupt in East Africa where these ranks reveal the public’s cynical attitude towards politicians, judges and the police.

Considering the mounting internal and external criticism of Uganda’s corrupt government, it’s no surprise that parties and politicians tainted with a bad reputation should wish to reinvigorate their images by tapping into traditional sentiments and values and manipulating them into the formation of a bill that promises to protect traditional values. In other words, Uganda is already an LGBTI un-friendly nation, but the passing of bill 18 would promote – or rather, legalize – active hostility and discrimination towards sexual minorities.

At another corner of the globe, Russia is receiving considerable flak from the international community for its recent attempt at stifling public expression of LGBTI content. This June, Russian parliament has drafted a legislation that imposes a fine for “propaganda of nontraditional sexual relations to minors”.

Since 2006, it was originally introduced as a regional law across 10 separate regions in Russia, but it has now culminated to a federal law and it validates the nationwide banning of LGBTI advocate groups and pride parades.

As article 6.21 of the Code of the Russian Federation on Administrative Offenses proclaims:

The article ambiguously suggests that the ideal of traditional sexual relations is at risk of being infiltrated by “devious” influences, without elaborating on what these traditional relations are and who they include. The vague wording of articles such as these and bill 18, however, is intentional and strategic. As the Russian and Ugandan governments define public support of LGBTI rights as propaganda with a licentious agenda, they are in effect, attempting to position themselves as heroic forces fighting the evil influence of nontraditional sexuality.

As long as sexual identity is understood in dichotomic terms, heterosexuality is aligned with tradition while non-heterosexuality is seen as its threatening opponent. It is also worth noting that public discourses on non-heteronormative sexuality is at its preliminary stage in most conservative societies. Thus, such a simplistic binary of “good” and “bad” sexual identity is conveniently implanted in public discourse with the aim of reinforcing the need to defend the status quo of traditional values. In a state’s attempt at regulating discourse surrounding sexual identity, it ultimately strives to maintain the status quo of its own governance.

As any society experiences the ebb and flow of social, political and economic change, traditional values are held to be the only stabilizing force that glue a nation together. In light of such desire for political and economic change from the Ugandan and Russian peoples, it is convenient for their governments to wage a battle against their sexual minorities to display themselves as upholders of that which is good and stable.

It is telling that the proposition of these laws is coming into effect at a time when their respective governments are bearing the brunt of bad publicity. What better way to revive national solidarity than by arousing the traditional sentiments of an already disgruntled people, and distracting them from the real issues that are plaguing their nation?

How then, do we come to explain such instances of regression when the world is undergoing a tide of victories for LGBTI rights? Perhaps they should not be viewed as regressions after all, but as necessary obstacles; obstacles that would force marginalized communities such as the LGBTI to emerge out of the fringes of their societies and find a platform within the mainstream to voice their fundamental right to live and not merely exist.