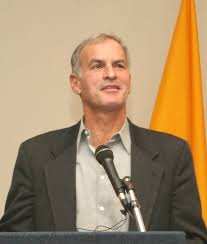 Norman G. Finkelstein is a well-known...

Norman G. Finkelstein is a well-known American writer of Jewish origin, and has gained particular recognition for his works on the Israel-Palestine conflict. He has replied the questions of the World Bulletin.

Finkelstein is best known for his famous book ‘The Holocaust Industry’, which claims that the holocaust was misused by the US and Israel to legitimize their politics. He also believes the Holocaust has been used by the Jewish lobby in the US in different ways as a money making tool.

Finkelstein is the author of eight books that have been translated into 50 languages.

Levent Basturk – I will ask about the Palestinian peace process right now, the one being initiated, I know that you are in favor of a two state solution. But do you expect that, from what Kerry initiated, there’s going to be a solution on the way, or there will be some problems, or some steps were wrongly taken and it won’t reach anywhere?

Dr. Norman Finkelstein - First of all some clarity, I am not in favor of a two state solution. I don’t think these questions should be asked or answered in terms of personal preferences. Political questions can only be answered and asked in terms of what’s politically feasible at a given point in time— that it’s more feasible and somehow approximates justice. The only feasible solution right now is two states because there’s no international support for anything else. You look at the UN, you look at the International Court of Justice, you look at human rights organizations, they’re all saying the same thing— two states. And there’s no evidence that this particular consensus is changing. It’s a quite hard consensus, that two states is the way to solve the conflict, the Israel-Palestine conflict. So I do not express my own personal preference. It’s based on an assessment of the balance of political force in the world, and the balance is in favor of two states and I see no evidence of a shift to one state. There’s nothing I see that suggests that political opinion, public opinion, legal opinion, human rights opinion is shifting in favor of one state. All I see so far, right now, it’s a hardened two state consensus. As for Kerry and the US, they’re not interested in two states. They’re interested in one state for Israel, a larger state than it is currently. And the Palestinians will be left with some fragments of territory, and at some point a suggestion, a recommendation will be made to confederate those fragments of territory with Jordan, and these fragments of territory will get to exercise some form of local autonomy. That’s the US position. The US-Israel position is to extinguish Palestinian self-determination by annexing part of Palestine, the designated unit for Palestinian self-determination, annexing part of Palestine to Israel and the other part will probably be confederated to Jordan.

So in that sense what we really have right now is not a real peace process negotiation?

No, what you have right now is that Palestinians have never been weaker politically than they are currently, The implosion of the Arab world, the defeat of the Muslim Brotherhood, which means the defeat of Hamas, the political hopelessness of the Palestinian people and the complete corruption of the Palestinian Authority contributes to this weakness. Therefore there’s an opportunity now, because they’re so weak, to impose on them a settlement that will serve US-Israeli interests and deny Palestinians their basic interests.

Then, in a sense, the coup in Egypt has strengthened Israel’s hand.

It’s strengthened them in two ways. Number one, Sisi is just another version of Mubarak, which was one of Israel’s main allies. And secondly, the Palestinian organization Hamas made a tactical error by putting all of their eggs in the Muslim Brotherhood basket, and now the Muslim Brotherhood has been defeated.

Do you mean that the position they have taken during the Syrian conflict on the side of the Turkey-Egypt axis was a major strategic mistake on their side?

So double mistake, because Egypt completely collapsed and Turkey now sees more common interest with Israel to get in the Syrian conflict, so Turkey right now is in the process of completely restoring relations with Israel. At the expense of the Palestinians, they will work with Israel in order to get their way in Syria.

Do you really think that is the position Turkey is going to take?

How about recent comments that Hamas, right now, is again trying to realign its position and trying to get close to Iran and Hezbollah. Do you see that, or it’s just a speculation?

I think they will try, but the fact that they were so disloyal, the support that they are going to get from Hezbollah and Iran will be significantly less.

Hamas is desperate for anything right now so they don’t have that many options. And there’s an expression in English, beggars can’t be choosers, and Hamas is in the situation of a beggar now and it doesn’t have that many choices.

In Egypt, right now, the Muslim Brotherhood is out of the equation. Is the current Egyptian administration going to choose not to do anything regarding the Palestinian issue?

Then what’s happening to Gaza right now is an indication of that?

What are the prospects of that?

A lot of it is very hard to say. So long as the attention is distracted on Syria, Sisi could do pretty much anything he wants. Nobody’s stopping him.

So the Syrian conflict is a game changer in the entire region.

Dr. Finkelstein, thank you for giving us the opportunity to have this interview with you.