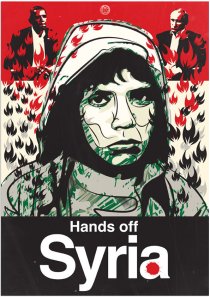 Syria, Intervention and the Anti-war Movement

When Barack Obama first warned Syria that its use of chemical weapons would facilitate the US decision toward military intervention in the Syrian conflict, it almost seemed like the President was implementing the first phase in a plan that would ultimately see the West intervene. To anti-war groups and activists, Obama’s red line statement reflected what has become a tradition in US foreign policy pursuits: establish a set of rules, wait until someone breaks them, and intervene to right all wrongs. Though explicit in nature, this mindset does little to encourage the resolution that diplomacy can achieve, and in no way does it address the fundamental and immediate human security concerns that should be raised within the context of a conflict.

Obama’s red line was (officially) crossed a year later when reports of a chemical attack came out of Damascus this past August, and the President was eager to remain true to his warning. With Western intervention in Syria seemingly imminent, the voices of groups and individuals opposed to war became louder and even more relentless. Though Western intervention in Syria remains a possibility (as well as an ambition from certain perspectives), it has at least been temporarily shelved and replaced with a more diplomatic strategy: a Russian proposal that Syrian chemical weapons be placed under international control.

Regardless of whether Russia’s diplomatic ambition serves as a starting point to non-violent resolution in Syria, or whether it only stalls an inevitable intervention from the West, the anti-war movement deserves to be recognized for its efforts and ability to urge decision-makers to broaden their perspectives with regard to Syrian conflict.

Firstly, public opinion polls reveal that Americans are generally opposed to a US-led military intervention in Syria, and would prefer a solution that is less confrontational. This sentiment has been reflected by a variety of petitions, rallies and vigils held across the country. While demonstrations opposing military intervention in Syria have attracted comparatively smaller crowds than those gathered to protest the invasions of Iraq and Afghanistan, there is a much smaller percentage of Americans who believe resolution can come through intervention.

Despite smaller crowds protesting Western intervention in Syria, online forms of activism have been numerous and widespread. Many Facebook groups have been formed opposing military intervention, and numerous Twitter hashtags dedicated to finding a diplomatic solution to the Syrian conflict have been trending. The extent of online activism reflects the evolution of social media and its use as a political tool that makes space for a broad spectrum of interests. The ability to share knowledge and ideas instantaneously has given groups and activists access to agenda setting, which the media and decision-makers would be hard-pressed to ignore. The accessibility that social media provides has certainly helped the anti-war movement shape public opinion and raise questions that might have otherwise went unasked.

Aside from encouraging an alternative to immediate military intervention, Russia’s Vladimir Putin published an op-ed article in the New York Times, entitled, A Plea for Caution from Russia. The Russian president’s piece was generally well received, and highlighted the need for diplomacy as a means of resolving the Syrian conflict, as well as strengthening US-Russia relations. Putin’s words have helped to strengthen the anti-war sentiment in the West, and may have also facilitated the recent US-Iran meeting in New York, held to discuss Iran’s outlook on its own nuclear program. Inclusive diplomacy makes for legitimate attempts at resolution that are sustainable, and hopefully Iran could be a key actor in finding peaceful answers to the Syrian conflict.

Though several anti-war groups and activists are claiming victory for their movement in the US, there is still a lot of work that needs to be done. Whether intervention has been taken off the list of options for the West, or whether it’s an inevitable action that has merely been stalled, the conflict in Syria continues. Taking a stance against war should mean being against all wars, regardless of whom they involve. Refraining from intervention should not be considered the endpoint and answer to the Syrian conflict, but the beginning of a more peaceful and sustainable route toward resolution. While military intervention would most probably worsen the human security situation in Syria, non-intervention does nothing to improve it, and that should be a priority for the West and the international community alike. It is unfortunate to see the wheels of bureaucracy turn so slowly while the number of Syrian casualties continues to rise steadily, but a real victory within the realm of international relations and Syria can set a standard that would see future conflicts resolved more quickly and through diplomacy, not militaries.

Refraining from military intervention is a welcome step in the right direction, but the next steps will reveal whether or not a collective victory for Syrians is a real priority for West.