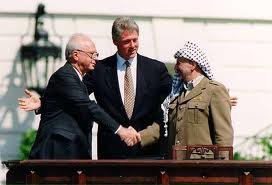 This September marks the twentieth anniversary of the Oslo Accords. The Oslo I Accord represented the most comprehensive first step in the resolution of the Israeli-Palestinian conflict, as it has culminated in the famous handshake between Yasser Arafat and Itzhak Rabin on the White House lawn under the proud gaze of Bill Clinton on September 13, 1993.

This interim agreement was designed to last five years, during which time the Israelis and Palestinians were to continue negotiations in order to resolve the most contentious issues of the conflict, namely, settlements, Jerusalem and the right of return for Palestinian refugees. While the accords formed the foundation of the means for self-government, i.e. the Palestinian National Authority (PNA), they did not, however, offer any significant assurances of independence, sovereignty or statehood.

Two decades later and no serious steps have been taken to ensure that the alleged intentions of the accords were fulfilled. Worse still for the Palestinians, the responsibility for the ensuing breakdown of permanent status negotiations was laid squarely and publicly at their feet, further fuelling the myth that Israel has no partner for peace.

In reality, however, the ultimate failure of Oslo in advancing a comprehensive peace process has its origins in the very basis of the process itself, particularly the insincere intentions of its two dominant actors: Israel and the United States.

The Oslo Accords were intended as a continuation of the road map for peace envisioned during the Madrid Conference in 1991, a year that saw increased regional and global instability and a significant weakening of the Palestinian side. With the collapse of the USSR - one of Palestine’s most prominent supporters - the instability resulting from the events of the first Gulf War and the winding down of the First Intifada, Palestine was left with weakened allies and combat fatigue after four years of brutal Israeli military crackdowns in the West Bank, Jerusalem and Gaza Strip.

It would be naïve, then, to believe it was a coincidence that the US felt this was the opportune moment to assert its increased global hegemony by leading an allegedly new and dynamic Israeli-Palestinian peace process.

Oslo I, much like the preceding Madrid Conference, was, in reality, established upon the pre-condition of an unequal balance of power between the negotiating parties; with one side, the victor, setting conditions and demanding concessions from the defeated. The Oslo process also deviated significantly from previous approaches to negotiations, through the insistent focus on political processes of bartering and conditionality - typified by the oft-used slogan “land for peace” - rather than the frameworks of international law and existing UN resolutions.

Additionally, as the accords were formulated as an interim process, little focus was given to the key issues that characterize the conflict: settlements, Jerusalem and refugees, water and the economy. With these issues shelved, there were no mechanisms or incentives in place to ensure that Israel would abide by international law. On the contrary, Israel saw the opportunity to use the temporary status of the accords to establish more facts on the ground, thereby creating new and advantages realities on which to build any future peace process. With Israel’s long-standing focus on security, the consequent creation of the PNA also afforded it the prospect of using the newly established Palestinian security and intelligence services for its own ends.

In contrast to the lack of incentives offered to Israel to abide by international law, the US offered a number of economic enticements to the Palestinians in return for political concessions. These promises of economic development not only formed the basis of a number of the accords and protocols, but also served to silence the Palestinians on the more contentious issues.

After ratifying the concessions outlined in the accords, the Palestinians found themselves in a worse position than when they had entered the talks, with an increasingly isolated Jerusalem, almost unabated settlement expansion and deepening internal political divides. This apparent failure of the Oslo peace process was a significant contributing factor to the outbreak of the Second Intifada in September 2000.

Yet, in light of the obvious failure of Oslo Accords, the current round of Israeli-Palestinian peace talks, again mediated by the US, are based upon the same shaky foundations and questionable tactics that ignore key issues and side-step international law and UN resolutions. There is little hope of these talks succeeding where Oslo failed. As long as the US acts in unabashed bias towards Israeli interests over Palestinian rights, its role as host and mediator is nothing but perfunctory. And as long as Israel continues to negotiate as a dominant power instead of an equal, it will continue to pay the price for being an occupier.

Just and lasting peace will never be reached if the dominant parties continue to wield that dominance at the negotiating table. The US cannot currently be trusted to act objectively. For there to be any hope for future negotiations, other parties such as Russia, the Arab states and the EU must disregard US pressure and return to their traditional roles of checking the balances of power to ensure that the interests of all sides are being considered and valued equally.

In this context, the potential for success is predicated on the fact that the first step for any just and comprehensive agreement must first and foremost be based upon international law. Israel must be made to realize that international law and the relevant UN resolutions are independent and inviolable, and that the observance of these laws is in no way contingent upon the willingness of the occupied to make concessions to their oppressors.

For their part, the Palestinians must also change their approach to negotiations, firstly by forming strategies for genuine political unity and secondly, by realizing that these talks are not a matter of diplomacy, but a means of resistance and changing the balances of power on the ground. This is vital because the final results of any future agreement will ultimately reflect the balances of power established during talks.

With the current economic crisis and the ongoing global upheavals and shifts of power, it is crucial that the Palestinians seize the opportunities for new partnerships and co-operations, and ultimately strategize as to how these shifting realities can be used to their advantage.