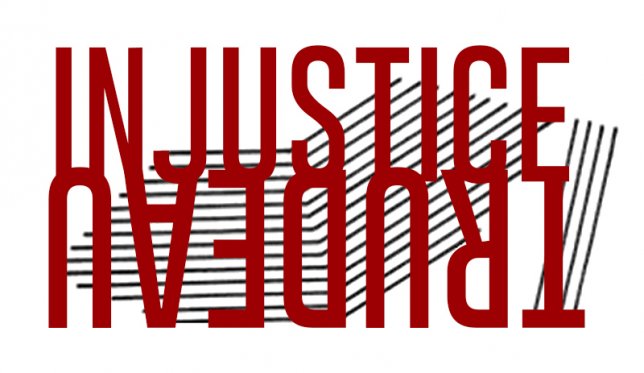 Justin Trudeau is failing to speak out against ongoing Israeli war crimes in Gaza, clearly illustrating a broader hypocritical and unprincipled political orientation.

Although the dynasty politician often deploys language that vaguely suggests a “progressive” orientation, most evidence points in the opposite direction.

As Israeli air strikes continued to obliterate young children, mosques and countless homes across Gaza, Trudeau is basically repeating reactionary and colonialist talking points, that have also been embraced by the Harper Conservatives.

“Israel has the right to defend itself and its people. Hamas is a terrorist organization and must cease its rocket attacks immediately,” reads a recent Liberal statement. Nowhere in the ridiculously bias, pro-Israel statement do the Liberals call on Israel to halt the ongoing bombing, or recognize any aspect of the immense suffering of Palestinians in Gaza. Trudeau hasn’t even backed the Obama administration and UN call for an unconditional cease-fire.

Instead of echoing these mainstream international cease fire appeals, Trudeau celebrates Israel’s “commitment to peace”, while inaccurately implying that the Egyptian military regime, responsible for many hundreds of extrajudicial killings mainly targeting the Hamas-aligned Muslim Brotherhood, is a neutral party.

As Israel continues to bomb Gaza today, with over 1,100 Palestinians dead, the vast majority civilians, including hundreds of children, Trudeau’s open complicity with Israeli war crimes is deeply telling of a political orientation that totally lacks any moral compass.

Beyond Palestine, Trudeau displays a consistent intentionality to choose the side of injustice over equality and justice, on a wide variety of both local and global issues.

Trudeau openly supports the ongoing expansion of the Canadian military, backing the procurement of new military fighter jets, even within the context of a ridiculous Conservative scandal over the issue. Trudeau argued in a CBC interview that the jets are a necessary “asset” for a strong “modern military.”

On the environment, lets look at the example of Trudeau’s actual position the oil sands in Alberta, that continue to expand under the Conservative government, destroying large swaths of indigenous lands. Trudeau, who often cynically suggests an environmentalist orientation but without many policy specifics, has actually not issued any principled critique on the oil sands. In reality Trudeau openly supports the oil sands, vaguely calling for greenhouse gas-emission limits, while fully embracing the destructive project.

Trudeau is playing political games in saying nothing critical about the fundamental environmental issues, claiming only that the Conservatives haven’t presented the oil sands correctly. “The fact is that the oil sands have somehow become a poster child for climate change. That is a failing of both government and industry for allowing that to happen because they weren’t doing enough to reassure people that the environment is a priority,” stated Trudeau, implying that more slick, state backed public relations work should be done by Canada around the oil sands, to smooth over the growing grassroots movement against the tar sands.

Internationally Trudeau has openly attempted to mobilize support for the Keystone XL pipeline, the symbolic adversary of environmentalist movements across North America, tirelessly fighting the ecologically dangerous project. Trudeau stated on Keystone “most of all, it is in keeping with what I believe is a fundamental role of the government of Canada: to open up markets abroad for Canadian resources and to help create responsible and sustainable ways to get those resources to those markets.” Sounds like the words of a corporate oil spokes person, not a hip environmentally oriented Liberal politician.

In reaction to the Keystone project the Indigenous Environmental Network articulates the nature of the oil sands as clearly rooted in a “colonial system of domination, the trampling of Aboriginal treaty rights, the same economic system characterized by racial oppression, economic exploitation and devaluing human life, and the environment and nature.”

On economics Trudeau has entirely subscribed to the neoliberal “free trade” orthodoxy that has so clearly only deepen economic inequality both locally and globally. Although having publicly acknowledging that the “free trade” model has done little for the majority, Trudeau openly backs the pending EU-Canada free trade agreement as illustrating a “strategic approach to trade.”

Critically the Comprehensive Economic and Trade Agreement (CETA) with the European Union has been moving forward in negotiations without any meaningful consultation with the First Nations peoples whose lands and resources will be deeply impacted by the trade pact. An agreement that the Council of Canadians describe “as a way to further deregulate and privatize the Canadian economy while increasing corporate power and undermining Canadian and European efforts to address the climate crisis.”

“CETA could unfairly restrict how local governments spend money and ban ‘buy local’ policies, add hundreds of millions of dollars to the price of drugs, create pressure to increase privatization of local water systems, transit and energy, and much more.”

Trudeau has offered basically no substantial critique of the pending agreement, instead siding fully with the trade framework of corporate power and the Conservative politicians who are backing the agreement.

Today as Israeli bombs are falling on Gaza, the Liberal party and Trudeau’s open support for the Israeli apartheid war machine illustrates a profound moral corruption that gives political space for the colonial dehumanization and dispossession of the Palestinian people.

On international economics and the environment Trudeau’s actual policy suggestions present no major shift away from the economically violent corporatism of the Conservatives that ignores indigenous rights, embraces austerity and fails to meaningfully address climate change.

Trudeau offers no principled political alternative to Harper, similarly to the current NDP, only another cynical politician aiming who works to deepen the unjust structures of political, economic and military power in our society and around the world.