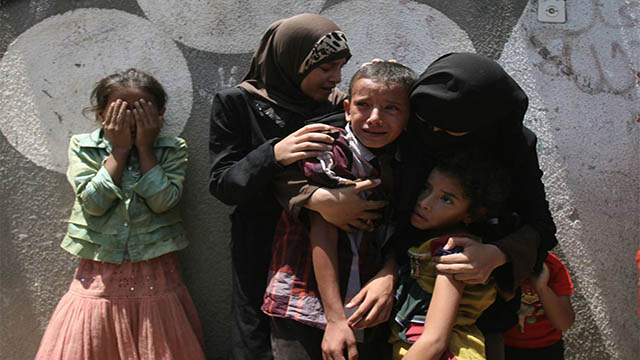 Another round of fighting, another massacre larger than its predecessor, another genocidal war and another failure. This is the future that the state of Jews promises for its citizens and residents of the area.

It once again becomes apparent that the sole factor threatening the citizens of Israel and endangering the lives of its residents and the surroundings is not Iran, not Islam and not the Arab world, but the insane leadership of this country.

Following a campaign of punishment and revenge in the West Bank, Israel commenced one of terror in Gaza with the goal of harming, destroying and also killing Gaza residents, as well as the Palestinian attempt at unity between Hamas and the Palestinian Authority. Instead of exploiting the unity agreement as a lever for conducting negotiations with a united government that recognises its existence, Israel - as is its custom - turned to an additional war.

Another chapter in an ongoing war, the goal of which is to continue transferring historical Palestine into the hands of the Zionists and to get rid of the unnecessary indigenous population. In Israel war is not a continuation of policy using other means, but politics is a continuation of war using other tools.

The cynicism of Israel’s government can compete only with its cruelty. Less than one day after the kidnapping of the three Israeli teenagers last month, the government knew they were no longer alive, yet hid this from Israeli citizens and the entire world. Under the disingenuous slogan "bring back our boys", it was possible to conduct a new campaign of terror and punishment against the Palestinians, to bring Abu Mazen to expose himself as a sub-contractor of the occupation who publicly identifies with the goals of Israel, and to whip up an insane hatred of Arabs within Israeli society which resulted in pogroms and even murder

An additional important front was opened by exploiting the mothers of the kidnapped/killed in an international propaganda campaign, ostensibly for the supposed return of those kidnapped, by concealing their death, but actually for rehabilitation of the victim image of the state of Jews, and to collect support ahead of the attacks on the Gaza ghetto.

For eighteen days thousands of soldiers conducted searches in the Hebron area, during which they detained hundreds of people and caused extensive damage to thousands of homes which they supposedly searched for the kidnapped teens. It is possible to assume that the kidnapping itself, both its planning and implementation, highlights a deep divide within the Hamas movement. While the leadership reached agreement with Abu Mazen, an agreement which includes de facto recognition of Israel, parts of the movement feel betrayed and are attempting to conduct acts of armed struggle not only to harm Israel, but also in protest of the leadership’s "surrender".

Despite this, Israel, which didn’t plan for one moment to recognise this same undeclared surrender and attempt to deal with the Palestinian agreement, declared with no proof that the Hamas leadership is responsible for the kidnapping and killing. The fact that there is no command structure of the movement in the West Bank did not prevent Israel from detaining all prominent Hamas activists in the West Bank and even to re-imprison those released in the October 2011prisoner exchange. At this opportunity all of Islamic organisations in the fields of health, education and charity were shut down. The Hamas movement in Gaza could not quietly accept the attack on the movement and following long deliberations, it joined the campaign with missile fire on Israel. This campaign was begun in contradiction with the desire of the political leadership.

Israel’s expedition of punishment and revenge gave birth to furious reactions amongst the Palestinian citizens of Israel. The proverbial straw that broke the camel’s back was the murder of Mohammad Abu Khdeir of Shoafat in East Jerusalem by a gang of Judeo-Nazis, who were influenced by the incitement that poured from the government. The police deployed numerous oppressive forces against the protesters but, unlike October 2000, restrained themselves didn’t use (yet?) live fire against citizens. However, in the framework of its preparations for additional protests of Palestinian citizens, the police detained hundreds of young people, amongst them numerous political leaders.

The Hamas government in Gaza did not aspire to a head-on collision, and the Israeli terrorist government contends that it did not either. However, the expected Palestinian response was answered with shelling by the Israeli air force, extra-judicial killings - which are nothing more than the public execution of those sentenced to death without a trial - and the killing of fighters and civilians in Gaza.

The Hamas movement does not want all-out war as it would then lose not only people and weapons, but also the partial legitimacy that numerous countries gave it following unity with Abu Mazen. The difficulty in surviving the conditions of the Israeli siege, which prevents even payment of salaries to its forces, increased the need for external assistance. This help has thus far been prevented, primarily as a result of the sole Israeli achievement in this war: a deceitful and distorted propaganda campaign conducted by thousands of paid and volunteer Zionists. This campaign includes a presentation of Netanyahu’s "restraint", during which additional intelligence was obtained through brutal "ticking bomb" interrogations of detainees, the drafting of reserve soldiers and trainings.

Part two of the play represented the wave of declarations, showcase actions and false reports to the foreign and local media about our "concern not to harm civilians"; yet no more than 30 percent are fighters are amongst the dead while the others are civilians, women and children, completely uninvolved. This successful propaganda campaign permitted the slaughter of civilians.

Israel went into the war in an attempt to destroy the unity of Palestinians under on leadership, through the commitment of war crimes, killing of over 1,000 Palestinians (to date) and the wounding of over 6,000, although its interest is actually a continuation of Hamas rule. A serious loss to Hamas can bring about two possible results, neither of which Israel is willing to accept. The first is that there is one renewed authority in the Gaza Strip and West Bank, under the government of Abu Mazen. The world would then perceive Abu Mazen as president of the emerging Palestinian state and would seriously pressure Israel.

The second possibility is that a new organisation is created in both Gaza and the West Bank which would be part of the global jihad, thus transforming Israel into a new Afghanistan. The current ironic situation of the horrors being committed is that Israel will have to support the Palestinian unity agreement in order to reach a ceasefire. We can determine with certainty that even if Israel leaves the campaign as a "victor", the result will be defeat. This is the pattern of recent years, a pattern that emphasises the decline of the Zionist state and its lack of a way out.

Another round of fighting, another massacre larger than its predecessor, another genocidal war and another failure. This is the future that the state of Jews promises for its citizens and residents of the area.

This situation requires a revolutionary change. The national question in Palestine cannot be solved by wars, continued ethnic cleansing, a worsening of the apartheid situation, war crimes and being bogged down again and again in a swamp of blood. The completely opposite policy must be taken, as only it can allow the Jews of Israel to live in peace in this country. In the first stage Israel must get out of Gaza; stop the ethnic cleansing and killing sprees against the Palestinian people; to end the siege on the Gaza ghetto; and to release all political prisoners.

At this stage it is possible to state that the operational name given to this war in Hebrew ("Sturdy Crag", although Protective Edge" in English) is wonderfully apt for the sturdiness and steadfastness of Hamas for more than two weeks against the rapacious army of the fourth largest military power in the world. Hamas is standing firm, despite the international isolation, despite being cut off from its supportive Arab regimes and despite the suffering of Gaza’s population. Hamas is still standing despite the world’s silence and the flattery of Israel by world powers. And Hamas is standing longer than the army that beat all Arab armies in six days in 1967.

In the historical recounting of the Palestinian war of liberation war, Gaza will be remembered as the parallel to Stalingrad.

Eli Aminov was a member of the former Revolutionary Communist League (Matzpen) and founded the Committee for a Secular Democratic State. / Translated to English by Connie Hackbarth, Alternative Information Center (AIC)