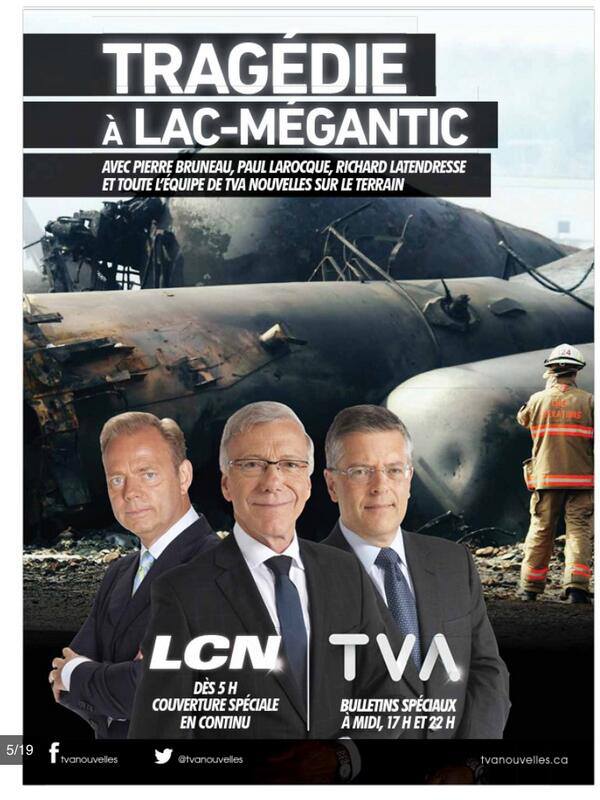 The vultures are back in town. Disaster capitalism and the role of the media

As my childhood home of Lac-Mégantic reeled in the wake of the July 6, 2013 derailment that left its center destroyed, journalists flocked to the small town. After the explosion my family and I were in a state of shock. Wanting to be of whatever help we could and to connect with friends who were affected, we went to the relief center that had been set up in the local high school. Journalists were everywhere, resembling an organized tour. Their tents, logos predominantly displayed, were pitched around the entrance to the relief center. There they stood representing the world media, competing for tent space while studiously adjusting their hair and fiddling with equipment as a woman announced upcoming news events over the microphone like a summer camp tour leader. Traumatized, confused citizens had to negotiate their way through this gauntlet in order to enter the relief center.

In the aftermath of the disaster, encouraging tourism became central to the recovery plan and positive reports on efforts to regain a sense of normalcy began to surface. A benefit concert was organized at the Bell Center in Montreal to help raise money for the rebuilding of the town. This was followed by a much-publicized visit to Lac-Mégantic by the Montreal Canadiens hockey team. Soon after, to the ire of many, it was announced that a train loaded with tourists would be stopping in Lac-Mégantic as part of an effort to draw tourist dollars to the region. Although the idea of a "tourist train" was dropped, a lot of people in the community feel that even the suggestion that a train ride be involved in a tour of the town makes a mockery of, and indeed capitalizes on, the town’s plight. The fact is that the trains were one of the first things to get back up and running in Lac Mégantic. The mayor made a pointed statement that anyone feeling negatively affected by the renewed presence of the trains in the community should seek psychological help. Indeed, several members of the community who I know personally have ended up in the psych wards of hospitals in the area or have simply remained bedridden with what looks like undiagnosed PTSD.

Train or no train, visitors to Lac-Mégantic came in droves in order to see first-hand the disaster zone that the guy in the suit with the great hair told them about on television. They might even snap a selfie in front of the gaping crater that used to be our local pub, where my sister sang on weekends. This feeling of being used and abused persists in the local citizenry. Driving through town the other day I observed a group of smiling tourists getting a group picture taken in front of Lac-Mégantic’s ground zero. ’’Say cheese’’, I thought to myself.

In the immediate wake of the disaster, the majority of people in the Lac-Mégantic region with whom I spoke were appreciative that the media was involved in exposing their plight. Despite some being weary of repeated interviews, they trusted that the media would help ensure that their best interests were served. Only a few months later, however, the tone had drastically changed. At the corner store on the day of the one-year anniversary of the disaster, a man referred to journalists as vultures sucking on the dead corpse of the community, profiting from their pain. Musings in the community have equated the media’s conduct with what Naomi Klein would call "disaster capitalism". Increasingly, journalists are being seen as profiteers who exist not to help promote the interests of the afflicted population, but to sell their suffering in an unholy alliance with the disaster tourists. Many a whispering voice contends that important stories are being under-reported in favor of lighter “human interest” subjects and dramatic, cheesy sob-stories that trivialize their grief. The complicity of journalists in this ongoing disaster capitalism is nowhere better-illustrated than in a conversation that I witnessed on social media in the days following the explosion. An aspiring journalist bragged about the boost that covering the disaster would give his career. Others chimed in with supportive comments along the lines of “this is awesome.” To my great embarrassment for the future of the profession, no one objected.

A year later, the selfie-snapping, logo-loving, perfect-hair- combing, camera-happy media was back in town. The vultures smelled more meat on the corpse that they had left for eaten and came swooping in for another go at it. This time around their angle has been less macabre. The “Lac-Mégantic: One Year Later” story focuses on the rebuilding of businesses along a small strip of pavement that has been designated as the new town center, and on the memorial services at the remaining Catholic church (the other one was torn down to make way for a new supermarket). Once again, the media is missing the point. Calling for tourists to visit the town in order to help its economy grow is one thing, but what I see is a grieving community being turned into a circus of public grief, while bigger issues are being ignored.

The reconstruction of the town is an ongoing and contentious issue. Contracts were allocated in an atmosphere that has inspired members of the community to whisper of corruption in the air, but all I see on television is a guy in a suit with great hair, perfectly silhouetted in front of Ground Zero. Where is the Charbonneau Commission when you need it?

Because of a real or perceived lack of access to relevant information, a group of concerned citizens has begun organizing community meetings to discuss environmental as well as economic and social implications in the aftermath of the disaster. The citizens of Lac-Mégantic have to be content with their own commission of inquiry, away from Montreal’s cameras, away from public view and away from any of the power of a Montreal courtroom. This would be unnecessary were the media to develop a passion for gathering and disseminating relevant information to the public.

Now that the fires have been put out and the tragic stories told, it is time to dig deeper. As the narrative of The Lac-Mégantic Disaster continues to unfold, it is time for the media to shift from retelling stories of grief and horror, making a commodity of the suffering of a community, to ensuring that the reconstruction of the town is conducted to the benefit of the local population, the environment and the greater national interest.

Whatever the outcome, we the media are as complicit - and as culpable - as anyone else.

Montreal Gazette article about the day of the disaster – By Michael Bramadat-Willcock http://www.montrealgazette.com/hometown+burned/8794271/story.html

The Mayor’s statement: The National Post: The town invited residents traumatized by the return of train traffic to contact psychosocial workers who have been made available. “To see a freight train passing again takes us back to July 6,” Ms. Roy-Laroche said. “We see these images again.” http://news.nationalpost.com/2013/12/18/first-trains-since-explosion-trundle-through-lac-megantic-as-residents-complain-of-psychological-distress/