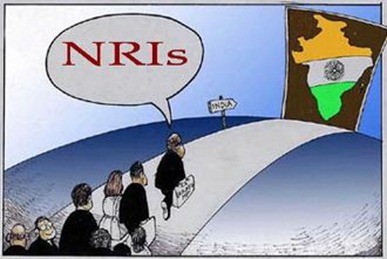 The Nationalist in the NRI

The Hindutva brigade aims to push the Indian diaspora towards a narrow and intolerant version of nationalism, which draws heavily from a Zionist-inspired narrative.

Citizenship is what makes a republic; monarchies can get along without it. — Mark Twain

The Non-Resident Indian (NRI), it appears, has never had it so good. The previous refrain about endless guilt for “abandoning the motherland” has now been officially turned around. In a fresh reinvention by Prime Minister Narendra Modi, the NRI today is a “brain gain”: a redeemable interest-bearing asset who is merely parked offshore.

This change aside, the recent decision to NRI-ise Indian foreign policy is without precedent. Instead of sticking to the otherwise bland routines of keeping head of state visits limited to strategic talk, the Modi dispensation has preferred to burst forward with Bollywood spectacle. The breathless razzmatazz diaspora events in New York, Sydney, Dubai, Toronto, San Jose, London, Kuala Lumpur, Singapore, and so on, were remarkable in the manner in which mere style was dramatised as tangible substance.

Whether it was the announcement of a new air route, or a generous self-assessment, or simple-minded claims about India’s coming greatness, Mr. Modi energetically performed rather than simply delivered a script. Whilst it might be a bit too early to conclude that Mr. Modi is indeed “India’s greatest Prime Minister”, the enthusiasm to reach out to the diaspora must remain one of the most curious initiatives to have been undertaken by an Indian government in recent times.

What explains the great irony of a “nationalist” party seeing a minuscule constituency of foreign citizens (1.71 crore), with no political and voting rights in India, as the focus of its politics? After all, this majority of NRIs are Indians who have given up their citizenship long ago, and many of the remaining 1.14 crore Indian citizens abroad may indeed also be queuing up to do so.

Origin of a new attitude

In great part, the scale and the type of imagination that is at play in this new official perception towards the diaspora, we suggest, draws from a not unsurprising source: the entwining by the early 2000s of Hindutva and Zionist lobbies in the U.S. Ingrid Therwath, in an insightful article (“Working for India or against Islam? Islamophobia in Indian American Lobbies”), explains how Yankee Hindutva-ism in recent decades has been able to successfully link up with powerful Zionist American lobbies primarily through shared Islamophobic beliefs.

It was reported that at San Jose, Mr. Modi had in the audience several members of the Zionist Organisation of America (ZOA) who were active in supporting The Indo-American Community of the West Coast’s efforts to organise the event. ZOA, moreover, stood out at the event “as the only one with no Indian or Hindu background or direct stake in India’s economic growth story.”

It is not, however, only at the level of association between the Yankee Hindutva and Zionist groups that one can connect the many dots of Mr. Modi’s penchant for speaking to the Indian diaspora. Rather, it is at the level of the Zionist imagination that one discerns the method in the madness. Zionism emerged in the 19th century as a political movement, which in several ways operated in reverse. It helped marshal ideologically charged Jewish groups, who were spread across several countries, to advance the idea of a Jewish homeland. In effect, the Jewish diaspora was crucial in creating the State of Israel in 1948, from what was for long Palestinian lands. The Jewish diaspora and many of its powerful lobbies, in fact, continue to amplify this historically crafted ability to both sustain and influence a narrow and chauvinistic version of Israeli nationalism.

The Hindutva template similarly aims to push the Indian diaspora towards a narrower and intolerant version of nationalism, which, in fact, draws heavily on the Zionist-inspired narrative about loss, the threat of Islam, sacred territory, and the recovery of some presumed cultural greatness. Long-distance chauvinistic nationalism as pseudo-patriotism, in effect, has become the pronounced ideological mission of Mr. Modi’s travels. At Singapore, the gathering was told that “India is not confined to territory. India exists in every Indian in every part of the world, India is in you.” In many ways, this is straight out of the most extreme variant of Zionism, which upholds a Jewish identity as rooted in the idea of displaced citizenship.

In the Hindutva imagination, the NRI as the displaced citizen, in fact, meets the full ideal of being a subject of empire rather than a citizen of a republic.

The concept of citizenship here undergoes a radical transmutation. It no longer connotes a politically engaged citizenry upholding the highest ideals of a democratic republic. Politics as Bollywood- style events reduces citizenship to the instrumental notion of ideas of brain gain and campaign financiers. Citizenship becomes a cultural identity plus a business transaction: the ideal NRI is one who revels in the greatness of India and expects mere “high returns” for their investments in India. The NRIs are expected to be fawning audiences of a monarchy-style politics; they are expected not to speak, but merely listen and cheer (the NRIs protesting Mr. Modi’s visits abroad are seen as minor aberrations). This is in sharp contrast to the citizens at home, who often speak their mind, like in the Bihar elections, evoking writer Günter Grass’ maxim: “the job of a citizen is to keep his mouth open.”

Hence the NRIs are most sought after as they carry no political responsibilities nor do they have to bear the brunt of bad political choices within India. Freed as they are in this manner, they are now expected to provide the radical edge for a new Hindutva imagination about a placeless, apolitical, brain bank, chauvinist-nationalist.

The category of the nationalist-displaced citizen, however, is not a smooth one. Those who are especially not in the reckoning for Mr. Modi’s overseas affections are the millions of blue-collar Indian workers in the Gulf States, the 9,000 in the Democratic Republic of Congo, or the 3,500 in Sudan. All that the two million workers in the United Arab Emirates, who work in horrendous conditions, got from Mr. Modi’s visit there was the securing of land for a temple. The irony, pointed by some, that a predominant number of these workers are Muslim and Christian, is not accidental if we unpack Hindutva’s essential logic.

Nevertheless, the displaced citizen, who is expected to comprise the new ideological bloc for the Overseas Friends of BJP and the global front of the Rashtriya Swayamsevak Sangh, the Hindu Swayamsevak Sangh, is largely expected to be drawn from the privileged Indians of the U.S., the U.K., Canada, Australia and Singapore — perhaps, a new version of a nation-based caste system.

By thus trying to get NRIs to follow in the footsteps of the Zionists, the Hindutva brigade is pushing them into dangerous political and cultural territory. The NRIs are contradictory creatures marked by a deep and terrifying alienation; while many miss “home”, they actually shudder at the thought of living in India. The Hindutva forces tap into this condition. Rather than allowing immigration to become part of a million stories about the search for opportunity, embracing multiculturalism, and realising the promise of cosmopolitan citizenship, the pursuit of long-distance chauvinist nationalism will only cause further alienation and breed ghettoised experiences.