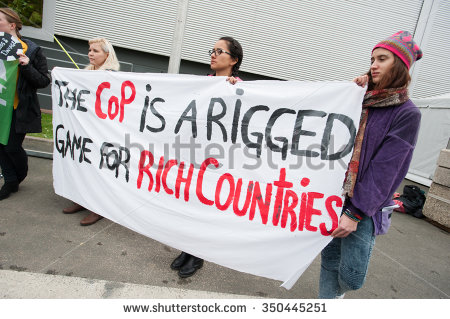 In many ways, COP21 reminds me of an arduous multiple choice exam. On multiple choice exams, I was often expected to select the “most correct” answer among a set of imperfect possibilities. The Paris Agreement, which resulted from COP21, represents the “most correct” answer to a set of tough climate questions, as far as past COP negotiations go. Furthermore, the Paris Agreement may very well be the “most correct” step that the UNFCCC has taken towards combatting climate change. However, when tackling a difficult problem, even that answer has left me feeling unsound. After tirelessly wrestling and negotiating with myself, questions continue to arise.

Many questions remain. Is the Paris Agreement too little too late? How will a legally binding agreement really materialize in terms of tangible outcomes? Are developed countries being held sufficiently accountable for the calamities that they are responsible for?

The 21st Annual Conference of Parties (COP21) came to a close on December 11 in Paris, France. COP21 unfolded under precise expectations: for all nations to unanimously adopt a legally binding agreement that would enable nations to effectively combat climate change and keep warming below the dangerous 2-degree threshold. From the outset, this year’s conference in particular, was met by the intense gaze of and acute reactions from activists, non-state actors, and community organizations.

COP21 resulted in a landmark agreement and the most recent step in the evolution of the UN climate change regime. The UN climate change regime has taken on many forms over the past couple decades; often forms that today are viewed as disastrously unsuccessful or as resounding examples of failed international cooperation. This time, the UNFCC forwarded a legally binding agreement. As a result, all parties must now regularly report on their emissions and implementation efforts, as well as undergo international review.

In order to establish binding commitments, all parties have made nationally determined contributions (NDCs), and must pursue domestic measures in order to achieve them. Additionally, each country must submit new NDCs every five years demonstrating that they are attempting to advance their nation’s measures beyond previously submitted commitments. French President Francois Hollande summarized the conference as a remarkable success. He stated that “in Paris, there have been many revolutions over the centuries. [COP21] is the most beautiful and most peaceful revolution that has just been accomplished—a revolution for climate change”.

Despite Hollande’s statement of grandeur, in typical COP fashion, much of the conference’s negotiations were painstakingly slow and its results remain ridden with weaknesses. Although the Paris Agreement is a treaty under international law, only some of its provisions are legally binding. Additionally, the agreement does not prescribe how countries should go about achieving their targets. While the agreement references the fact that developed countries must take the lead, it does not specifically mention the Annex I (developed) and non-Annex I (developing) categories of which the UNFCCC consists. Most tiresome is the fact that the submitted plans actually equate to a 3.5°C temperature increase. Global catastrophe looms as the plans fail to implement mechanisms that will prevent dangerous levels of climate change.

As a result of such shortcomings, strong impetus for change must come from non-state actors. Grassroots advocacy continues to be of utmost importance in defending the earth’s stability. Despite a palpable divide between those inside and those outside of the conference, civil society remained undeterred throughout the proceedings of the conferences. Actors united over a strong belief that catastrophe is imminent and so, we cannot sit around waiting for global consensus. As stated by Coalition Climat 21, actions “will continue to develop and multiply in the coming months and years.”

On December 12th, the day after the conference came to an end, more than 20,000 people gathered at Champs-de-Mars to “denounce the failure of COP21 to prevent the crossing of the 2°C warming threshold”. December 12th was marked by a “massive, peaceful and determined gathering” in order to declare a state of climate emergency. Organizers of the gathering include Friends of the Earth France, Action Non-Violente-COP21, ATTAC and UNEF. Events like these signal to state actors that well-intentioned rhetoric is no longer enough. Additionally, manifestations of solidarity and coalition-making that were present at COP21 signal to state-leaders that there is a strong and organized force that will continue to push for change.

The Paris Agreement is a step forward, not a step backwards. It is the “most correct” answer among a set of historically disappointing answers. However, the continued disconnect between state-leaders and other actors signals that nations are not sufficiently prepared to take bold action. Among such setbacks, non-state actors will continue to push their agenda into mainstream awareness and demand climate justice.