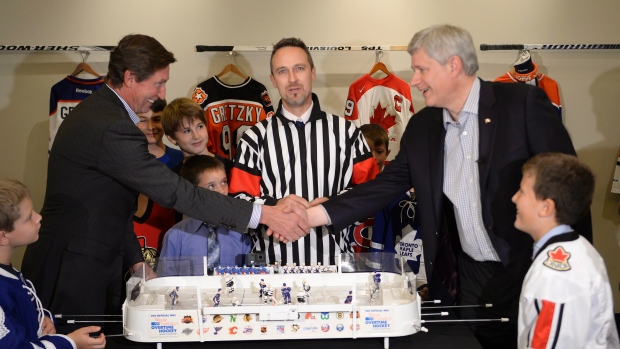 Explain to me, if you can, why we love public figures. Narrative creation, especially in the realm of public policy, seems an inauspicious way to search for new politicians or validate old ones. Here lies my confusion, mise en scene, with Wayne Gretzky and Stephen Harper as told by the CBC. “You’ve been wonderful to the whole country,” he says. “I know you have the country’s best interest at heart,” he says. Maybe it’s portentous that Harper hitched his wagon to a bygone greatness. Maybe it’s indicative of something that Gretzky couldn’t even vote in the election.

Conservatism loves its symbolism, big and small. Stephen Harper wrote a book about hockey, because he wants you to know he loves similar things. That he isn’t so embroiled in environmental policy or international finance to dismiss the good ole game of puck. In turn, the greatest hockey player to ever live shook his hand over a tabletop hockey game and said ‘not bad Steve’. This is inconsequential to someone worried about immigration reform or progressive income tax, but I guarantee my grandmother found it interesting. The simplicity of appealing to entertainment and pleasure comes alongside fear mongering, a mirrored version of the ancient authoritarianism of love and respect.

Gretzky says ‘I do’ in mid-September, but when the polling house of cards began to tumble, you could always count on mud-slinging coated in schadenfreude. Postmedia, the conglomerate running most Sun newspapers among others in the nation, ran a full front page spread detailing how “Voting Liberal will cost you” or “Voting NDP or Liberal will cost you” – in case no one informed you of the mass virtues of the Conservative party. The splashes were clearly marked as Conservative ads, yet the subconscious residue reeked of something more nefarious, Snidely Whiplash reincarnated as political ad copy. The full-page yellow followed the color scheme voters would face at polling stations. The ‘X-marks-the-spot’ in the bottom corner of most of the ads appeared like a ballot, just enough. These things don’t act in isolation. There’s always a little bit of fear mixed in with the placation, or a turn just short of outright illicit activity. Gretzky didn’t say it, but you could tell he didn’t trust the man with the hockey hair from Montreal.

Firstly, the good news is that banal evil was defeated. Just blandly, the fact that there isn’t a Conservative government is a boon for cultural diversity, immigration reform, general humanitarian efforts, and scientific knowledge. Just remember what we lost. Yes, a government complacent in its power and generous with its disregard for majority desires or even common compassion, but also a whole Leftist faction of the political sector. Fewer NDP and more Liberal seats mean more accountant and lawyers, and fewer social activists and community organizers in Parliament. The professionalization of politics is dangerous from a human perspective. Social opinions and general policies are more agreeable – less open homophobia and increased refugee quotas – but there is a modicum of control with Trudeau’s liberals that strikes a familiar tone. There is slow burn to some kinds of evil, and some kinds of failure.

Remember that entire hullabaloo about C-51? The Liberals aren’t repealing it, just updating. Worried about mandatory minimum sentences? The Liberal party might look at removing them. Think corporations should pay more taxes? The Liberals don’t. There are layers to every victory and some of us are inclined, or maybe cursed, to the dark looming in the distance just after the first storm breaks. Just note that coopted Obama imagery of capital-h Hope or the picaresque story of a puckish Justin Trudeau are not true. This is a party of dynastic power, a party of machinery, and ultimately a party of control.

Yet is it? Contradictions seem to be plentiful throughout the election period where Conservatives promised safety by preaching hate. Justin Trudeau’s recently announced cabinet is completely balanced in terms of gender. This is an unequivocal success. He is a staunch defender of female reproductive rights, and even used the F-word self referentially on Twitter with abandon. An unabashed Feminist runs the country, and he has plans, machinations. Trudeau’s desire to “launch a national inquiry into the missing and murdered indigenous women of Canada” would take steps to confirming certain Liberal promises to protect the most marginalized groups in Canada. Even if the imagery is borrowed, there is hope or at least a lack of that moribund feeling of national embarrassment.

There was a certain futility in Canadian politics for the last ten years. The static, often damning, illogic of the Conservative party stifled science, culture, and every facet of national ability. The negativity contained in losing a truly left-leaning NDP opposition is replaced with uncertainty. However unfortunate it may seem, the fortune of being uncertain instead of defeated, of looking for social growth instead of mitigating political disaster, is a new discomfort. Follow the man with the great hair, the masses cried. Lafleur over Gretzky, for now at least.