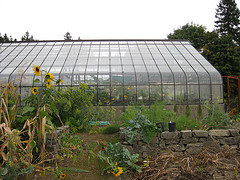 From Fossil Fuels to Ecosystem Services: Feeding a growing population

With the current global economic crisis, the associated hike in food prices, and the imminent reality of one billion people facing food insecurity, how can we ensure the provision of a long-term food supply for a global population that has now reached seven billion people?

Some experts, including the Food and Agriculture Organisation (FAO), argue that food production needs to increase by 70 per cent by 2050, whereas others argue that it is a matter of re-distribution, blaming a wasteful system where 30-50 per cent of food produced worldwide is thrown away, never consumed, or left to rot in fields. By the same process, not only food but water and energy go to waste as well.

We are facing two main challenges: We must find the means to provide a more equal and accessible supply of food to a growing world population; at the same time, we must aim to minimize waste and create solutions that do not result in damaging effects on both the climate and ecosystems.

A global UN study carried out between 2000 and 2005 has shown that the natural systems on which we all depend are now so critically stressed— through over-exploitation, invading species, and environmental pollutants—that they are losing their ability to supply benefits to our societies and secure human welfare in the form of ’ecosystem services’.

This degradation is critical, as human activity—like agriculture—relies on a number of ecosystem services such as water purification, natural pest control and maintenance of soil fertility. Part of the problem is also that traditional agriculture is heavily reliant on fossil fuels, through transport and the production of fertilisers and pesticides and therefore dependant on the energy prices, which are always fluctuating, and expected to increase.

Although organic agriculture - a practice that uses non-synthetic nutrient cycling processes, excludes or rarely use synthetic pesticides, and sustains or regenerates the soil quality, and optimizes animal and plant interactions - is no cure-all solution, it could constitute a useful approach. While opponents have often claimed that organic agriculture could not possibly produce enough food to feed the world’s population, a recent study refutes these claims.

Published by scientists from the University of Michigan and Michigan State University in 2006, the study’s estimates indicated that organic methods could provide enough food on a global per capita basis to sustain the current human population, and potentially an even larger population, without increasing the agricultural land base. In fact, the study revealed that yields in developing countries could increase dramatically, doubling or tripling in some cases by switching to organic farming.

Further studies have also proven that organic agriculture reduces the vulnerability of farmers to the negative effects of climate change and variability as it reduces input costs and increases the diversity of income sources. Production under organic agriculture systems is less prone to extreme weather conditions such as drought; this is due to the maintenance of nutrients and the increase of soil organic matter which stores more water than conventional cultivation.

An example of the benefits that can result from organic agriculture is Project Tigray in Ethiopia, initiated by the Institute for Sustainable Development (ISD) in association with the Bureau of Agriculture and Natural Resources (BoANR) of Tigray, in partnership with the Mekele University. This project began in 1995 in one of Ethiopia’s most food insecure areas. The aim was to improve productivity and food security in a fast-growing and predominantly rural population while reinvigorating the environment. The results and data collected from the Tigray Project confirmed the claim that organic farming can yield up to three times as much food on individual farms in developing countries as low-intensive methods on the same land.

The Tigray project is proof that human activity, in particular agriculture, can actually support and enhance rather than disrupt the natural cycles that allow for the healthy functioning of the ecosystem as a whole. Farmers, development agents, and ISD staff have identified a number of positive effects including increased biological diversity, improved soil fertility, decreased incidence of weeds, whereby the seeds are killed when the compost heats up during the decomposition process, decreased vulnerability to drought, higher resistance to pests, and lower costs for farmers compared with buying artificial fertilisers. The project also demonstrates that a little money can really go a long way when farmers take advantage of the free services that nature has to offer (e.g. composting, a varied crop rotation, inter-cropping of several different species of crops on one field and collection/storage of rainwater). The project is affordable, farmer-led, community-based, and builds on the local technologies and knowledge without creating relationships of dependency.

The project was particularly beneficial for women and women-headed families, who were given priority throughout the program. Effort was made to enhance the position of women in the communities by training and providing women with seeds and seedlings for plant nurseries, organizing study trips, and facilitating the purchasing of sheep, goats and cows in order to be more self-sufficient. As a result, local communities have been empowered, and have in turn developed legally-recognised bylaws to govern their land and other natural resource management activities.

The results of the project were so positive that the government has now adopted a similar approach as its main strategy for combating land degradation and poverty in Ethiopia. The successes of the project have led to its expansion to include many more communities in Tigray and in other parts of the country.

Access to and increased development of local markets, as well as local processing capabilities and export infrastructure are an important step in making organic agriculture a viable and beneficial strategy in the Global South. Wider recognition of the potential of organic agriculture is needed and further research must take into account different climatic conditions and approach each situation with cultural sensitivity.

Organic agriculture, with the aim to preserve natural nutrients and enhance biodiversity, can provide for seven billion people while maintaining and utilising the ecosystems services. More importantly, the project raised, probably for the first time, the question of paying farmers, not only for what they produce but for providing important ecosystem services such as maintaining biological diversity and absorbing greenhouse gases. The current devaluation of ecosystem services can at least partially explain present environmental problems in agriculture, as farmers have no incentives to protect ecosystems or use the services they provide in a sustainable way.

What would agriculture look like if farmers made their living not only on how much food they produce, but also based on how much their farming practice enhances nature?