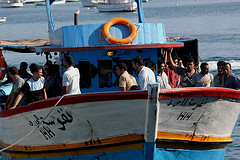 Illegal immigrants represent the world’s newest class of criminals: Locked up in detention centers that are equivalent to prisons awaiting their deportation date. And for what? Having the audacity to challenge their life circumstances.

The distinction between legal and illegal immigrant has become commonplace in both legislative and popular lexicon. This dialectic has been constructed to keep the privileged in and all others out. Far from some manifestation of justice, we do not have to dig so deep beneath the modern immigration system to arrive at its oppressive colonial roots.

Modernity redefined the movement of people in a profound way. Colonizers claimed the ultimate right to freedom of movement and the power to define and restrict the movement of the colonized. We don’t have to look further than the forced displacement of indigenous peoples onto reservations in what is now the U.S. and Canada or the slave trade that forcibly relocated Africans to the Americas to be exploited for their labor. Fast-forward to today, whether it is along the Mexico-U.S. border, or the Mediterranean sea that separates Africa from Europe, Northern countries are increasingly using their dominating power to limit and define the rules of immigration: Who, how many, for what reason, when, and where.

The European model provides a striking example of the colonial legacy in that the pattern of immigration is South to North, largely from former colony to former Metropole. The modern-day European immigration system is neo-colonial in two main ways: First, the immigration apparatus is a moneymaking industry for European corporations; and second, it allows Europe to exert its control on Southern governments to restrict “illegal” immigration at their borders.

The European Agency for the Management of Operational Cooperation at the External Borders of the Member States of the European Union—Frontex for short—was established in 2004 and became operational in 2005. Its main function is to provide a pan European model of Integrated Border Management to fortify the external borders of the Shengen zone so as to keep the zone “safe” for free movement internally.

The official Frontex website self defines its role as follows: “Within this [the Shengen zone] context, Frontex’s responsibility is essentially simple, though in practice daunting: To ensure that the EU’s external borders remain permeable and efficient for bona fide travelers, while being an effective barrier to cross-border crime.” The distinction is clear: legitimate traveler versus cross-border criminal, read: illegal immigrant.

Frontex controls 42,672 km of external sea borders and 8,826 km of land borders made up of the 25 member-country Schengen free-movement area (including a number of non-EU states). Since its implementation in 2005, Frontex’s budget has ballooned to nearly 14 times its original figure: from 6, 280, 202 EUR in 2005 to 87,917,000 EUR in 2010. Funding for Frontex essentially comes from the so-called “community,” or Schengen member countries.

According to the Frontex Annual General Report for 2010, from the operational budget of 64.9 million EUR, 46% of the available funds were allocated for sea operations. There is a note that this expenditure is inflated due to the high cost of equipment such as offshore vessels and patrolling aircrafts. The European companies contracted by Frontex—or by extension through member countries’ militaries—for the supply side of this high cost equipment must be rolling in the dough. Just as the colonial model controlled the movement and labour of the colonized for the economic gain of colonial powers, the modern-day immigration system funds a whole European industry that makes a buck on the backs of undesired migrants.

In addition to making money for European corporations, the modern-day immigration system is an avenue for Europe to extend an arm of control over its Southern neighbors. What we see is a situation where Maghrebian governments are complicit with EU immigration policy and act as gatekeepers in the service of Europe to restrict migration at the source: their own borders. Bi-lateral agreements as well as readmission agreements between European nations and countries of origin for many migrants to Europe are legislative examples of this control.

For instance, the Treaty on Friendship, Partnership, and Cooperation between Italy and Libya is a bi-lateral agreement signed in 2008. The most significant part of the treaty for our purposes is the immigration chapter. In it is stipulated that Italy will provide Libya with boats to patrol approximately 2000 km of the Libyan coast. Under the agreement Libyan land borders are to be controlled by a satellite detection system financed jointly by Italy and the EU.[1] Under this scheme, not only does the EU patrol its own borders, but extends its power of border control to its Southern neighbors, (not) coincidentally many countries formerly colonized by EU member states. These actions call into question the EU’s respect for the UN Convention on the Law of the sea, granting a country control of waters within 24 nautical miles of their own land borders.

Readmission agreements, too, force government complicity with EU immigration policy. Under these agreements, signatory states commit themselves to readmit nationals and those who transited on their soil before being apprehended in an irregular situation on the soil of another State. The European Council in its “Proposal for a comprehensive plan to combat illegal immigration and trafficking of human beings” in February 2002 sated: “…before the negotiation of any readmission agreement, the interests of the European Union and of the Member states should be taken into account.”[2] Thus, readmission agreements prioritize European interests over compliance with the rules of international law and consideration for human rights and should provoke serious concern for the well being of refugees and asylum seekers.

As one example, the bilateral agreement between Italy and Tunisia dates back to 1998, and stipulates cooperation for information sharing aimed at a speedier deportation process. The agreement also included Italian funding for the building of detention centers in Tunisia and an Italian commitment to training the Tunisian police force.

The Libyan and Tunisian examples point to a phenomenon that Claire Rodier, coordinator of the Euro-African network, Migreurop, refers to as “delocalization” of control. This strategy, too, was born out of a certain brand of colonialism—for instance, that of French colonization in Algeria. With relatively few French settlers present in Algeria, the colonizing strategy relied in large part on the assimilation of Algerians to propagate French domination. Such is the current immigration strategy of Europe unto its Southern neighbors.

Sail up, Fight back: Boats4People

In the wake of the Arab spring, the death toll is rising: According to Fortress Europe, a blog maintained by Italian journalist Gabriele del Grande, 1,931 immigrants have lost their lives in the Mediterranean Sea in the first 7 months of 2011. Of these, 1,674 of have died in the Strait of Sicily, attempting to reach European shores, most notably the Italian island of Lampedusa. For its part, the UNHCR estimates that more than 2,000 people are missing at sea since February 2011.

While appalling numbers of migrants are dying at sea, Italy’s southern island of Lampedusa—the primary entry point for African migrants to Europe—is overcapacity in its Centers for Identification and Expulsion (CIEs). Through joint operation Hermes, Frontex has increased deployment of its agents to the central Mediterranean region, at Italy’s request.

The European Union’s reaction is criminal: Rushing to aid Italy, which is drowning in immigrants, rather than mobilizing to save migrants who are drowning at sea. The European coastguard, Frontex agents, and the military coalition engaged in operations in Libya under NATO command are all at fault for turning a blind eye to boats in peril.

In May 2011, the Guardian reported that a boat carrying 72 passengers trying to reach Lampedusa was left adrift for 16 days in the Mediterranean Sea, despite contact being made with the Italian coastguard, a military helicopter, and a warship. All but 11 of those on board died of thirst and hunger due to the inaction of European and NATO authorities.

This is a blatant violation of international maritime law, which compels all vessels, including military units to assist those in distress at sea.

In reaction to the dire situation in the Mediterranean, migrants’ rights activists from all over Europe have come together to propose a direct action project in solidarity with migrants. The Boats4People project aims to organize a flotilla that will leave from Rome in the Spring of 2012, and will travel towards the south of Tunisia via Sicily, Malta, Lampedusa, Tunis, Sfax and Ben Guardane. According to the Migreurop website, the project’s goal is to denounce the tragic and unnecessary deaths that are taking place in the Mediterranean. Organizers wish to exercise their right to access the maritime regions in which these shipwrecks are taking place as well as the Italian detention centers where migrants are being detained.

By inviting journalists, activists, artists, and politicians to take part, the main aim of the project is to raise awareness of the tragic situation and pressure governments to act.

Boats4People directly accuses state actors (border guards, Frontex, NATO) for failing to assist migrants, as they are compelled to do by the UN convention on the Law of the Sea and the Geneva Convention. The project is part of a movement that envisions a Europe that is in solidarity with migrants, rather than one that criminalizes and excludes them.

A Case for Migrants: Status for All

In a 2006 speech, EU commissioner Ferrero-Waldner described Europe’s position on migration: “People planning to emigrate need to be encouraged to come legally… We are also tackling illegal immigration head-on by assisting our neighbours to improve their migration management.”[3]

What is perhaps not evident in this diplomatic speech is that Europe’s gracious “neighborhood” policy, while seemingly encouraging of immigration, in fact serves as a tactic to limit and define migration by European standards of desirability. By legislating an extremely selective and inaccessible immigration process, European countries have crafted a legal framework to justify the inhumane exclusion of a majority of migrants.

People immigrate or migrate by force or by choice, and the distinction between the two is not so clear. Unlivable and violent situations of war, lack of economic opportunity, hopes for a better life, reuniting with family, or adventure (a motivation typically reserved for citizens of developed countries). People are often so desperate to migrate that they are willing to risk their lives and fall into debt to embark on a journey for which the outcome is far less than certain. The reasons for which many migrants are forced to leave their homes today (e.g., poverty) stem from histories of colonization and legacies of the neoliberal development model.

A ‘status for all’ perspective calls for the freedom of circulation—for the recognition and respect of a person’s human right to travel. An immigration system that privileges certain humans over others based on where they are born is a racist one that perpetuates the injustices of colonization rather than challenging them.

This dichotomy must be challenged, both on a theoretical level and through direct action. Denouncing the current state of injustice is necessary, but we need to simultaneously direct our energies to imagining and organizing creative alternatives to the normalized violence of the status quo.