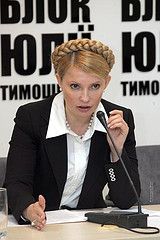 Selective Justice in the Tymoshenko Trial

The news of Tymoshenko’s criminal trial and subsequent sentence made a considerable impression on an international scale; Ukraine now faces significant pressure from the European Union (EU) and several other international organisations, politicians, and diplomats to release the former prime minister.

Yulia Tymoshenko rose to global prominence during the 2004 Orange Revolution, rallying against the corruption present in post-Soviet Ukraine. Following the overthrow of Viktor Yanukovych, Tymoshenko was appointed the first female Prime Minister of Ukraine and was later re-elected. Prior to her political career, Tymoshenko led a decidedly successful career in the gas industry.

Since her unsuccessful bid for president in 2010, 12 criminal cases have been opened against Tymoshenko and several Ukrainian officials affiliated with her under the government of former Prime Minister and current President, Viktor Yanukovych. Of these 12 cases, the courts most actively pursued the claims against Tymoshenko’s ‘abuse of office’. Old proceedings against Unified Energy Systems of Ukraine were reopened in an effort to exclude Tymoshenko and her former government from Ukraine’s political front. Accused of exceeding her authority as prime minister by signing a 2009 gas deal with Russia, Tymoshenko’s trial began on June 24, 2011.

In his ruling, Judge Rodion Kireyev sentenced the opposition leader to seven years in jail, a ban from political participation during her period of imprisonment, and a fine of approximately $188 million, lost by the state gas company as a result of the Ukraine-Russia gas deal.

The details of the case remain questionable at best. Article 365 of the Ukrainian criminal code, under which Tymoshenko was prosecuted, dates back to the Stalinist period of the 1930s. Whereas such cases are handled as political cases throughout the EU, the Kiev court handled Tymoshenko’s trial as a criminal case. Moreover, prosecutor Lilya Frolova admitted that several documents in the investigation were dated April 31, a non-existent date.

Unable to participate in the coming 2012 parliamentary and 2015 presidential elections, Tymoshenko remains defiantly positive. “I will continue my fight for Ukraine, for its European future," she told reporters shortly before her sentencing on October 11, 2011.

Yet, a European future for Ukraine appears implausible given President Yanukovych’s recent anti-democratic proceedings against Tymoshenko. " The president considers me to be his most dangerous political rival," said Tymoshenko in court. “This trial is a classic case of political lynching.” Western politicians and diplomats have since agreed; the EU criticised Tymoshenko’s charges as "selective prosecution of political opponents," and Amnesty International dubbed the Tymoshenko trial "politically motivated".

EU High Representative for Foreign Affairs Catherine Ashton remains reasonably apprehensive towards Ukraine’s EU integration, in light of the Tymoshenko trial. "This [verdict] unfortunately confirms that justice is being applied selectively in politically motivated prosecutions of the leaders of the opposition and members of the former government,” Ashton said in a statement issued October 11, the day of the verdict. Such an approach to legal justice "risks having profound implications for the EU-Ukraine bilateral relationship,” she added.

Upon entering the presidential office in 2010, Viktor Yanukovych announced the importance of EU integration. However, under President Yanukovych’s semi-democratic leadership, full European integration is neither plausible nor warranted. Significant effort must be made to protect and advance democratic values and the rule of law for all Ukrainian citizens, a feat unimaginable under the Yanukovych presidency.

The politically motivated nature of Tymoshenko’s trial warrants significant international scrutiny and recrimination. The charges brought against Tymoshenko imply neither corruption nor misuse of funds on her part, but rather, they seek to sideline the former prime minister before the upcoming Ukrainian parliamentary and presidential elections.

The crux of the situation rests within the selective application of justice against one’s political opponents — a charge for which Yanukovych must be held responsible.

The blatant disregard for democratic values and standards exhibited by Yanukovych and his government must carry serious consequences. This attitude conflicts both with Ukraine’s future relations with the West, and with Ukraine’s long-term democratic development. Rather than take an impartial stance on the matter, the EU and the international community at large must remain committed to addressing the democratic backsliding present in Yanukovych’s Ukraine.