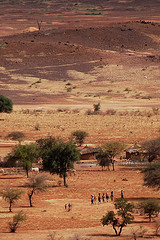 Food Crisis in the Sahel: A Livelihood Crisis?

The Sahel, a region that has been described as being ’in a state of permanent crisis’, has been brought into the spotlight by the Sahel Working Group, composed of ten international development NGOs working in Burkina Faso, Mali, and Niger.

In September, the group published a report ’Escaping the Hunger Cycle Pathways to Resilience in the Sahel,’ that examines possible solutions to tackle the root causes of food insecurity in the region.

The report has been issued following a warning by the United Nations this September of the possibility of another ’full scale food crisis’, which could put over 1 million people at risk due to recent episodes of drought and insect infestation.

The 2011 Global Hunger Index showed worldwide hunger levels on the rise, with 26 countries at ’alarming’ or ’extremely alarming’ hunger levels. The question remains how can we put an end to the cycle of hunger?

Responses are often limited to costly, unsustainable interventions, mainly emergency relief and food aid. According to the former UN humanitarian coordinator Jan Egeland, if actions had followed early warnings, $1 a day per child would have been enough to prevent acute malnutrition among children in 2004.

By 2005, the cost of saving a malnourished child’s life in an emergency response operation was $80.10 per child per day. The high food prices, drought and locusts are only triggers to a deeper rooted problem of chronic vulnerability in the Sahel.

Following the 2005 food crisis, researchers and aid agencies have realised that the chronic dimension of hunger cannot be solved solely by making more food available; instead, the structural causes of chronic vulnerability must be taken into consideration.

The Sahel is prone to droughts and erratic rainfall, conditions which explain why its inhabitants have had to adapt and find coping strategies to survive in an unpredictable environment. Previous droughts have occurred in the mid 1970s, 1980s, 2005 and 2010. This makes the Sahel a vulnerable geographical zone with limited natural resources and irregular rainfalls.

Structural causes to vulnerability also increase the number of vulnerable groups, which are often marginalized, and trapped in a vicious cycle of endangered livelihoods. Such pastoralists, small scale farmers, matrifocal households with limited access to land or livestock, children and pregnant women are unable to migrate to find income generating activities elsewhere.

For a majority of people who rely on markets to buy cereal and other essentials, spending more than 60% of their revenues, the rising food prices represent an increased state of vulnerability, as they will often need to rely on credit or sell thier limited assets.

During the 2010 crisis, many people in Niger and Chad were forced to sell their livestock and other possessions at derisory prices to afford grain at inflated prices. While pastoralists were affected by the lowered price of livestock on a saturated market, the cost of labour went down as a consquence of the early migration of women and children to urban areas in search for work. A downward spiral of debts resulted, with many households increasingly vulnerable.

The report by the Sahel Working Group demonstrates that there ’is a growing inequality in the distribution of productive assets’ such as land and animals. Wealthier households which represent around 25% of the population, control 50% of the cultivated land, and more than 75% of the cattle. This enables them to generate 9 to 15 times the amount of revenue earned by poorer households.

The focus must shift, from ‘food availability’ to ’purchasing power’. There is a need for targeted social protection programs that would establish a regulatory framework to control market prices, which has proven to be successful elsewhere in Africa.

But engaging the World Bank and the World Trade Organisation, which are intrinsically opposed to any market distortions, remains problematic. Poverty reduction strategies in the Sahel have been relying largely on market liberalisation to stimulate economic growth, but this has not resulted in an equally distributed increase of wealth.

This year, the situation in Libya has also put additional pressure on many households of neighbouring Niger, as many have been forced to leave their jobs, migrating back following Qaddafi’s downfall.

Over 150,000 Nigerians are said to have fled the fighting resulting in an economic catastrophe. They have been banned from returning to their otherwise well paid jobs on the other side of the border. While a majority of Nigerians who fled were earning decent salaries in Libya, the majority in the construction or agricultural sector, or informal economy, now face bleak job prospects back home, in a country where 60 per cent live in extreme poverty and are faced with a lack of assistance from the government.

To ensure that the root causes of chronic food crisis are tackled, strengthened institutional capacity of governments and their partners, such as the UN, are required to contain extraordinary situations like these and in countries like Niger, where foreign aid makes up nearly half the budget. Good governance and the ability to efficiently use funds is even more important. Cash transfers, which remain under-utilized according to the latest report, represent a sensible response as it not only gives people access to food and other essential goods and services, but also supports local producers.

The population in the Sahel is mostly rural, in Burkina Faso and Niger. For example, 80-90 per cent live in the rural areas. The main source of livelihood in the North is pastoralism, while the South is dominated by small scale farming.

Investment in agriculture is key, as it plays a vital role in the Sahel’s economies. It would be advantageous to boost rural livelihoods in marginal or degraded agricultural areas through sustainable intensification of food production, using Agro-ecological techniques, and in pastoral areas through support for animal health, production and marketing.

Agro-ecological techniques include integration of livestock, soil and water conservation. These have the potential to strengthen resilience, increase income, and improve food security but only in a limited way, for the poorest households.

Basic principles include ’integration of recycled nutrients and energy on the farm, rather than introducing external inputs, integrating crops and livestock, diversifying species and genetic resources in Agro-ecosystems over time and space, and focusing on interactions and productivity across the agricultural system, rather than focusing on individual species.’

Knowledge is developed through individual cases, through experimentation and learning and is not based on techniques that are learned in a top-down way.

The authors of the report argue that Agro-ecology techniques should be coupled with complementary strategies that aim at improving incomes, reducing risk, and protecting livelihoods. But not all effort should be focused on increasing food production, because even if Agro-ecology helps households increase their food production, they would still need to purchase around 40 per cent of their food from the market in most cases .

The report recommends making child malnutrition and child mortality a central focus, and to use the values as a benchmark to better measure the intensity of the crisis. In Chad, 1/3 of the population faces chronic hunger, and more than half the population in Niger suffer from chronic food insecurity, with almost a quarter extremely food insecure.

The intervention in 2005 and 2010 saved lives, but did not address the underlying causes of child malnutrition. The levels of acute malnutrition have remained above the emergency threshold level even in good years, with half the children under 5 affected by chronic malnutrition.

The annual deaths of thousands of children has been normalised. While politics and the economy influence our everyday lives, climate change, food insecurity and other catastrophic events remind us that we, as a population, are strongly dependent on our environment.

In the West Africa dry lands, the population—mostly rural—is highly dependant on their local environment and is therefore highly vulnerable. Building upon a vast range of skills, indigenous knowledge and resources have adapted well over time. Economic and political measures should be taken to ensure that people can maintain their livelihoods, while supporting them to cope better with risk, vulnerability and disasters.