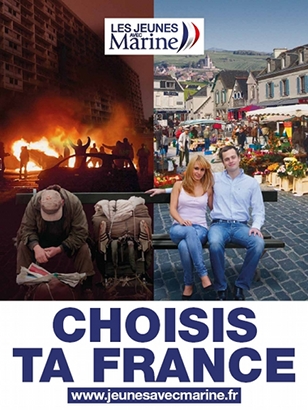 With the Presidential elections in France quickly approaching, Les Jeunes Avec Marine, the youth faction of the Front National (FN) launched its first national campaign poster, « Choose Your France » (Choisis Ta France) on November 9. Split down the middle and juxtaposing two strikingly different scenes, the poster demands in large, capital letters sprawling across the bottom of the tract : Choose Your France.

The viewer’s attention is drawn immediately to the background, where a blazing turmoil in front of an apartment building presumably references the riots outside of Paris in the early 1990s, and undeniably evokes the image of marginalized immigrant communities living in high-rises all over the country. Underneath sits someone looking desperately resigned, head hung low beside a tattered backpack strapped with old sneakers, blankets and newspapers.

In contrast, on the other side is a young, vibrant couple who sit facing the viewer with confident postures and crisp clothing, foregrounding a charming rural village, a colorful market and a clear blue sky.

Aside from the shocking set of assumptions, prejudices, and associations the poster mobilizes, what is perhaps most unsettling about the campaign is the highly reductionist dichotomy it endorses. The France of the left is dark, violent, desperate, insecure and utterly incompatible with the France of the right – light, stable, satisfied, and safe.

The two images share only the bench on which all three individuals sit. A young FN activist explaining the importance of the upcoming elections in a video on the organization’s website comments on the poster, “The France on the left-hand side is coming, an insecure France, a France on the edge of poverty...where French people find themselves alone in society. This is the France that the PS (Socialist Party) and the UMP (Union for a Popular Movement) are creating with the numerous austerity measures currently being put in place.

The France on the right is the France that we and only we can guarantee for tomorrow. The France that we love and that all French people love.”# The description is rife with simplistic dualisms, rising rhetoric, and dangerous amalgamations, “Whoever says poverty says insecurity. Insecurity always comes with poverty.” The poster leaves little room for interpretation – whoever says poverty also says immigration, for which there is no room in this France “that all French people love.”

The increasing participation of young people in populist groups is the object of a recent study published on November 7, 2011 by the British research group Demos. The study coins these groups “populist parties and groups,” due to the difficulty of categorizing them along traditional party lines.

Despite being often labeled extreme-right, parties like the FN have a potpourri of traditionally left wing and right wing political beliefs. Calls to restrict immigration and oppose gay marriage are made alongside declarations to leave the Eurozone and re-industrialize the French state. The FN is highly critical of global capitalism and its affect on workers, consequently supporting a welfare state and workers rights, values traditionally associated with the left. Along with other populist parties across Europe, the FN expresses a deep sense of duty to protect national identity, seen as fundamentally threatened by growing immigration, particularly from Muslim countries.

The publication examined the rise of online participation in populist parties across Europe through Facebook, by advertising links to a survey on the pages of populist party Facebook fans. It shows that online supporters tend to be young men, are slightly more likely to be unemployed, have low levels of trust in political institutions and are importantly, not just armchair activists, but active voters. Despite the fact that many are not official party members, 67% reported having voted in the last elections.

Interestingly, younger supporters were more likely than older supporters to list immigration as a motivation for joining, contrary to the belief that immigration is more often opposed by older people. Amongst all the countries surveyed, concerns about immigration in France were highest. The paper looks at the Front National and the Bloc Identitaire, a smaller street movement founded in 2003 that assembles regional identity movements in the name of protecting regional, national and European identity. The group favors protests and direct action. They are known for having created a variety of pork soup to be served at a Parisian soup kitchen, aimed primarily at excluding Muslims.

The Front National was established in 1972 by Jean-Marie Le Pen. According to Gerard Noiriel, a premier French historian who studies the history of immigration in France, the early success of the Front National can be attributed to its ability to adapt to social and political circumstances and in particular its recognition of the importance of mass media and discourse. As the Front National emerged, a changing political environment saw the replacement of popular organizations previously based on social criteria by organizations based on ethnic origin. Jean-Marie Le Pen understood that the explicitly racist and fascist discourses of the 1930s were no longer appropriate (nor legal) and he thus refashioned a sort of ethnic discourse around the idea of the Republic and the importance of protecting so-called republican values.

As Noiriel notes, the power of the Front National is that it changed the terms of French political debates. By re-articulating fundamentally racist beliefs in a politically flexible language and skillfully gaining the attention of mass media through sensationalized campaigning, both left and center parties were forced to engage with the issues and terms raised by the party. The creation of the Immigration, Integration and National Identity Minister, the series of public debates on national identity in 2009, President Sarcozy’s declaration that he intended to re-establish French borders within the Schengen zone all clearly show that this rhetoric has been integrated into public debate and policy choices.

The position of the FN with regards to national identity is particularly unsettling, as it suggests that Islam is incompatible with the values of the Republic. Islam is seen as a communitarian religion encouraging ethnic and religious ghettoisation, which prevent individuals from properly assimilating into the Republic. The fallacy of this framework, the unjustifiable conflations it proposes and the violent interpretation of assimilation it proposes are not recognized in the public debate.

The Republic is considered diverse but not multicultural, and different cultures must cede their identity to a narrow set of values that ignore their own foundational cultural biases. Glaring questions interrogating the origin of social marginalization, immigration and poverty are overlooked and replaced by reductionist discourses that recast social problems as cultural differences.

The Jeunes Avec Marine website—clean, organized, thorough and highly professional—outlines the FN Youth’s position on various topics: the economy (leaving the Euro: it’s possible and urgent), national education (restoring the republican school), immigration (a weapon of world finance seeking to divide the working class), nation (we must fight for France as our ancestors did), globalization (only strict national borders can protect cultural traditions), and opposition to gay marriage (a challenge to French tradition, thus a threat to the values of the Republic, which must never cede to so-called communitarianism). The site reflects impression coordination and an active engagement of youth on regional and departmental levels.

The success of Jean-Marie Le Pen in the first round of the 2002 presidental elections was a shocking attestation of the support the FN had managed to attain. The most recent Ipsos opinion poll (a consulting group for France’s major media outlets) shows that Marine Le Pen, the current FN candidate (and the daughter of Jean-Marie) holds 19% of the vote, with Sarkozy at 24% and Hollande at 35%. The rising participation of young people in populist movements like the Front National and others across Europe reveals that exclusive and oftentimes racist nationalist sentiments remain persuasive and resounding discursive strategies. There is an obvious sense of economic and social insecurity that is being crudely manipulated by fear tactics and ethnic conceptions of national identity. The Demos study shows that growing numbers of young, populist supporters are active political participants, and thus, may be essential elements in deciding the upcoming presidential elections.