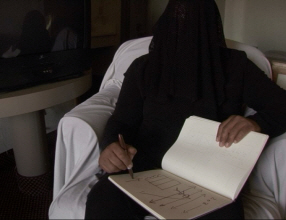 A man, identity concealed behind a black veil, opens a blank journal and begins his life’s story; in front of him, a camera records. The journal serves as a physical record of his story, a focus point for the viewer who is not privy to the identity of the speaker. The speaker is a sicario, or hit man, who has worked both for the cartels and the Mexican state police. Having found religion, he is compelled to tell his story.

El Sicario, Room 164[1] is a documentary film that illustrates a Mexico where—if you know the right people—borders are illusionary, and the war on drugs a charade.

With disturbing clarity and detail, the Sicario describes the brutal acts of torture he committed while working for the cartels, sometimes enacting theatrical renditions of conversations and torture methods he used on his victims. In a matter-of-fact tone, he lays out the systematic intersections between those who work for the cartels and those who occupy various positions of state authority: From municipal and state police to politicians and military officials, according to the Sicario, many are implicated in narco-trafficking in one way or another. His experience has taught him that the cartels work together with the police on certain operations and for others, the police pull out of an area for long enough to let the Organization do its work. Of 200 people to graduate from the police academy, 50, he says, work for the Organization.

The Sicario’s account points to corruption on all levels of government that blurs the lines between cartel agents and state authorities. A recent report by Human Rights Watch illuminates a version of Mexico quite in line with that described by the Sicario: Mexican military and police officials are responsible for tortures, disappearances, and extrajudicial killings and continue to live and work with complete impunity. As a close Mexican ally, the picture the U.S. presents of Mexico is, on the contrary, one of a legitimate government that is worthy of receiving billions in funding from its Northern neighbor. Despite proof of misconduct, the US continues fueling a war led by a corrupt government and the consequence is an ever-rising civilian death toll.

An Affront to Human Rights

A recent Human Rights Watch report entitled Neither Rights Nor Security: Killings, Torture and Disappearances in Mexico’s ‘War on Drugs’ presents an account of Mexico similar to the one described by the Sicario. This version of Mexico points to a systemic problem—one where state-condoned violence targets civilians and state actors abuse and kill in a culture of impunity.[2]

Immediately after taking office in December 2006, Mexican President Felipé Calderón launched a war on organized rime, deploying Mexico’s military to combat drug cartels. With more than 50,000 soldiers involved, the official government-reported death toll by the end of 2010 was 35,000. While the Mexican government has not issued new figures, other sources put the figure at thousands more.

Through research across five Mexican states—Baja, California; Chihuahua; Guerrero; Nuevo León and Tabasco—Human Rights Watch found evidence that strongly implicates security forces in more than 170 cases of torture, 39 “disappearances,” and 24 extrajudicial killings since 2006. Soldiers who commit human rights violations continue to be tried in military courts, despite rulings by Mexico’s Supreme Court and the Inter-American Court of Human Rights that such investigations should be handled under civilian jurisdiction for reasons of conflict of interest. Between 2007 and 2011, there have 1,615 internal military investigations of crimes allegedly committed by soldiers against civilians. Of these, not a single soldier has been convicted. Thus, the Mexican military operates in a state of complete impunity.

Americas director at Human Rights Watch José Miguel Vivanco has commented on the failure of this war on drugs: “Instead of reducing violence, Mexico’s ‘war on drugs’ has resulted in a dramatic increase in killings, torture, and other appalling abuses by security forces, which only make the climate of lawlessness and fear worse in many parts of the country.”[3]

Mexican activists have launched a petition—now surpassing 18,000 signatures—requesting that the International Criminal Court (ICC) investigate President Felipé Calderon for the torture and killing of civilians in the war on drugs.

US Continues Funding Despite Abuse

Directly behind Calderon’s war on drugs is President Obama, throwing billions at Mexico through the Merida Initiative. According to the US Department of State, “the Merida Initiative is an unprecedented partnership between the United States and Mexico to fight organized crime and associated violence while furthering respect for human rights and the rule of law.”[4]

Since its launch in 2008, the US Congress has appropriated $1.6 billion for the so-called partnership with Mexico. Under the initiative, the funds go towards drug interdiction equipment and training, read: military and police force enhancement. According to Just the Facts, US investment in military and police aid to Mexico jumped over threefold in just five years, from approximately $56 million in 2007 to about $186 million in 2011.[5]

As a gesture of oversight, the US Congress had placed 15% of select funds under four human rights stipulations from 2008-2010. These included: Transparency and accountability in law enforcement, trial in civilian courts for military officials accused of human rights violations, consultation with human rights organizations, and prohibiting testimony obtained through torture. In a controversial move, in 2009, the US State Department released a report signing off on Mexico’s compliance with the conditions and released the funds.

The 2010 Department of State Country Report on Human Rights Practices for Mexico reads: “The federal government [Mexico] or its state agents did not commit any politically motivated killings; however, security forces, acting both within and outside the line of duty, killed several persons, including minors, during the year.”[6] For the Mexican and US governments, the drug war involves two distinct and opposing actors: On the one hand, the Mexican government with its functional military and police apparatus and on the other hand, the drug cartels. Thus, the aim is to separate a “legitimate” Mexican state from those state actors who commit human rights violations—the classic “few bad apples” defense.

Often referred to as Plan Mexico, the Merida Initiative takes the same hard-line approach as Plan Colombia. Since 1999, the US has invested $7 billion in military aid and fumigation of cocoa plantations in Colombia. More than a decade later, the War on Drugs appears to be a failed model. Plan Colombia has not eradicated cocoa cultivation; it has only led to increased paramilitary presence and forced displacement of civilians. Militarization has not offered a solution to drug trafficking. Instead, it has only displaced the route of drug trafficking, thereby creating new “problem” countries. The focus has shifted from Colombia to Mexico, and is now expanding from Mexico to Central America.

On November 4, 2011, in what would be his final post on Twitter, Mexican Minister of the Interior Francisco Blake Mora, commemorated his predecessor who was killed in a plane crash three years prior: "Today we remember Juan Camilo Mourino three years after his passing, a human being who worked towards the realization of a better Mexico.”

In what has been described by news sources such as the Los Angeles Times as an “odd coincidence,”[7] a week later, on November 11, Blake Mora met the same fate as Camilo Mourino when his helicopter crashed outside of Mexico City in foggy weather conditions.

In turn, both Camilo Mourino and Blake Mora acted as President Felipé Calderón’s right hand man in Mexico’s war on drugs. While the details of both events remain vague, the crashes are thus far reported to have been accidental.

Indeed, a big and odd coincidence.

In such a Mexican reality, as described respectively by the Sicario and the Human Rights Watch report, is it possible that two successive Ministers of the Interior—the figureheads of Calderón’s war on drugs—were killed in successive, accidental plane crashes? The fog that is the suspected cause of Blake Mora’s helicopter crash certainly lies thick over the unsettling details of this ongoing war on drugs.