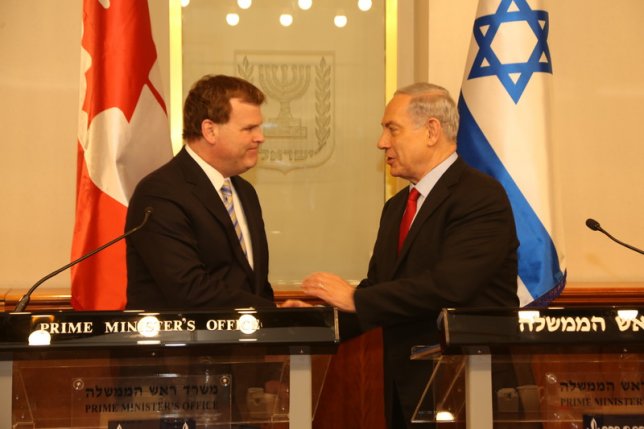 At its July convention the Green Party of Canada’s GPC) membership adopted a resolution (1) calling for an end to Israel’s settlement building program in the occupied Palestinian territories (OPT). That program has been underway for more than four decades. Those settlements are ethnically exclusive, contravene international law (2) and render impossible the two-state peace process that Canada officially (3) endorses. Building those settlements relies on tactics of extreme violence, intimidation and economic strangulation, which has inflicted misery on all aspects of Palestinian daily life. This is done with the over-riding aim of pushing ethnic Palestinians out of (4) their homes into tiny “reserved” enclaves, or out of the OPT altogether, in order to make way for ethnic Israelis. As a process of replacement it is reminiscent of the way Aboriginals were treated in Canada, a historical shame that the Green membership (5) officially regrets. In general, it is fair to say that Canadians do not consider such behaviour to be either democratic or acceptable today.

Yet, rather than challenge regressive Israeli policies, the Canadian government and leading politicians put significant time and effort (6) into reinforcing them. They do this even though Israel’s settlement building and racial exclusivity lie at the heart of all conflict between Israelis and Palestinians, adding fuel to the fire of the broader destabilisation of the Middle East – and the world. Fundamentally, those politicians, be they Liberal, Conservative or NDP, choose to accept Israel’s narrative of the conflict and occupation, while rejecting outright the Palestinian voice.

Having chosen sides, they operate under a simplistic belief that Israelis are inherently “good” (7) and Palestinians/Arabs/Muslims “bad”, and do their best to prevent the Canadian public at-large from understanding the nuances of the Israeli-Palestinian relationship in the OPT. Those politicians also quickly punish (8) the Palestinians whenever they take actions that challenge Israeli rule or call for equal rights. With the same logic, such politicians also regularly ostracise and punish Canadians who advocate for Palestinian rights, often labelling those rights advocates in Orwellian terms as racists and extremists, too.

It is in this way that we can best understand how, with great determination, the GPC leadership under Elizabeth May is fighting her own membership’s resolution for a limited (9) boycott, divestment and sanctions policy meant to put pressure on Israel to stop its settlement building program.

There are many documented and more undocumented cases of the oppression of Canadians by Canadian politicians and their government for trying to provide assistance to Palestinians. For instance, in 2009 the government cut long-running federal funding for the Church coalition KAIROS over its Palestinian rights advocacy. Then Minister of Citizenship and Immigration Minister, Jason Kenney, told an Israeli audience that the organization was cut off because (10) the government did not like its views on Israel, and because it took a “zero tolerance approach to anti-Semitism”. KAIROS supports all human rights and is in no way anti-Semitic. Kenney said this based on allegations (11) made against KAIROS by three very right-wing, pro-Israel organizations: B’nai Brith, the Canadian Christian College and NGO Monitor.

Another organization with a long-standing record of federal government grants, Alternatives, saw its funding cut in December 2009. This came in spite of positive evaluations (12) by independent auditors of their work. Alternatives claimed they were denied funding for criticising Israel, costing them a $2.1 million grant they expected (13) to receive for 2009-10.

Further, in the immediate wake of Israel’s war with and massive bombardment of Gaza in the winter of 2008/9, the Canadian Arab Federation (CAF) made public statements (14) critical of Israel, the Canadian government and certain public figures. Shortly thereafter, Kenney instructed Citizenship and Immigration Canada to cancel millions of dollars in funding CAF used for programmes for incoming immigrants, undermining (15) CAF’s operational budget.

In Israel, a Haifa-based research organization, Mada al-Carmel, received three grants from a Canadian government funded Crown corporation called the International Development Research Centre (IDRC). Those grants were earmarked for research to be carried out on the marginalisation of women in Arab-Israeli society and on the low levels of political participation by Arabs with Israeli citizenship. Though funded by the Canadian government, IDRC is in theory supposed to be able to operate at arm’s-length from it. In March 2009, in the second year of funding, IDRC cancelled grants (16) worth $800,000 without good cause, equivalent to 40% of the Mada al-Carmel’s budget.

Serious allegations surfaced about interference by the Israeli and Canadian governments. Then IDRC President David Malone himself acknowledged that concerns about funding Mada al-Carmel were first brought to his attention by the Israeli organization NGO monitor (17), which is closely connected to the Israeli government and focuses on fighting Palestinian human rights work carried out by non-governmental organizations (NGOs). Mada al-Carmel did fight the spurious cancelation with an April 2010 lawsuit, and an out of court settlement (18) followed quickly in its favour in September 2010.

At around the same time a Canadian human rights organization called Rights and Democracy was plunged into turmoil over three small grants of $10,000 it made to internationally renowned human rights groups B’Tselem, Al Haq and Al Mezan in Israel and the OPT. Like IDRC, Rights and Democracy was supposed to operate at arm’s-length from government, while the Canadian government provided (19) its funding and named its Board of Directors. The three grants led the Harper Conservative government to appoint Board members with extreme right, pro-Israel views. The Chairman of that group had a close relationship with NGO Monitor and again it seemed to play a role in sparking the problems. A vicious battle eventually played out (20) between those Directors and the staff, which included unfounded accusations made by Board members that the President of the organization supported terrorism, underhanded techniques aimed at tarnishing his professional record, his eventual death from heart failure while suffering serious stress from bullying, a curious break-in (21) and theft of records during his funeral, a financial audit employed as a weapon against the staff activities and ultimately the government shutting down the organization in 2012.

While conducting research on Canadian funded development aid projects in the OPT from 2001 to 2012, I was given further insight into the scope of government oppression of Palestinian rights work in Canada. Out of 16 in-depth interviews I conducted with project coordinators from 10 different Canadian organizations, an astonishing 15 coordinators from 9 of the organizations spoke of their work being undermined by the Canadian government, typically based on spurious charges and done using dubious methods.

In general, the Canadian government would fund aid projects that did not challenge Israeli policy, like maternal milk and hopeless export (22) development assistance, or more often projects that actually reinforced Israel’s occupation, such as training Palestinian security (23) services to maintain order under Israeli rule. Projects that in any way hinted seriously at empowering Palestinians, and especially those that advocated Palestinian rights, where attacked. This was most pronounced during the Conservative Harper government (2006-15), but not reserved to it alone, as there were challenges during the preceding Chrétien and Martin Liberal governments (1993-2006). From the research I conducted, I was able to discern a pattern of four tactics the government used when attacking these aid organizations:

1. Manipulating funding for a specific aid project or an entire organization. This could include threatening an organization with a loss of funding, or offering them funding if they abandoned their Palestinian work. Often just the fear of publically seeing another organization punished (like Rights and Democracy or KAIROS) was enough to scare organizations into debilitating self-censorship.

2. When possible, placing ardent pro-Israel advocates into key positions of power at an organization, such as the Board of Directors, where they could sabotage its work and bring its activities to a halt from within. Those advocates tended to represent the extreme right of the political spectrum, and often could be described as holding racist views towards Arabs, Muslims and/or Palestinians.

3. Launching an audit of an organization, typically via the Canada Revenue Agency (CRA). This could lead to the loss of their charitable status and subsequent ability to raise funds.

4. Shutting down an entire organization or withdrawing its legal right to operate. When the process of doing this got under way, those organizations or individuals within them would typically be slandered with specious accusations of anti-Semitism or offering support for terrorism.

The organizations that focused on human rights work appeared to be attacked with the greatest vigor. Each that I looked at which received government funds were defunded, except one that chose to abandon a small project after being threatened with defunding. One was even forced to cease operations. All were audited by the CRA, consistent with Broadbent Institute research finding (24) in 2014 that the government had been targeting left-leaning charities it disagreed with politically, while leaving right-wing ones alone. Unfortunately, the Broadbent Institute report somehow failed to note the link to Israel and Palestine behind any of those instances, even though this oppression may have been honed first on them.

Perhaps most astonishing was that even though running projects in the OPT under military occupation is incredibly hard, the interviewees I spoke with all found the greatest obstacle to be the Canadian government and politics.

Mainstream Consistency with the GPC?

Thus, the GPC leadership’s actions after its July convention indicate its fear to challenge, or perhaps an endorsement of the political status quo in Canada, which is to support and sustain Israel’s occupation policies in the OPT. The May leadership’s tactics have included: her threatening to resign, organizing a special December 2016 (25) meeting to reconsider the resolution, belittling the resolution as the actions of an extremist fringe and firing (26) several prominent members from her shadow cabinet position – Lisa Barrett, Colin Griffiths and Dimitri Lascaris – for endorsing the membership’s democratic decision. The firings mirror a purge (27) carried out during the 2015 Canadian election campaign by the NDP leadership of candidates who had expressed concern about Palestinian rights. It is in line with the equally harsh crackdown by the Conservative Harper government on Canadian aid organizations. It is in sync with the Justin Trudeau publicly castigating (28) a Montréal student group for adopting a boycott resolution during his 2015 election campaign, and Paul Martin’s firing of ardent anti-war, Palestine rights MP Carolyn Parrish (29) in 2004.

If the GPC remains committed here to the status quo of suppressing dialogue about one of the world’s most important human rights issues, and a case of serious environmental degradation (30), this raises questions about its commitment to its own core beliefs and what differentiates it from other parties. It also leaves the ever-growing, large number of Canadians concerned about human rights in the OPT without a party to represent their voice, or to protect them when they are oppressed by their own government/politicians. Worse, the GPC leadership appears ready to suppress such people, too. That remains consistent with Canadian politics over the past fifteen years.