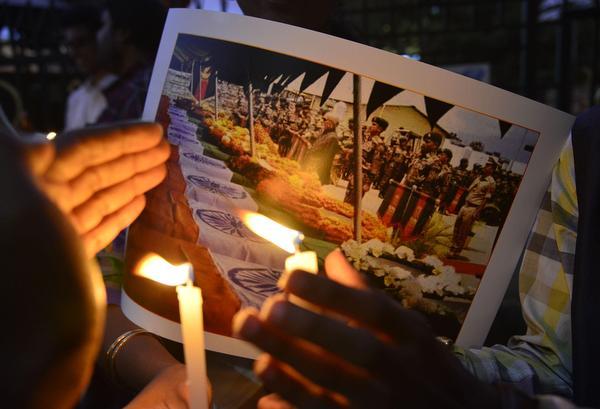 Security anxieties spiked after the September 18 suicide attack on an army post near Uri in northern Kashmir. But help was at hand from the Indian media. As the 18 army personnel killed in the raid were sanctified as “martyrs”, two months of strife in Kashmir were quickly effaced from public memory.

This application of the term “martyr” reversed the manner of its use in Kashmir for the 80 or more killed in two months of protests since the militant Burhan Wani was eliminated in a security operation on July 8. If two sides to a conversation cannot agree on basic terms — such as martyr and terrorist — there is sufficient reason to disengage and begin the dialogue anew from first principles.

An estimated 4,00,000 bore witness to Wani’s martyrdom at his funeral on July 9, a situation so threatening that assembled security forces applied lethal force to beat back the rage, setting off a spiral of violent protests yet to abate. Bearing witness to the martyrdom of 18 army personnel in Uri were their close families in India’s scattered villages and an army of raging media warriors who egged on a parade of commentators to outbid each other in violent rhetoric.

Once the sheer folly of the war party was exposed, the focus shifted to diplomatic means earlier disdained. The isolation of Pakistan in global councils was portrayed as a mission accomplished, and Uri as a turning point in its plunge towards permanent ostracism.

For obvious reasons, the blessings of Washington DC were crucial in this endeavour. The Uri attack came just days ahead of Pakistan Prime Minister Nawaz Sharief’s appearance before the UN General Assembly, when he expectedly made a plea for intervention in Kashmir. Uri afforded the ammunition for India to fire back.

By then perhaps, the Indian media had begun to see visions and hear sounds from the netherworld. US Secretary of State John Kerry was reported to have given Sharief an “earful” when they briefly met on UN General Assembly sidelines. The official transcript of Kerry’s meeting with Sharief, published soon afterwards, told a different tale, of shared concern over terrorism and US appreciation of “recent efforts by Pakistani security forces to counter extremist violence”.

Regional issues entered the dialogue, notably in regard to Afghanistan. And the two sides seemed united in concern at “recent violence in Kashmir — particularly the army base attack”. This only made it imperative for “all sides to reduce tensions”.

Even as one illusion was dissolving, the media created another. On September 23, India’s largest English daily reported a coordinated move by the US, India and Afghanistan, to cut Pakistan out of the Central Asian strategic equation. The discussions purportedly heralded a decisive shift, with Iran and even China keen to join.

What really happened is that India’s ambassador to Afghanistan and Afghanistan’s Deputy Foreign Minister met with a US State Department official — a level of engagement which suggests no decision of consequence. The US State Department’s official record was predictably anodyne, merely reaffirming the three sides’ “shared interests in advancing peace and security in the region, as well as countering terrorism”.

Concurrent events in the Afghanistan theatre represented a substantive shift, though not to India’s advantage. On September 22, Afghanistan signed a truce with Gulbuddin Hekmatyar and his faction of the Hizb-e-Islami, which had remained implacably opposed to the new order since the 2001 US intervention. Hekmatyar is best remembered as Pakistan’s man, an ethnic Pashtu and battering ram of the ’80s jihad, whose truculence contributed to the chaos of Afghanistan after the Soviet withdrawal, till the Taliban restored order, after a fashion.

Soon afterwards, the US State Department commended “the Afghan government on its achievement”, which it saw as a step “towards a comprehensive resolution of the conflict in Afghanistan”.

Pakistan’s unalterable geography and its military competence, make it a partner of choice for regional and global powers with stakes in Central Asia. On September 24, Russia began a two-week long military exercise with Pakistan, a development that would have been impossible in the Cold War years.

Here again, the Indian media authored a script about the cancellation of the exercises that failed the reality test. A few words of consolation were on offer from the Russian embassy in Delhi, emphasising the limited scope of the exercises and the care taken to avoid any footprint in “so-called Azad Kashmir” or any other “sensitive or problematic areas like Gilgit or Baltistan”.

India has been engaged in a rather difficult, if not impossible, manoeuvre: sustaining a durable relationship with Russia, while offering to partner the US in confronting China and neutralising the latter’s “all-weather friendship” with Pakistan. Early September, Russia engaged with China in a joint naval exercise in the contentious waters of the South China Sea. Russia was risking the ire of Vietnam, not to mention other littoral states such as the Philippines, Malaysia and Brunei. But the larger objective of thwarting the US pivot to Asia trumped the lesser inconveniences.

These wrinkles in the geopolitical map leave few safe options for India in putting down Kashmir’s seething rebellion. An earlier approach sought to heal the wounds of history by transcending national frontiers and creating a broader framework for cooperation within a regional context. This now stands fatally damaged by India’s decision to boycott a forthcoming South Asian summit. That leaves no option but active repression, with a complaisant media’s frequent flights into fantasy as sole solace for its executors.

Sukumar Muralidharan is an independent writer and researcher based in Gurgaon