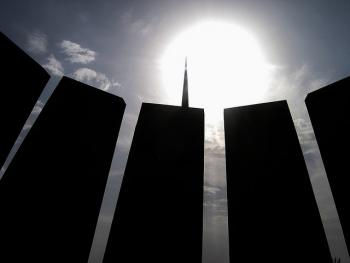 I first heard of the vague concept of the Armenian Genocide when I was 13 reading a Kurt Vonnegut novel called Bluebeard. The book was first published in 1987, and only the narrator’s distant parents had actively experienced and survived the event. No great care was given to the story, almost a residual anecdote about human indignity contrasted against more visceral – yet still dissociated – memories of the narrator’s experiences in WWII. I remember performing a few perfunctory Google searches, but stopped soon after from attempting to learn anything else.

This example of a personal ignorance – a disregard for the history and tragedy of yet another marginalized population – underlines the arrogant and generalizing tendency of western, white cultural and political memory. I read it in a book, but not a textbook or required reading. My curiosity was piqued, not by sheer human violence, but by the abnormality of such an event not being part of my worldview. Either through selective memory or what Sedef Arat-Koc calls the “fundamentally disingenuous” approach to genocide remembrance in Canada, such generic discussions of horrific events veil any true historical impact or potential healing. Arat-Koc goes further, highlighting and disputing the specifically political components of choosing which genocides to commemorate and which to ignore.

Essential power dynamics determine what is remembered. Privilege bubbles to the top, where white male hegemony and the all-too-real polemics associated with such patriarchal and capitalistic structures hold high court. Arat-Koc smartly emphasizes a chilling theme in Canadian genocide remembrance, where priorities for national memorialization mainly circle around white-suffered atrocities (the Holocaust, Stalinistic purges, and the massacres of Bosnia) or genocides tinged with the red scourge of Communism (the Khmer Rouge). Commemoration further entrenches an already privileged economic, social and cultural mindset. Absent from Arat-Koc’s list are the U.S. instigated tragedies in Central and South America or more tragedies like the Armenian Genocide with less direct political influence.

Postured and propped memories only serve to demean the entire institution of remembrance. Complaints of lily-white memorials do not at all attack the brutal reality of the Holocaust or any other historical tragedy. Instead, communal memory flows toward a numbing hagiography instead of a critical investigation into the mitigating political and economic factors that may have led to such disasters.

Another strong entry in the forgotten failures of humanity, Joshua Oppenheimer’s Indonesian genocide documentary The Act of Killing aims to fully elucidate Arat-Koc’s complaints of normative memorialization of trauma. Detailing an American-supported cleansing of Indonesia’s dissidents and communists between 1965 and 1966, Oppenheimer allows the genocidaires to recreate their own acts with a disturbing sense of initial glee. By giving the camera to gangsters-cum-paramilitary soldiers, The Act of Killing inverts the process of political regularization of violence and memory. The films protagonist-executioner, Anwar Congo, initially sets out to film a companion piece to Indonesian history, one that he would be proud to show his grandchildren. By the end of the reenactment process, Congo is sputtering and dry-heaving on an apartment building roof where many of his killings took place. The startling about-face grows directly from facing previously commonplace violence in an authentic and austere manner. Government-sanctioned killings obviously constitute genocide, even to the perpetrators. Politics cannot simply account for the lack of discussion. There are no words, as Anwar Congo discovers, but only a choking sensation when finally encountering the enormity of lost human potential. Dissenting artists and academics must continue to clamor for such inquiries into the failures of modern memory.

The questions of remembrance that Arat-Koc raises and the visual confrontations that Oppenheimer captures belabor the same point: in a murky subjective political landscape, the loss of human life is one of the only objective markers of historical and cultural failure. The disregard for Indonesian lives or Indigenous women in Canada – again from Arat-Koc – prioritizes a particular gaze that avoids singular facts for more stilted perspectives. Denying facts due to the associated cultural upheaval of alternative political narratives is a trap into which many first-world citizens fall. It is not enough to merely recognize the inequality.

Because it seems that is all I do. I reread that Vonnegut novel frequently, but even Bluebeard flits over the Armenian Genocide for in-depth examinations of the protagonist Rabo Karabekian’s role in a more prominent tragedy. Oppenheimer’s sequel to The Act of Killing, The Look Of Silence, further extends his empowerment of the disenfranchised by allowing Indonesian genocide survivors to confront their killers. His examination follows a most noble goal: give those with the least power the greatest opportunity to examine their lived experience and speak it into the cultural memory of a largely unknowing public. I know I fall complicit, but filmmakers like Oppenheimer and academics like Arat-Koc aim to destabilize the white malaise that often blankets conventional memorialization.

The ugliness of history needs to be encountered head-on. The voices that clamor for alternative remembrance, and, hopefully, radical change, must not come from the whiter side of experience, but the actual margin. People of color, women, and all other silenced groups deserve their moment to call attention to both past and present atrocities. Despite what the Harper government or other entrenched political institutions may extoll, the past is not simply a bauble to hold up and examine to fulfill the curiosity of the culturally privileged. The past apparently carries allowances for future indignities, hidden in the weight of previous unmentionable tragedies.