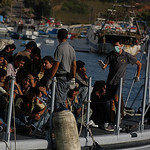 Last April over 800 people drowned to death in the Mediterranean Sea after a ship packed full of migrants capsized on its way from Libya to Italy. The victims of this tragedy were much like the other thousands of migrants who make this voyage across the world’s deadliest maritime migration route. Some are fleeing systematic political persecution in countries like Syria and Eritrea, while others are escaping a complete lack of any meaningful economic prospects in countries like Somalia.

Whatever the country of origin or reason for leaving it, these people will, for the most part, make the long journey to Libya where they pay a hefty fee to be loaded onto overcrowded fishing vessels or inflatable dinghies destined for the shores of Southern Italy or Malta. In many cases they will be intercepted by Italian or Maltese maritime authorities, who will detain the arrivals for perhaps a year or more to establish their identities and evaluate their asylum status. In the best case scenario, they will be assigned a host country, typically Germany or Sweden, for temporary or permanent settlement.

In many cases, however, migrants do not survive the perilous journey. In addition to drowning, migrants risk asphyxiation from being shoved in overcrowded boat hulls, dehydration from the unforgiving sun, and physical abuse from the smugglers. These risk factors have made the Mediterranean Sea the most dangerous border between countries that are not at war with each other.

Since the termination of Mare Nostrum, the Italian-led search and rescue mission once tasked with retrieving these migrants from international waters, the death toll has reached an alarming high. From January to April of this year there have been about 17 times more deaths— more than 1 800 people— than there were during the same period of last year. The response to these staggering figures, the “European Agenda on Migration” released on May 13, is far from adequate.

The document comprises two main pillars. First: a rough blueprint for a quota system in which all European countries each agree to take responsibility for a certain share of migrants and asylum seekers. Britain quickly rejected the plan, in response to growing anti-immigrant sentiment on its shores. France, Hungary, and Poland all promptly followed suit, finding nooks and crannies in the document where they could list their own opt-out provisions.

Thankfully, much wider agreement was found on the part of the agenda that involves just shooting something. The agenda’s second major pillar is a naval operation that would involve targeting boats suspected of harbouring migrants and seizing or destroying them before or slightly after leaving the shore. The problems with the operation are almost too numerous to count.

First, destroying migrants’ methods of crossing the Mediterranean is not going to quell their desire to do so. In all likelihood, smugglers will simply try and pack more and more people into the dwindling number of remaining vessels, increasing the risk of the voyage. Also, since they will now be fearing interception by European navies, smugglers will likely go to greater lengths to conceal the migrants inside the vessels. This will increase the chances that boats with undetected migrants still on board will be destroyed. A memo leaked by the Guardian even contains an explicit mention of the “collateral damage” the proposed plan will likely entail. Finally, since the vessels used for the trans-Mediterranean voyage are typically fishing boats leased out from fisherman on a trip-by-trip basis, such an operation will have a substantial impact on the livelihoods of already desperate Libyan fisherman.

One would be forgiven for thinking that simply ignoring a humanitarian crisis is the worst course of action. Instead, Europe has upped the ante by militarizing an already deadly migration route and targeting a population that has already endured unspeakable hardships.

If the European Union is even remotely committed to the humanitarian principles it ostensibly holds, than it must end this senseless use of state violence, and begin crafting policies that will actually make a difference. The decision to increase funding for Joint Operation Triton, the massively scaled back replacement for the Mare Nostrum operation, is a small start.

Most importantly, however, Europe must promptly approve the quota agreement contained in the agenda and, beyond that, create a much more extensive plan for settling migrants in Europe.

Even if the quota provisions proposed in the Agenda on Migration were passed tomorrow, Europe would still be far from shouldering an appropriate share of those seeking refuge. According to the UNHCR, 436 000 people applied for asylum across Europe last year, of which 219 000 were migrants who made the trek across the Mediterranean. The EU Agenda on Migration, however, offers a mere 20 000 asylum placements in the entire continent. Compare these numbers to Lebanon and Jordan, who together have taken in over 1.5 million refugees from the Syrian civil war and other Middle Eastern conflicts.

The biggest hurdle in the way of settling more migrants in Europe is the growing prevalence of racist and xenophobic sentiment among both EU politicians and the voters that support them. The mere existence of the United Kingdom Independence Party or the National Front in France illustrate the success of anti-immigrant fear mongering on the continent.

One hopes that the social and economic benefits of an ethnically and culturally diverse Europe will one day be realized and embraced. One also hopes that EU politicians will come to view the difficulties surrounding immigration as signs that it needs to be done better, not abruptly halted. Unfortunately, it often takes people a very long time to realize that they are sitting on the wrong side of history. And, sadly, every second we wait for them, more people will suffocate and drown mere miles from European shores for completely preventable reasons.