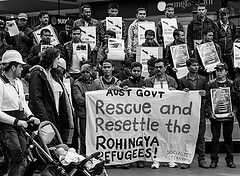 The Rohingya people are an oppressed Muslim minority group in Buddhist-majority Myanmar that have faced an enduring history of ethnic discrimination and systemic poverty. In Myanmar, the Rohingya are rendered effectively stateless and are denied basic rights, including citizenship and access to education. Most Rohingya live in western Myanmar, also known as the Rakhine region, which borders Bangladesh. A significant portion of the Rohingya people also inhabit Bangladesh where they experience high levels of poverty and grave deprivation. The UN identifies the Rohingya as one of the world’s most persecuted ethnic groups. Under such dire circumstances, the Rohingya are susceptible to human trafficking and other degradations, in a futile attempt to escape their current conditions.

The Mahanirban Calcutta Research Group (MCRG), which facilitates and supports the peace movement in West Bengal, stated that forced migration has become an increasingly critical global issue. The number of people forcibly displaced by violence within their own country rose from 33.3 million in 2013 to 38 million by the end of 2014. The International Organization for Migration (IOM) applies ‘forced migration’ as a general term referring to the movement of refugees and those internally displaced by conflict.

In the first quarter of 2015, 25,000 migrants were smuggled by boat from Myanmar and Bangladesh, which amounts to double the same period in 2014. Many migrants smuggled and trafficked to Thailand were held in camps until they paid traffickers a ransom, before being granted the freedom to access the Malaysian border. The IOM estimated that 8,000 migrants from Myanmar and Bangladesh are currently stranded at sea. In response to this crisis, representatives of 17 countries including Myanmar, came together at a regional conference in Bangkok, Thailand on May 29. International organizations such as the UN Refugee Agency (UNHCR) and the IOM were also present at the conference.

Indonesia and Malaysia agreed to provide Rohingya with shelter for one year. Thailand offered humanitarian help but refused to shelter refugees. According to the IOM Director General, William Lacy Swing, we must radically alter the way migrants are viewed. Many nations were “built on the backs of migrants and with the minds of migrants” and so, we must “look upon migrants as opportunities rather than a problem”. The conference ended Friday with no major breakthroughs. However, one thing is clear: the crisis is escalating quickly and urgent action is required.

Myanmar’s attendance at the conference unfolded under specific circumstances. Zaw Htay, director of the office of Myanmar’s president, stated that the country would not attend if the word ‘Rohingya’ appeared on the invitations. Htay also stated, without any apparent irony, that the “gravest violation of human rights are committed by those corrupt officials who are involved in human trafficking activities”.

By denying them any patch of earth, the Myanmar government is directly implicated in the decimation of the Rohingya people; acts that must be deemed ethnic cleansing. The blatantly oppressive and racist policies instituted by the Myanmar government have left the Rohingya in a state of immeasurable human suffering, which calls for explicit discussion and direct action.

Volker Türk, the UNHCR’s Assistant High Commissioner for Protection, urges that attempts to resolve the plight of these migrants must address the root causes of their flight. Initially, “[s]aving lives must be the number one priority”, said Türk. But further, “a legal status for all habitual residents recognizing that Myanmar is [the Rohingya’s] country is urgently required. Access to identity documentation and the removal of restrictions on basic freedoms is needed to normalize and stabilize lives.”

Only a concerted effort by the source, transit and destination countries can protect the Rohingya and successfully prosecute perpetrators of this crisis of misery and death. The MCRG states “[w]hat is essential is to develop an understanding of the causes and consequences of forced migration and gaining the intellectual and practical skills to deal effectively with its challenges both for addressing the causes of forced migration and for the management of effective programmes to assist refugees and other forced migrants.”

Stranded at sea and left at the mercy of their tormentors, the Rohingya people continue to be unaccounted for in a long-standing crisis, which seems to be headed towards a calamitous climax of group-targeted violence. Until they are grounded in a nation-based (Myanmar) identity, this account of ethnic cleansing will only gain momentum, foreseeably resulting in a total systemic demise of the Rohingya people.