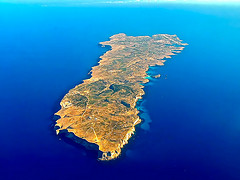 Lampedusa, a rocky, 20-square kilometre Italian island in the Mediterranean, lies 113 kilometres east of Tunisia and 300 kilometers north of Libya. In the past two decades, Lampedusa, an access-point for migrants to Italy and Europe, has become a strategic site for lethal European migration policies.

In the wake of the ongoing Mediterranean migration crisis, which Amnesty International deems a “man-made tragedy,” the European Union has militarized its migration policies and stressed the importance of border security. The European Commission’s March 2015 report on the issue claims that bolstering European standards of border management and surveillance will be the crux of an effective European response. The sections of the report that aim to address the underlying causes of ‘illegal’ migratory flows, such as civil war, persecution, poverty, and climate change, also use the national security rhetoric to prove the necessity of tightened borders, in both European- and origin-countries. The sections on bilateral cooperation with North African and Middle Eastern countries focus on combating smugglers and providing scant humanitarian aid, with insufficient plans for expanding European accommodation of “illegal” or “irregular” migrants.

The EU’s insistent and insidious emphasis on ensuring so-called national security by patrolling tightened borders, targeting criminal smuggling networks, and forcibly relocating “illegal” or “irregular” migrants is not a new phenomenon. Lampedusa, closer to North Africa than Italy, has served as the laboratory for European militarized migration policies and border security for decades.

With the Schengen Agreement of 1999, migration from North Africa and the Middle East across the Mediterranean increased considerably; Italy was now the doorstep to the borderless, opportunity-rich Schengen zone of the EU. However, with the Schengen Agreement came new visa restrictions on non-EU citizens entering from the outside. Migration to Italy thus became simultaneously more desirable and more difficult.

Several years later, at the Thessaloniki Summit in 2003, the United Kingdom submitted a proposal for “regional protection zones” and “transit processing centres” located outside the EU’s borders. These centres would be ‘protection’ zones where migrants, refugees, and asylum-seekers waited while they submitted immigration or asylum claims to EU countries. The proposal sought to reduce the number of asylum seekers by delocalizing the EU’s southern external border and repatriating Europe-bound migrants. The island of Lampedusa would thus become the first and last stop for many Syrian, Libyan, and Tunisian migrants. Despite the proposal’s rejection by France, Spain, and Sweden, the EU Informal Justice and Home Affairs Council implemented five pilot projects. These projects aimed to upgrade existing migrant processing centres and further develop asylum laws in Algeria, Libya, Mauritania, Morocco, and Tunisia in order to shift the onus from the EU abroad.

The results of the proposal, and of reducing the number of legal migrants into the EU in general, was that exponentially higher numbers of ‘illegal’ or ‘irregular’ migrants attempted, and died along, the journey across the Mediterranean. In this sense, the EU’s policies created the structural illegality and irregularity of the current Mediterranean migration crisis. The processing camps on Lampedusa and elsewhere, which were institutions intended to deport migrants, actually “produce the conditions of ‘deportability’” of migrants. The EU’s migration policies create and exacerbate the very migration crisis they purport to mitigate.

In August 2004, Italy and Libya signed a joint agreement on combating illegal migration into the EU. The agreement facilitated the October 2004 deportations of more than a thousand ‘irregular’ migrants from Lampedusa to Libya on military airplanes. The collective deportations continued through the spring of 2005 with almost weekly regularity.

As the migrant death toll continued to rise, due to shipwrecks during the crossover to Italy and deaths in the desert as the result of the deportations to Libya, several European institutions, social movements, and NGOs mobilized to put an end to the collective deportation process. Ten European organizations filed a joint complaint with the European Commission against Italy’s role in deporting migrants to Libya. In the “Resolution on Lampedusa”, the European Parliament called on Italy to grant UNHCR access to the Lampedusa centre, guarantee the individual examination of asylum, and halt the collective deportations. The International Organization for Migration signed an agreement with Libya that aimed to prevent ‘irregular’ migration both to and from the country.

The movement to end the collective deportations from Lampedusa culminated on 2 April 2005, the European Day for Freedom of Movement, when activists staged a protest at the Blue Panorama offices, the charter carrier in Rome that was used for the deportation flights. After the protest, Blue Panorama retracted their services.

This was followed in September 2005 with the visit of the Committee on Citizens’ Freedoms and Rights, Justice and Home Affairs to Lampedusa to assess the procedures, treatment of detainees, and the management of the processing centre. Their report denounced the Lampedusa centre for inadequate accommodation resulting in overcrowding of the facilities, poor hygiene conditions, and the use of violent and forceful police tactics towards migrants during the deportations.

The report found that migrants in Lampedusa did not have access to asylum procedures: migrants were expelled to Libya, which was most often not their country of origin, and does not have an asylum system capable of managing the high flow of deported migrants. Libya has also not signed the Geneva Convention on Refugees.

These processes have not stopped; in 2008, Italy and Libya signed a ‘friendship pact’ whereby Italy provided Libya with military equipment, training, and infrastructure investments in return for harder patrolling of Libyan land and sea borders and the transfer of indicted migrants to detention centres in Libya. In 2009 and 2010, the countries began ‘push-back’ operations whereby migrant boats were redirected back to Libya. The current EU response to the migration crisis in the Mediterranean represents the failure of these European measures to adequately address and accommodate the influx of migrants.

Rutvica Andrijasevic concludes that the establishment of extraterritorial processing centres “and the construction of Italy-funded detention centers on Libyan territory, deportations to and from Libya, and joint Italian-Libyan police patrolling of Libyan coastline are all instances that delocalize the EU’s external border from South Italy beyond the Libyan coastline into its territory.” This process of border delocalization, which will undoubtedly intensify into 2015 as the EU clamors to address the intensifying migration crisis, will continue to put thousands of migrants to their deaths by creating the conditions of illegality and deportability. Until the EU revisits and radically revises its migration, asylum, and refugee policies, the doors to the European continent will remain locked, with national security hounds patrolling the entrance.