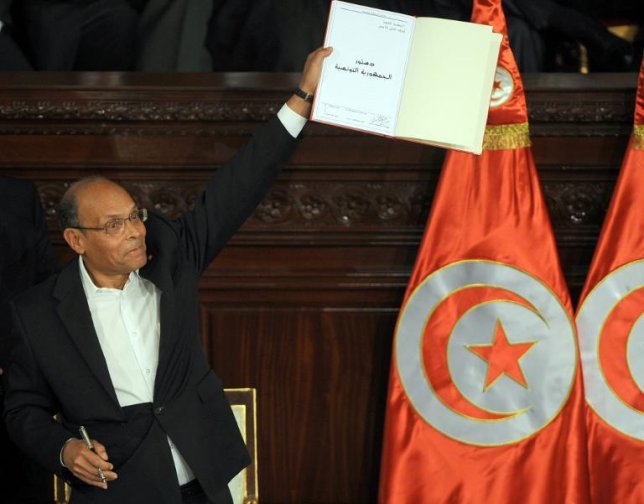 Three years after the Tunisian Revolution

14 January 2014 marked three years after ousting Ben Aly and his family and announcing the breakdown of the despotic regime under the pressure of an unprecedented insurrection that burst out in Sidi Bouzid, on December 2010 and spread across all regions and sectors. The popular movement overwhelmed the huge repressive machine that had killed and injured hundreds of martyrs across the country in less than a month.

That date was a turning point for Tunisians who saw their long-held dream, entertained by generations of political and associative militants during decades of tyranny come true.

It was, also, a precedent to the peoples of the region who realized that getting rid of similar dictatorships is possible. Therefore, slogans of the Tunisian Revolution calling for the downfall of the regime, the building up of democracy and social justice have become the everyday anthem of mobilizations of the Arab world and beyond.

Certainly, reality is more complicated than dreams and calling for democracy is easier than its consolidation, but we’ve gone a long way: a High Commission for the Realization of the Revolution Objectives was set up, establishing a comprehensive mechanism that helped organize the political and associative life. Also, it offered a space for a debate between most public life protagonists on the best ways to achieve success to the burgeoning democratic process. Then an Independent High Commission for elections was established. It ensured the first independent and transparent elections in Tunisia, transparency that was praised by national and international observers. A National Constituent Assembly has been put in place, tasked with drafting the Constitution that would respond to Tunisians’ aspirations.

However, the post-23rd October elections have turned out to be more difficult than predicted and has disappointed popular expectations. It soon appeared that fulfilling the objectives of the Revolution was not a priority to the governing majority. The debate over the Constitution has been diverged towards previously resolved issues such as the status of women, the Shariaa, freedoms of conscience, the freedom of artistic creation…

The combination of international and national factors, the way the country has been governed; loose government reactions in law enforcement have fostered the spread of disorder, from the infiltration of arms to the spread of violence and political assassinations. The political situation has not been better: it has shown signs that the country was about to slide down the steep slope of tyranny again. Repression targeted almost all the driving forces of the nation; journalists, artists, political and associative activists, union leaders… in a word, those who disagree with the official policy.

“Classical” repression has repeatedly affected popular mobilizations: 9 April 2012 in Tunis, end of November 2012 in Siliana, 4 December 2012 in front of the UGTT union.

The economic and social situation has even been worse and seems to get out of control: high unemployment, galloping inflation, a low purchasing power that has affected not only poor and disadvantaged citizens but also, the middle classes. On this level, all indicators present a grim picture. It is, in fact, the political treatment of the social issues that is at stake: lack of an economic vision, unilateral contested measures, absence of communication with social partners and civil society….All this has maintained tensions and stepped up protests.

Now and despite signs of easing political signs with the resignation of Mr. Aly Laarayadh and the nomination of a new president of government, Mr. Mehdi Jomaa, with the task to form a new government, the country has not seen the end of the tunnel, yet.

We believe that the success of this transition requires some important conditions: • A trend reversal of the economic and social crisis faced by the country; • Combating all forms of violence, extremism and terrorism; • Reviewing all partisan appointments as predicted in the road map; • Dissolution of the violent Leagues for the Protection of the Revolution; • Neutrality of mosques and worship places.

But getting out of the current crisis is not the task of the government only. It concerns, also, independent competent people, who are able to repair past mistakes and help the political life get back on the track of democracy; and at the same time a vibrant civil society able to assume its role of accomplishing the transition and create the necessary conditions to achieve transparent and democratic elections.