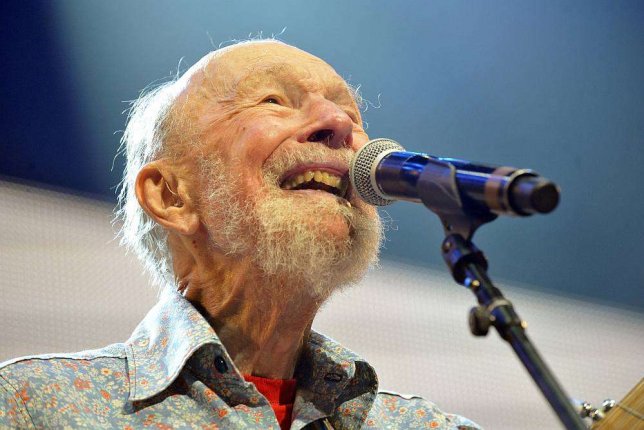 A Time to Live, A Time to Die

I can’t remember my first Pete Seeger concert. But I do vividly recall that in my mid-20s I became a Pete Seeger groupie. I probably went to one of Pete’s concerts every month. He was everywhere, at big rallies and (very) small ones. And if he was there, so was I.

I doubt anyone went to a Pete Seeger to hear him perform, although my eldest brother, who’s the World’s Leading Authority on Pete, tells me that, in his prime, Pete was probably the best banjo player in the world. We went to hear ourselves sing. God endowed me with one of the human race’s most egregious voices. (That’s what everyone tells me and, on the rare occasions when I do hear myself sing, I am forced to agree.) But, amidst the cacophony of everyone else’s voices at Pete’s concerts, my own harmonized, or so I would imagine. Anyhow, he did ask me to sing along.

I went to Pete’s concerts because he attracted and created a community of beautiful souls.

He represented everything that was pure and good, and he brought out the angel in all of us sitting in the audience. If I had discovered that Pete cheated on his wife, it would probably have devastated me. He embodied all the values of my youth: Taking a side for what’s just (“There are no neutrals here”), devoting one’s life to a better world, and brimming with the confidence and idealism of youth that this better world was a-coming.

When I was a freshman in college, I hitched a ride to Cornell University to hear Pete. It was the perfect fall night, the crisp air, the stars twinkling in the sky and reflecting off Cayuga lake. I can still feel the exhilaration of being there. I was young, filled with dreams and hopes, ready to conquer the world. And there was everyone else stretched out across the great lawn, who would conquer the world with me. Because it was about us, not just me. Pete once said that Dorothy in the Wizard of Oz got it wrong when she asked, Birds fly over the rainbow, why then, oh, why can’t I? “Because it’s not just about you,” Pete scolded. “You should have asked, why then, can’t you and I?”

Another time I went to a fundraiser at Carnegie Hall for African-American radical Angela Davis. Pete was there of course. (After the concert I purchased a box of Angela Davis Christmas cards that I sent all my friends from high school. Only God knows what they thought.) I still remember the song he sang, Die Gedanken Sind Frei (Thoughts Are Free). It became my credo. My wonderful website master, Sana Kassem, created a video of my life with Pete singing it in the background. It’s the only thing about me that I can bear to watch. http://www.youtube.com/watch?v=-3LpWsFMTMs.

Once I went to a commemoration for Julius and Ethel Rosenberg, who were convicted and executed for passing the “secret” of the atomic bomb to Soviet Russia. Only a handful of mostly octogenarian Communist Party members showed up. But Pete was there. I learned a lesson that stayed with me: You’re never so important that “little” people don’t count. At the end of the concert, as he was exiting, I gave Pete a big hug and kiss. He seemed nonplussed, I was blissed out.

Pete was a Communist, albeit a semi-lapsed one. It meant I was not only on the right (i.e., left) side of History, but that the best that the human race had to offer was there with me. If Pete Seeger and Paul Robeson were Communists, then so was I! I loved listening to union songs (I still know all the verses of Solidarity Forever and Union Maid), even if everyone around me in high school, grooving on Jimi Hendrix and The Vanilla Fudge, thought I was a complete nut and bore. Later in life Pete mused that if he had lived in Stalin’s Russia, he would probably have been the first one arrested and shot. I carried that heavy load around with me for a long time.

When Pete entered into his ecology phase, I was of a mixed mind. The sentiments weren’t bad when he sang, “One blue sky above us,/ One ocean lapping on our shore,/One Earth so green and round, Who could ask for more?” But then I thought, Hey, Wait a minute. What happened to Class Struggle? (Yes, I was that crass.) But I likedGarbage, especially the lyric that went, “your stocks and bonds, all garbage.” And I remember that at the first Earth Day in 1969, Pete didn’t sing an ecology song, but insteadBring Them Home. “If you love your Uncle Sam,/ Bring them home, bring them home.” “Them” being the U.S. troops in Vietnam. Being a Maoist I was also committed to armed struggle, so I relished the song’s verse, “There is one thing I must confess,/I am not a pacifist./ If a country invaded this land of mine,/ I’d be the first one on the firing line.” It was actually a backhanded defense of the Vietnamese people’s right to used violent force against the American aggressors.

Like most everyone else, but probably more often than most, I dread my mortality and anguish over the purpose and meaning of life. I always wanted to ask Pete the secret of life. I figured if anyone knew, it was Pete. (He was also a voracious reader. He always carried a paperback in his back pocket.) I never did get to ask him. But once Amy Goodman of Democracy Now! did ask Pete what he was most proud of as he marked his 94th birthday, and lived as eventful and fulfilling a life as anyone could hope. Without missing a beat, he replied. “My marriage.” It caused me to think a lot, and still does.