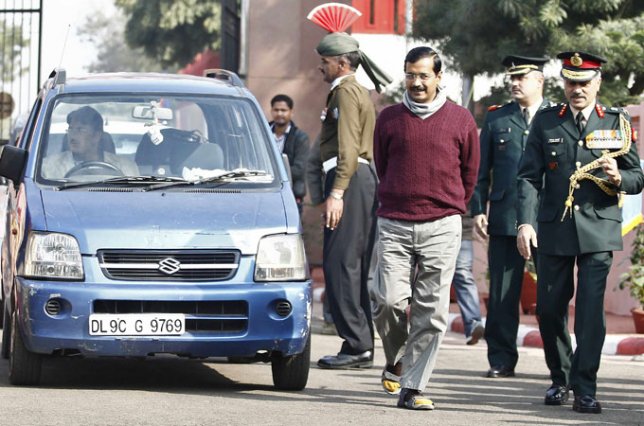 India: The Anarchy of Simple Living

For the first time in decades political pundits in India’s capital New Delhi are being compelled to take note of local politics in the city state as opposed to pontificating on the state of affairs of the nation.

On December 28, 2013, Arvind Kejriwal, the leader of AAP (common man’s party) became the chief minister of New Delhi. At the end of the solemn swearing in ceremony (that involves pledging allegiance to the constitution) he broke into an old Hindi film song about universal brotherhood. It was clear that Kejriwal intended to be very different from the usual member of the political class that has ruled this rambunctious democracy for 66 years.

Kejriwal has since stunned the city with the speed of his decisions. An audit of private power companies has been announced which only adds to the sense of foreboding the traditional business class has against a party that has made fighting against corruption its central theme.

Business growth in India has always been driven by the links between industrialists and politicians. It is known that politicians frame policies and/or give land/environment clearances to benefit particular players. AAP members and leaders call this "crony capitalism" and have shown real intent to, at the very least, give some anxious moments to those who occupy the world of privilege and cosy underhand deals.

Indeed it can be argued that since the opening up of the Indian economy in 1991, there has been a certain celebration of the values of consumerism that can be jarring in a nation where economic disparities have only increased. In New Delhi for instance, shopping malls mushroom while homeless people die in the cold each winter.

The idea of simple living has certainly not been practised by the political representatives of people who are mostly poor. Indeed until Kejriwal appeared on the scene, there appeared to be no check on the life-style and privileges of the people’s representatives.

Democracy, both at the state and national level, has become the preserve of a few influential families. At the same time, the costs of elections soared as the politician-business nexus thrived. Simultaneously, individuals with interests in mining, controlling lands and natural resources, entered politics themselves or made deals with existing politicians.

By refusing the red beaconed transportation, lavish accommodation or security, Kejriwal has challenged an entire culture of privilege. After he unsettled the political consensus, the chief minister of Rajasthan announced she would give up her official residence and halve her security, while the chief minister of Uttar Pradesh has cut down his motorcade of vehicles from 17 to five.

Clearly, Kejriwal has already become a catalyst for change at the superficial level. He must be credited for giving back some dignity to the notion of simple living and modest means. That is not an insignificant achievement in a developing country like India, where value systems can be lost in the rush to transform.

That Kejriwal is making many citizens of New Delhi feel empowered, in the two weeks he has been in office, is undeniable. In the area near this writer’s home, residents have begun to organise themselves to pick up the garbage. After years of cynicism and hopelessness, there is some belief in people that they themselves can be agents of change. But will it last, or is this just a short burst of good feelings?

Consider what happened when Kejriwal announced that the entire cabinet would sit outside their offices at the New Delhi secretariat every week on Saturdays. A near stampede followed as thousands turned up - Kejriwal himself had to leave the venue.

He was instantly criticised by rivals for being an agent of anarchy and only interested in grandstanding.

Will AAP be able to sustain the sense of transformation without taking clear ideological positions? Some of the more interesting critiques of the phenomena have come from left-leaning commentators.

As things stand now, the left is increasingly irrelevant in bringing about real change, and its political influence has shrunk as the communist parties lost one of their key areas of influence, the eastern state of West Bengal, in state elections over two years ago.

Yet, one may have expected more enthusiasm from the left: Since the liberalisation of the economy, AAP has been the first influential force to actually unsettle the politician-business nexus and demand scrutiny.

What is happening instead, is that commentators are demanding to know AAP’s stance on issues like Kashmir and national security, both areas on which mainstream parties have to tread carefully. Because AAP is the creation of an activist like Kejriwal, there is an expectation that he will take a position on every issue.

But within AAP there is an argument that realpolitik demands ambiguity on some issues. The party says it wants to occupy the middle and appeal to a cross section of opinion.

AAP has now declared that it will contest the national elections due to take place in April-May. With just a few months left, the party still does not have an organisation or structure in most states. However, its national membership drive, launched on January 10, is getting unprecedented support.

AAP could take away a section of urban votes that would have otherwise gone to the main opposition party, the right wing BJP under the leadership of Gujarat chief minister Narendra Modi who has been declared the prime ministerial candidate. The ruling Congress party seems set for a very poor showing in the elections.

As it goes national, AAP appears to want to challenge the usual political strategy of combining caste and religious groupings during elections. They say they want to appeal to people as citizens. There are valid questions on whether this can work outside urban pockets. Social divisions are more hardened in the countryside, where people make electoral choices as voter blocks.

It is difficult to predict the performance of a party that does not even have a presence in most Indian states. But what has certainly happened is that Modi has stopped being the top priority for the national media. Television audiences and newspaper readers across India are now more interested in Kejriwal

It can now be said that in the first few weeks of an election year, aam admi (common man) Kejriwal has stolen the thunder from the khaas admi (special man) Modi of the BJP, who may have imagined that the New Year would belong to him.

AAP has changed the chemistry of the impending general election, although the jury is still out on the extent to which the new force can change the arithmetic.

Saba Naqvi is a New Delhi based journalist who follows politics and issues of identity. She writes for Outlook magazine and is the author of In Good Faith, published in 2012.