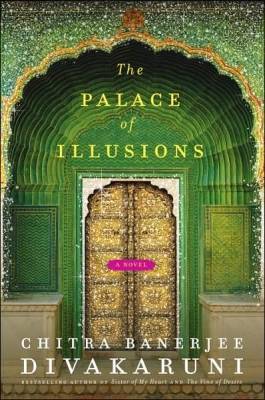 The Palace of Illusions: A Book Review

Chitra Banerjee Divakaruni’s bestselling novel, The Palace of Illusions, is an interpretation of the events of the Hindu epic Mahabharata through the lens of the woman married to the five Pandava brothers, the greatest heroes of their time – Panchali. The novel is written in first person, giving Panchali’s own thoughts on her own life. Though popularly known as Draupadi (literally meaning daughter of Drupad), she quickly reasserts herself and renames herself Panchali (meaning from the Kingdom of Panchala), rejecting the egoistic name her father gave her and refusing to believe that her identity was to be bound by the men in her life.

Draupadi has been portrayed mostly negatively in Hindu society – take a trip to India and you will fail to find girls being named after her. Many believe that it was her headstrong actions that brought about the destruction of the Third Age of Man and she is known to be a kritya, one who brings doom to her clan. But Divakaruni moves away from such interpretations to provide a new outlook on Panchali.

Divakaruni portrays Panchali as a powerful, strong, and independent woman, an equal to the men around her rather than subservient. She presents Panchali’s life as a series of choices made by Panchali, and not the people around her, giving her a voice in the overwhelmingly patriarchal society that was ancient India. Divakaruni’s interpretation of the epic provides a complete narrative, sometimes missing from the original epic, giving a stronger role to the women of the story, and portraying them as equals in society.

Though Divakaruni gives women an equal status in society, showing them to be more than just daughters, mothers and wives of great heroes of the epic Mahabharata, the injustices borne by the female protagonists constantly remind the reader that no matter how much women assert their roles in society, if men believe that they are superior to women, equality will not prevail. Parallels from Panchali’s story can be made to events from contemporary Indian society that show us that though it has been almost three thousand years since the events of the Mahabharata unfolded, society has not come much further in terms of the way women are treated. Take Panchali’s fate after her husband loses her to his opponent in a game of dice. Her husband, after wagering (and losing) everything he owned, his brothers, and himself, wagers his wife, Panchali. After he loses her too, his opponent tries to harass her by removing her sari. Though her prayers are answered and the sari becomes infinitely long, no one present in the court attempts to save her from this act of sexual harassment. Laxmi Oraon was, however, not as lucky as Panchali. In 2007, Oraon, a tribal woman, was rallying for better tribal rights in the north-east Indian state of Assam, when she was stripped naked and beaten by a violent mob, as others looked on at the incident as if it were a spectacle. Numerous other cases of eve-teasing are proof that many women are still subjected to the same public sexual harassment that Panchali suffered. Though Panchali was never raped, she received more than enough of her share of unwanted advances by men, a phenomenon that seems to be prevalent even in today’s society. While reading the novel, it was easy to relate to such events in Panchali’s life, and while she was courageous enough to fight off her offenders, nowadays such instances are so common that most women’s instincts are to ignore such advances. Though numerous years and generations separate contemporary life from Panchali’s, her life’s events are surprisingly similar to the many trials and tribulations faced by today’s women.

Though the focus is on Panchali’s life, Divakaruni is careful to include the stories of the other strong female characters, not just as Panchali’s rivals, but also as strong role-models (for Panchali and others alike). Divakaruni portrays, at length, the story of Kunti, Panchali’s mother-in-law, who devoted her life to the upbringing of her own sons and the sons of her husband’s second wife, making sure to treat them all equally, and grooming them to become kings. She also mentions the story of Gandhari, the wife of the blind king Dhritarashtra, who blindfolds herself at her marriage, choosing to live as an equal to her husband, surrendering her power as a queen and mother. What makes Divakaruni’ novel compelling and above other interpretations is that she portrays the stories of all these women as conscious choices made by them, not as roles handed to them by society or by the men in their lives. These women chose the lives that they lived, and did not simply walk into them. To give the women of ancient India such power and freedom is phenomenal.

The original epic was about gods, demi-gods, kings, princes, warriors, and other noble men. But Divakaruni’s interpretation provides a humanistic touch to the epic, making it more realistic, more relatable, and more personal. Most who read this novel will know the events of the original epic beforehand. But those who have not read the original will be disappointed that it is not the version written by Divakaruni.