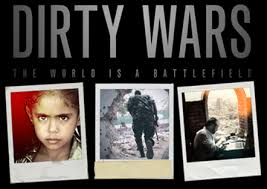 When Will Dirty Wars End?

Director Rick Rowley and journalist Jeremy Scahill’s much talked about docu-thriller Dirty Wars: The World Is a Battlefield opened on June 7 to strong positive reviews. A companion piece to Scahill’s book of the same name, Dirty Wars details the growing use of extrajudicial assassinations by the US executive branch to strike at targets around the planet, without any declaration of war or meaningful congressional oversight. And it documents the human toll of such unchecked power by featuring some of the innocent victims of this global war.

The film is anchored by several key stories that will be quite familiar to regular Democracy Now! viewers and followers of Scahill’s reporting, though in the movie each episode is presented in extended, intimate detail. We meet surviving family members and see on-the-ground footage that conveys a sense of place amidst scenes that are often, by turns, touching or grisly.

Viewers learn of the innumerable, unaccountable nighttime raids upon homes conducted in Afghanistan by US and allied forces. NATO provides virtually zero information about these operations. Journalists are habitually restricted from investigating the aftermath of these raids that terrorize proud farming villages in the middle of the night.

We meet a family in Gardez, where five innocent civilians—all related, including two pregnant women—were shot and killed by US forces in February 2010. The soldiers, who had crashed a familial celebration marking the birth of a child, took action to cover up the unprovoked attack by removing bullets from the bodies and carefully rehearsing their cover story. The family had no links to the Taliban, let alone plans to attack the United States. The very idea that peasants in a remote province in the Hindu Kush mountain range pose a threat to the United States is sufficiently absurd that it gives the lie to Washington’s motivations for the US occupation of Afghanistan. Recall that the obvious response to 9/11 would have been a focused police action, eminently feasible but never pursued, to apprehend the responsible figures in al-Qaeda. Instead we got a military invasion and a war against the Taliban.

The reason for targeting this particular family was difficult to fathom and presumably the result of false information. Who is accountable for this fatal error? So far as can be determined, no one. Vice Admiral William McRaven, commander of Joint Special Operations Command (JSOC), apologized only after the cover-up proved impossible to sustain. Although the family asked McRaven to turn over to the Afghan government the source of false intelligence, there is no indication that anyone has ever faced charges for the quintuple homicide.

The journalist who broke the story, Jerome Starkey, subsequently faced reprisals from NATO. They castigated him for deviating from the usual practice of loyal party journalists, who are content to take dictation from military press briefings in Kabul.

If it had not been for Starkey’s investigation, the murders would likely never have been known outside the family’s village. Thousands upon thousands of these night raids have occurred in Afghanistan with no outside oversight or investigation. Thus there is no way to know how many similar incidents have occurred.

The story continues well beyond Afghanistan. As the film’s subtitle indicates, much of the world is now part of the battlefield in the Pentagon’s eyes. In southern Yemen, as the most powerful tribal leader in the region, Saleh bin Fareed, informs us, the presence of al-Qaeda was undetectable until after US Tomahawk missiles slaughtered dozens of people in al-Majalah in December 2009. In the years since the attack, al-Qaeda has been on the rise. The victims of the al-Majala attack were from one of the poorest tribes in all of southern Yemen.

Though dozens of people were killed in that one incident, it is only due to the work of one local journalist—the only one to investigate the al-Majala attack—that the world has learned of it. For his efforts, the journalist, Abdulelah Haider Shaye, was imprisoned by Yemen and kept in a torture dungeon upon the personal request of President Obama himself.

JSOC, which functions as a kind of paramilitary arm of the White House, was responsible for both attacks.

Then there is the drone killing of the US citizen Anwar al-Awlaki. Since due process does not exist on the battlefield, now defined to encompass much of the globe, Awlaki was never charged with a crime. Nor is there publicly available evidence to indicate that he was guilty of much beyond posing a political threat to the United States, owing to the internet following his speeches had attracted.

Shortly after he was killed, a US drone executed his innocent son. His family provides video and photos of the boy’s childhood, and of the sweet-looking 16-year-old he had become before his untimely death. The circumstances leading to his murder remain opaque.

In Somalia, where Washington’s extrajudicial lethality has also been active, the US-backed warlord Mohamed Qanyare provides the money quote of the film: “America knows war. They are war masters. …. They are teachers, great teachers.” It is hard to imagine grimmer tidings for the future of Somalia, where US advisers and CIA agents are hard at work “educating” the Somali government. The past has been bad enough – the legacy of decades of US intervention in Somalia is evident in the rubble and bullet pocked streets of an utterly devastated Mogadishu seen in the film.

Throughout, Dirty Wars conveys a clear impression of the sinister, unaccountable, and deadly power concentrated in the halls of Washington that now threatens the planet. While occupants of the White House have never been particularly concerned by legal restrictions, particularly in international arenas, drones subvert the law entirely, thereby extending extrajudicial warfare to the open skies and raining death upon whomever the president chooses to target from his kill list.

Why does Washington care so little about civilian deaths? Moral concerns aside, the blowback created by such killings would seem to pose a strategic challenge by undermining US popularity in the world. Dirty Wars does not attempt to answer this question. We may speculate, though, that unconstrained power demands absolute control over, and passive obedience from, its subjects—the entire world in this case. The globally extended militarism required to enforce such domination needs a rationale. Creating minor new enemies is therefore hardly the worst outcome from Washington’s perspective.

Steven Fake is co-author of the book The Scramble for Africa: Darfur-Intervention and the USA. He lives in Washington D.C. and can be reached at steven.m.fake@gmail.com. Follow him on Twitter: @StevenFake.