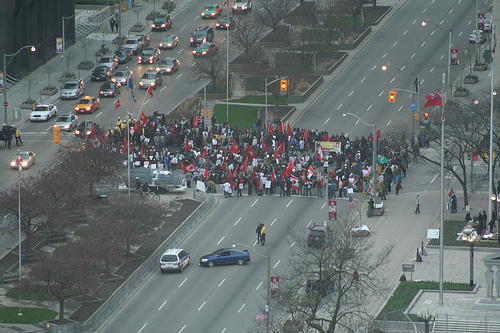 Protests and the Global City

Taking it to the… highways.

Over the last months in Toronto and Montreal, we have experienced the global city as never before.

The Tamil community, about 250,000 strong by some accounts, has been protesting almost continuously since early January to press the Canadian government to act to stop a slaughter of Tamil civilians in the last stages of the civil war in Sri Lanka.

During a life of activism, I have never seen more sustained street actions than we have witnessed in Toronto over the last months. More than half the Tamil community has been out in streets, first as a human chain that snaked along the sidewalks from downtown Union Station to uptown Bloor Street, then thousands in front of the Sri Lankan consulate, then another human chain even longer and bigger. Through all of this action, the only mainstream news coverage was about traffic problems.

So the Tamil community took it the next step and sat down in the street in front of the U.S. consulate for four days. What was amazing about the sit-in, besides the fact that the police allowed them to stay for four days as long as they permitted access for emergency vehicles, was the composition of the sit-in. While second generation youth led the protest, it was older women and children who seemed to form the core. I have never seen so many children involved in a protest, most of them understanding exactly why they were there. The protests have become so continuous that one leader of a local Tamil organization told me that they had become a major focus of social interaction especially for the youth.

The sit-in on University Avenue started to provoke a reaction but mostly it was disgruntled Torontonians complaining about being delayed on their way to work. I was shocked by the open racism I heard when I appeared on a local TV call-in show to defend the protests. But still there was no response from politicians or the government.

Then on Sunday May 10 in a bold action, about two thousands Tamils climbed the on-ramp on to the Gardiner Expressway— one of the busiest highways in Toronto— and sat down blockading traffic for several hours. Reports of a massive slaughter of Tamil civilians had been coming out over the weekend. Frustrated at the silence of the federal government despite the largest demonstrations we have ever seen in this country, and desperate to save the lives of family and friends back home, a group of Tamil activists decided to lead a creative act of civil disobedience.

While drivers returning to the city from a weekend away were no doubt frustrated, finally the Tamil struggle was the lead story of every media outlet in the country. Liberal leader Michael Ignatieff agreed to raise the issue in Parliament and the Tamil peaceably, as they had been throughout all the protests, left the Gardiner Expressway and continued their protest in front of the US consulate— this time on the sidewalk.

There was a ferocious backlash to the occupation of the Gardiner but it got action and mainstream interest in the issues. The Tamil community has been brilliant in its ability to mobilize but less effective in finding allies for their cause. It has taken a while for non-Tamil support to build because of the confusion about the role of the Tamil Tigers. The discourse of the War On Terror has allowed governments like ours to ignore massive slaughter of civilians by oppressive states in the name of fighting terrorism. Moreover the Tamil Tigers have committed atrocities. But whatever our concerns about the Tigers it is critical to separate the human rights issues from the political ones.

The reality of living in a global city has now been driven home to many Canadians. The importance of solidarity with communities living in our city is not only to defend human rights but also to ensure that diverse communities will be there with us in the battles to come in Canada. The Tamil community found out that their true allies are among the social movements and unions in the city— and those movements discovered a new world of activism right on their doorstep.

Judy Rebick is a social justice activist, writer, broadcaster and speaker. She currently holds the Sam Gindin Chair in Social Justice and Democracy at Ryerson University.