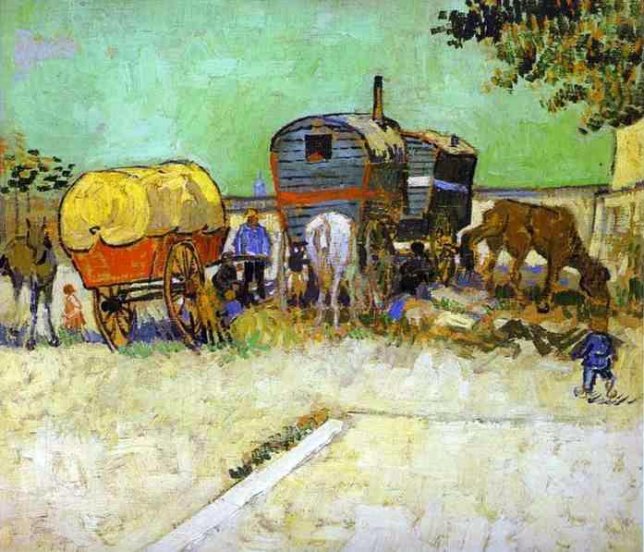 On the Roma Again

During an official visit to the Czech Republic in May, Canadian Prime Minister Stephen Harper warned that the rising number of refugee claimants coming to Canada from that country presented a growing concern for his government. As Immigration Minister Jason Kenney had done a month previously, he hinted that if the Czech government did not investigate the commercial networks allegedly orchestrating and profiting from the flow of claimants, Canada would consider reinstating visa restrictions for Czech citizens visiting Canada. In turn, the outgoing Czech Prime Minister, Mirek Topolánek, blamed Canada’s lax refugee determination system for attracting an influx of— what he characterized as— economic migrants taking advantage of Canadian leniency.

There was nothing particularly remarkable about this diplomatic exchange, except for the effort both sides made to avoid discussing the people at the centre of the surge in migration between the two countries. Although Canada does not document the ethnicity of asylum seekers, it is commonly recognized that the majority of the 1,500 claimants who arrived from the Czech Republic since visa requirements were lifted in 2007 are Roma, members of one of the largest, poorest, and most marginalized minority groups in Europe.

It is not surprising that both Prime Ministers were reluctant to draw attention to the asylum seekers’ ethnicity. For the Czech government, this would raise the question of why so many Roma feel compelled to leave the Czech Republic. For Prime Minister Harper, conceding that the Roma might have a genuine claim to asylum would make the threat of reconsidering visa restrictions with the express purpose of keeping them out difficult to defend. Instead, both sides engaged in a diplomatic deflection in which they depicted the asylum claimants as non-genuine without discussing any uncomfortable evidence to the contrary.

For the Roma, this treatment is nothing new. Historically, marginalization and discrimination have been their lot across Europe and— more recently— in Canada. In 2005, UNICEF reported that 91 per cent of Roma in Hungary were living below the poverty line, along with 84 per cent of those in Bulgaria and 88 per cent in Romania. In April, the European Committee of Social Rights found that Bulgaria was violating the rights of the Roma to access to health care under the European Social Charter. In the Czech Republic, systemic discrimination against Romani children in education manifests itself in the streaming of developmentally healthy Romani children into schools for children with disabilities. Marginalization within the education system leads to virtual exclusion from the formal job market, and the resulting poverty and dependence on menial labour and begging reinforces the societal stereotypes of the Roma that politicians and the media have proven adept at sensationalizing. Perpetuating the cycle of exclusion, poverty and marginalization make it less likely that Romani families will send their children to school.

Political scape-goating and brazen violence against the Roma have escalated in Europe. In Hungary, seven Roma were killed over the past twelve months in firebomb and gun attacks on their settlements, and in November 2008 Czech police in Litvinov restrained a 500-strong mob set to attack a Romani community. Anti-Roma discrimination and violence is not confined to Central and Eastern Europe, which offers some explanation as to why Roma who feel compelled to (and can afford to) leave the Czech Republic venture as far as Canada. The Roma in Western European states are frequently blamed by the media, politicians, and the public for rises in petty and violent crime. A Roma encampment in Naples was the target of firebombings and violent riots in May 2008; many of the targeted residents were later deported. That year, the Italian authorities began fingerprinting members of the Roma community— including children— in an ostensible anti-crime measure that a European Parliament resolution described as “an act of discrimination based on race and ethnic origin.”

If history is anything to go by, there is little cause for optimism for those Roma hoping to come to Canada either. In 1997, the Canadian government reinstated visa restrictions on the Czech Republic only a year after removing them— in response to the arrival of more than 1,500 Romani refugee claimants. Canadian politicians depicted the influx as a threat to public safety. This move was followed by governmental attempts to influence the decisions of the Immigration and Refugee Board (IRB) in relation to Roma from Hungary— the Federal Court of Appeals subsequently ruled this as illegal. These attempts to keep the Roma out of Canada occurred despite the fact that the IRB had approved nearly 100 per cent of Czech-Roma asylum claims in 1996 and over 90 per cent the following year.

The IRB defines a refugee as someone who has left their home country due to a well-founded fear of persecution based on race, religion, nationality, political opinion, or membership in a particular social group. The Board has consistently determined that Romani asylum seekers from the Czech Republic fit this description: of the 89 applications from asylum seekers originating from the Czech Republic that it processed in 2008, the Board accepted 84 (5 claims were rejected, 11 abandoned, and 95 withdrawn).

Canada’s asylum system is not without its flaws. Asylum seekers who withdraw or abandon their applications and subsequently stay on in Canada warrant attention, and any operators who profit from genuine or trumped-up asylum claims are similarly a cause for concern. There is also an argument to be made that it is not the Canadian government’s responsibility, nor is it in its interest, to speak out on behalf of national minorities everywhere. Still, there is a big leap from acknowledging flaws or staying silent to closing the door on individuals based on an arbitrary assessment of their group’s claims as inauthentic— especially when the national refugee determination body clearly disagrees.

The Canadian government is aiming to stem the flow of Romani asylum seekers by questioning their legitimacy at a time when the country’s refugee determination system is lending credence to their claims. This is both contradictory and potentially counterproductive, as shutting down legal channels for refugees often leads to a rise in illegal migration among those determined to flee their country. Most worryingly, a closed-door policy will perpetuate a cycle of systemic violence against the Roma in which they are blamed for the discrimination they face with alarming and escalating frequency.

Marie-Adele Cassola is on the editorial board of Alternatives International Journal.