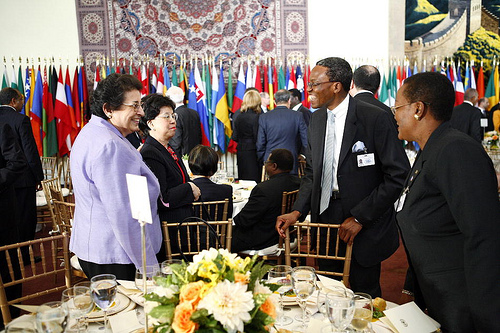 A renewed commitment for the Non-Aligned Movement

The article entitled "The Non-Aligned Movement: Renewed Relevance in a Time of Crisis" published by the agency Share the world’s resources discusses the July 15, 2009 Summit held in Sharm El-Sheik in Egypt that reunited the member countries of Non-Aligned Movement (NAM) . This Summit, attended by more than fifty heads of state and government (out of a total of 118 members), was held under the theme "International Solidarity for Peace and Development". In this article, the author Rajesh Makwana, discusses the relevance of the NAM by making a quick review of the highlights of last summer’s meeting. Makwana’s article denotes the NAM’s high level of relevance in terms of international relations and its implication in the international arena.

A voice in the international arena

Briefly, the Non-Aligned Movement (NAM) is an international organisation of States that originally considered themselves not formally aligned with, or against, any major power. The movement emerged in 1961 in Belgrade in the context of the Cold War and the rivalry between the USA and the USSR. The purpose of the organisation, as stated in the Havana Declaration of 1979, was to ensure "the national independence, sovereignty, territorial integrity and security of non-aligned countries" in their "struggle against imperialism, colonialism, neo-colonialism, racism, and all forms of foreign aggression, occupation, domination, interference or hegemony as well as against great power and bloc politics."

As stated by Makwana, also executive director of Share the world’s resources, the NAM represents nearly two-thirds of the Nation’s members and comprises 55% of the world population, particularly countries considered to be developing or part of the third world. Issues that it faces are noteworthy because the NAM is one of the few institutions that unites developing countries and serves as a formal channel of information in their name. In essence, the organisation is a vehicle by which developing countries may push forward their point of view not only on issues that affect themselves but also for issues on a global scale. As Makwana says, certain founding countries such as India and South Africa are gaining greater demographic and economic importance, providing further reason for their opinions to be voiced and heard by the international community. The NAM’s importance in international politics lies in the fact that it was created in order to counterbalance certain international forces and to voice the opinion of those with less clout in the international arena. In other words, one of the main goals of the founding countries was to obtain a voice at international affairs meetings. As such, this organisation’s current agenda is noteworthy from an international point of view.

What exactly is at stake with the NAM and why is it the center of such a controversy in the international arena nowadays ? “Nearly 55 years after its creation, the international situation has evolved”, says Makwana. The Movement was created on the basis of the rejection of a bipolar world and on an ideology based on the rivalry of the Cold War. This situation is obviously no longer a concern today. Second, and as stated in his article, Makwana argues that most of the Movement’s Summits have also suffered from a lack of exposure by the mainstream medias. Consequently, some say it is going through a deep crisis and is struggling to establish guidance for all its members, who are divided on many subjects. The question many are asking today is: “Does the Movement of the Non-Aligned still has a place or has it become a kind of relic, simply anachronistic in today’s international context?”

It seems to be agreed that, for several years, the Non-Aligned Movement (the NAM) has had difficulty attracting attention, especially the Western media. Its meetings and its work definitively has not attracted the same audience as large organizations like the UN, NATO or even the ASEAN. Nevertheless, as Makwana argues, the NAM still remains a “key political voice of the developing countries”. In an era of political and economic turmoil (financial crises, global warming, wars), the NAM offers an alternative way of looking at international issues for which the efforts made by large IGO’s like the G8 and G20 have somehow proven to be useless. For example, at the Shar-El-Sheik Summit, it was stressed that the financial crisis and global economic conditions require a new commitment by the international community to uphold the principles of international law and an additional effort of cooperation between developing countries and developed countries.

The NAM has also showed recently that it had the capacity to adapt to the new international situation and actualize its subjects of concern. Among other topics, the future of the movement, the UN reform, the North-South dialogue, terrorism, human rights and finally, the Arab-Israeli conflict were also discussed at the meeting in Sharm El-Sheikh. The final document of this summer’s Summit stated that the NAM should “expand and deepen its interaction and cooperation with parliamentarians, civil society, including non-governmental organisations, and the private sector of Non-Aligned Countries”. Hence, the NAM tries constantly to reform and improve itself and by doing so, proves that it is not only an organisation that belongs to the past.