A History of Violence

The Tamil Tigers are gone, but ethnic struggle remains

The Liberation Tigers of Tamil Eelam (LTTE) were a fearsome force that controlled a third of Sri Lanka at their peak. They ran a de facto state with their own air force, navy, and infantry. In their final days, they collapsed like a pack of cards after holding out for twenty-six years. The Tamil Tigers may be finished, but the ethnic conflict that created them has yet to be resolved. 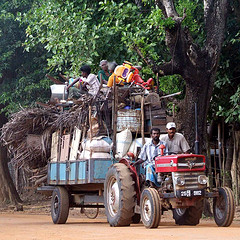 The roots of Sri Lanka’s problems go back to the British colonization of the island in 1796. Sri Lankan Tamils had already been living in the north and east for centuries. With the arrival of the British, more Tamils were brought from the Indian mainland as indentured labourers to work on tea plantations in Sri Lanka’s central hill country.

By the time Sri Lanka achieved independence in 1948, the Sinhalese population, although a majority, was feeling threatened by the disproportionate presence of Tamils in their government services and their economic staple, tea-growing. Independence coincided with a spurt of nationalism among the Sinhalese, who in turning back to their Buddhist roots and Sinhala language, sidelined the Tamils, who speak their own Tamil language and are predominantly Hindu with sizeable Christian and Muslim minorities.

Three actions contributed to the marginalization of the Tamils in Sri Lanka: the repatriation of Tamil tea plantation workers to India in 1949; the Sinhala Only Act passed in 1956, which drove Tamils from the civil service; and the 1963 policy to admit to universities Sinhalese students with lower marks than their Tamil counterparts.

The early struggle for Tamil rights was non-violent, but it had little effect on government policies. Besides the LTTE, an alphabet soup of militant groups sprang out of disaffected youth: TELO, TULF, EROS, PLOTE, etc. Along the way, these other groups either disbanded or went on to join the government. The Tamil Tigers themselves eliminated some that they perceived as rivals.

In 1983, the Tigers attacked a military convoy in the north, killing thirteen Sinhalese soldiers. In retaliation, indiscriminate violence was unleashed against Tamils living in Sri Lanka’s capital, Colombo, in the Black July episode. This triggered the war that would span a quarter of a century. The then-Prime Minister of India, Indira Gandhi, took an active interest in the fate of Sri Lankan Tamils after the July riots and offered training and support to the Tamil militants. She saw a strategic Indian interest in the ethnic conflict— staving off the Americans from flanking India in the north in Pakistan and in the south in Sri Lanka.

After her assassination in 1984, her son Rajiv Gandhi came to power. On his watch, in 1987, a peace accord was signed between the LTTE and the Sri Lankan government; the Tigers would govern provincial councils in the north and east, and the Indian government would send a peacekeeping force to ensure the security of the Tamil people while the Tigers disarmed. Never completely trusting the Sri Lankan government, the Tamil Tigers were loath to give up their arms. This led to tensions with the Indian Peace Keeping Force that escalated into a full-blown war.

In 1989, the newly elected Sri Lankan president, Ranasinghe Premadasa, thinking that the presence of a foreign army challenged Sri Lanka’s sovereignty, clandestinely armed the Tigers to fight the Indian Peace Keeping Force. Facing mounting losses, Rajiv Gandhi called back his troops. The Indian intervention had, however, helped the Tamil Tigers to gain control of territory in the north and east that they one day wanted to make their independent homeland, Tamil Eelam.

If there was one act that would haunt the Tamil Tigers to the end, it was Rajiv Gandhi’s assassination in 1991; it got them banned in India, hitherto their backroom for arms supplies, training, and organization. India, whose army got Bangladesh its independence from Pakistan, has since refused to intervene directly in the conflict.

The Tamil Tigers in recent years have expressed regret for the Rajiv Gandhi assassination. Anton Balasingham, the LTTE’s late spokesman, told an Indian television channel in 2006: "As far as that event is concerned, I would say it is a great tragedy, a monumental historical tragedy, which we deeply regret." Before alienating India, the Tamil Tigers had embarked on another badly conceived action that would eventually weaken them. In 1990 they expelled all the Muslims living in the north of the island over accusations of spying for the Sri Lankan government. The Muslims of Sri Lanka make up about 8-10 percent of the population. They speak Tamil. They traditionally lived in Tamil areas and fought alongside the Tamils for a homeland. In 2002, the Tamil Tigers apologized and invited them back, but the damage was done. The Muslims never trusted them again and have since formed their own political groups, pressing for their own set of rights.

A permanent ceasefire, brokered by Norway in 2002, was signed between the Sri Lankan government and the LTTE. The ceasefire was meant to be a first step in exploring a federal solution to the problem. However divisions within the ranks split the Tamil Tigers into two factions during the ceasefire. The Eastern leader, Karuna Amman, broke away with his followers to the government side, which resulted in the Tigers accusing the government of using the breakaway faction to wage a shadow war.

The Tamil Tigers also complained of a clause in the ceasefire agreement that gave the government, as a state party, the right to protect national security. As a non-state party, when the Tigers killed it was terrorism, but when the government killed, it was national security. In addition, September 11 2001 helped the Sri Lankan government to get the Tamil Tigers listed as a terrorist group in the European Union and Canada— their largest diaspora support bases.

As a form of protest in the 2005 general elections, the Tamil Tigers forbade anyone living in their territory to vote. But for the boycott, almost all Tamils would have voted for Mahinda Rajapakse’s more moderate opponent, Ranil Wickremasinghe. A more moderate president might have steered away from war.

Rajapakse took a hard line. While the Tigers used the Tamil diaspora to lobby— in vain— the Western nations that had banned them, Rajapakse cobbled together a formidable all-Eastern bloc: China and Russia provided weapons and diplomatic support on the Security Council; Iran, money; Pakistan, training. India has also been accused of providing covert support in what has been called a war without witnesses— journalists, and even international agencies, were not allowed into the war zone. Though the military battle has been won, a war of words rages on. The Sri Lankan government boasts that it has wiped out terrorism, but the diaspora cry genocide. Surviving Sri Lankan civilians from the war zone may offer some insight into what really happened, but they have remained silent thus far in tightly controlled government-run displacement camps. Rajapakse’s address to Sri Lankan parliament suggests that he wants to keep out foreign players in dealing with the Tamil issue, “We must find a home-grown solution to this conflict.” But there are no indications from the government of any concrete plans in this regard. The leader of Sri Lanka’s Tamil National Alliance party, MP Rajavarothiam Sampanthan, noted that Rajapakse’s speech outlined “no vision [of] a political solution.”

Nachammai Raman is a freelance journalist.