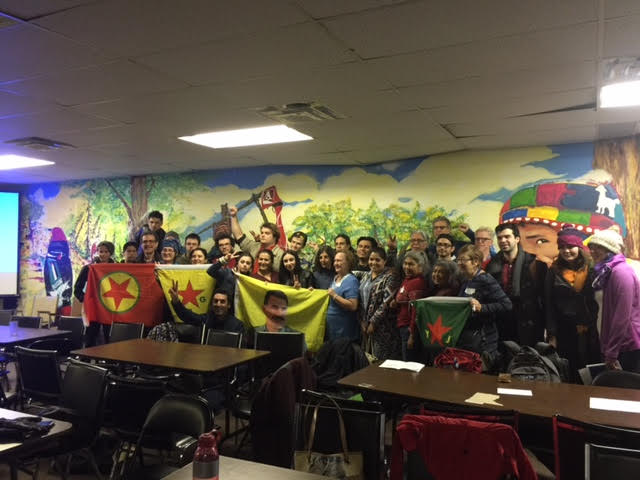 On Tuesday, November 1st 2016, World Kobane Day, activists and allies of the inspiring social movements in Rojava (the northern region of Syria) gathered in a large number of cities across the world. We in Montreal also chose to express our unfailing solidarity and admiration, not only for the Kurdish cause, but for all the peoples of this region who are struggling to exercise their local sovereignty by means of the principles of direct democracy, social justice, feminism, ethnic and religious harmony and ecology.

We do this because this people’s movement embodies a flame of humanist hope shining in the midst of the obscurantism of the so-called Islamic State. We do this because this flame could be quickly extinguished by the nauseating breath of the Turkish State, or between the fingers of the great imperialist powers. For these reasons, it was important to meet and to express our solidarity and also to provide an opportunity for Montreal groups to learn about the struggle.

We in Montreal who are allies of Rojava do not make the error of compartmentalising various struggles according to their geographic zones or their protagonists; we believe that all of our different struggles are part of one movement to build a better world. It is in this sense that our event of international solidarity naturally took the form of a convergence assembly. The assembly, organised in the evening in the Alternatives building on Ave du Parc, comprised about fifty people belonging to 22 different organisations:

We came to a consensus on the need for struggle, of collective organisation, and of education as a means for attaining a social project in accordance with these values.

In the assembly, everyone was welcome to speak, which participants to exchange perspectives and share about their particular struggles and initiatives, which are diverse but clearly convergent and in parallel with the Kurdish struggle.

What is clear is the political coherence of carrying out parallel struggles for more local sovereignty in several places around the world (such as the region of Rojava in Syria, the First Nations struggles in Canada, the Chiapas in Mexico, and the province Jujuy in Argentina). All of these movements are supported by indigenous populations. This should remind us that the cultural and ethnic homogenisation of populations by force is at the heart of our criticism of the nation-state, of its borders, and of the colonial phenomenon that defined them. We reaffirm with the greatest vigour the inalienable right of all peoples to self-determination!

The assembly was in broad agreement concerning the idea that the free self-determination of a people invariably depends on its capacity to refuse sexist oppression in its midst. This implies the firmest rejection of capitalist objectification of women, as well as the total refusal of traditional patriarchy. Indeed, we must place women’s struggles at the heart of our struggles if we want to build a better world.

The assembly concluded with exchange of contacts and the will to launch a Montreal network of solidarity with the people of Rojava and the Kurdish struggle in order to both express our solidarity together and also to better educate and share about this struggle in Montreal civil society. It is necessary at present that we remain mobilized in order to make these exchanges bear fruit, and to organize ourselves into a lasting and coherent convergence of struggles.