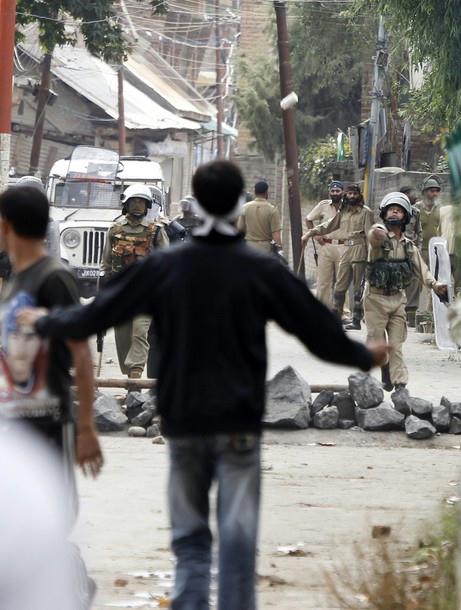 The New Abnormal In Kashmir

Continued repression is likely to intensify the alienation in Kashmir. It would be much wiser for the government to realise the futility of stonewalling and initiate unconditional talks with all concerned

Sixteen years is a long time to do something about a situation that causes immense suffering to millions of innocent people. But when I returned to Kashmir last month, after a gap of 16 years, I found that people’s agony and anger had — if anything — intensified.

As in 2000, I found an intense popular aspiration for azadi (freedom). The Indian Army is perceived, almost unanimously, as an occupying force, and people are fed up with the controls, crackdowns, searches, arrests, beatings, torture and pellet guns. The most common graffiti found around the towns and villages of Kashmir is “Go India, go back”.

The latest expression of this anger is the popular uprising that has rocked Kashmir during the last few months. The Indian media commonly refers to it as a “shutdown”, an ambiguous term that fails to clarify who is shutting what. This so-called shutdown is actually a general strike (hartal). Ever since Hizbul Mujahideen ‘commander’ Burhan Wani was killed in early July, shops have been closed in Kashmir, traffic has been halted, and schools have been deserted. There have been thoughtful exemptions from the strike, say for street vendors, chemist shops and specific times of the week. Some public services, notably health care and the public distribution system, were not only allowed but encouraged to keep going. For the rest, the strike has brought public life to a halt for months on end. That, at any rate, was the situation until I visited Kashmir in late October.

So far as I can tell from many discussions with students, farmers, workers, businessmen, intellectuals and others over a whole week, the strike has overwhelming popular support. It is difficult, of course, to believe that public life can be paralysed to this extent without an element of coercion or pressure. Sometimes the pressure is explicit: anyone who drove a car in Kashmir (outside privileged areas of Srinagar) during the last few months ran the risk of a broken windscreen. But this traffic control was not the work of armed squads or antisocial goons. It was the job of local residents and youngsters who support the strike. In any strike, there is a difficult question of how to deal with potential strike-breakers and free-riders.

Protest calendar for the people

Along with the strike, a series of protests took place all over Kashmir during this period. A “protest calendar” was issued every week (with varying effect) by Hurriyat leaders, who seem to have wide popular support. Examples of suggested protests include occupying the roads, freedom marches to the district headquarters, converging to the United Nations office in Srinagar, performing namaz (prayers) on the road, sit-ins in various locations, visiting those injured by pellet guns, boycotting government offices, reading collective pledges, wall painting, playing resistance songs or music, sending letters to the armed forces, holding conventions on the right to self-determination, displaying banners and placards saying ‘We Want Freedom’, and more. To my knowledge, there are no calls to stone-pelting in the calendars, though it is perhaps taken as read that protests in Kashmir often end up with stone-pelting for one reason or another.

The spirit of these protest calendars was well expressed by Hurriyat leader Mirwaiz Umar Farooq in a “preface” published on August 24 in Greater Kashmir: “As a war has been waged against us by a mighty force, our only means of resistance against the oppression is peaceful protest. The space for that is also highly constricted. Yet individually and collectively we have to find ways and means of registering our protest. The protest calendar is our collective voice. Each one of us especially our intelligentsia, artists, poets, writers, painters have to come forward and use their skills and creativity to express our pain and sentiment. Every Kashmiri’s contribution to the movement counts.”

So-called “anti-India” protests, however, are effectively banned in Kashmir, no matter how peaceful they may be. The authorities have sweeping powers to prevent protests, not only under the Armed Forces (Special Powers) Act, but also under Jammu and Kashmir’s draconian Public Safety Act. Section 144 of the Criminal Procedure Code, prohibiting assemblies of more than four persons (an old tactic of the British Raj to prevent nationalist protests), is in force throughout the Valley. Assemblies, marches, graffiti, pamphlets, even silent vigils — all these are banned if there is any trace of a demand for freedom.

Further restrictions on civil liberties ensure that this state of affairs goes unchallenged. Student politics is banned. International human rights organisations such as Amnesty International and the United Nations Human Rights Council are not allowed to visit Kashmir. Local human rights activists are also on a short leash — the arbitrary detention of Khurram Parvez during the last two months is the latest warning that they should not go too far. Similarly, when Kashmir Reader (one of Kashmir’s leading dailies) was banned on September 30, other media outfits “got the message”, to quote a prominent Kashmiri editor. Kashmir, in short, has been turned into a kind of open jail.

In an insightful article (“Address the ‘new normal’ in Kashmir”, The Hindu, October 10), former National Security Adviser M.K. Narayanan candidly acknowledged that the current unrest in Kashmir is a “home-grown” popular uprising which cannot be blamed on Pakistan or outsiders. He did not comment, however, on the “new abnormal” that accompanies this uprising — an extreme suppression of civil liberties.

When all forms of dissent are banned, the line between peaceful protest and armed resistance becomes blurred. The main difference, it may appear, is that violent deeds receive more attention. Everyone in India has heard of stone-pelting, but daily acts of peaceful protest — or attempted protest — in Kashmir have been ignored.

The refusal to engage

Today, the towns and villages of Kashmir are peppered with “Burhan Wani chowks”, often marked with slogans such as ‘Burhan Wani is in our heart’ and ‘We are all Burhan Wani’. Those who remember Burhan are not hot-headed guerrillas — they are ordinary people who aspire to a peaceful life. If they admire him, it is not because he killed anyone (quite likely, he never did), but because he gave his life, at a tender age, for the freedom struggle. It is for the same reason that we remember and admire Bhagat Singh. Gandhi himself urged us to “bow to them [Bhagat Singh and his associates] for their heroism”, even as he criticised their acts.

There is, possibly, an insightful paradox in the fact that it took the death of an armed militant to spark a largely non-violent uprising across the Kashmir Valley. Many people proudly told me that the strike would continue “to the finish”. Yet they realised that azadi may not come any time soon. Thus, they often added that other uprisings would happen if need be. Indeed, it is not the first one — similar events happened in 2010.

The response of the Indian government to this uprising is to stonewall: refuse any concessions (even just a ban on pellet guns), arrest the leaders (Syed Ali Shah Geelani, Mirwaiz Umar Farooq, Yasin Malik, the lot), and wait for people to lose hope. This strategy, however, perpetuates the repression, and every act of repression intensifies the yearning for freedom in Kashmir. Nothing unites people like shared persecution.

If the current policy of inflexible suppression of the freedom movement persists, the brutality will continue for decades. Continued repression is likely to intensify the alienation of the Kashmiri people from India, and could also foster a revival of armed resistance in Kashmir and beyond. It would be much wiser to realise the futility of stonewalling, and initiate unconditional talks with all concerned. Atal Bihari Vajpayee (then Prime Minister of India) had taken significant steps in that direction, and seems to be remembered for it in Kashmir. Today, however, the iron fist is back.

The conformist nature of public opinion in India, when it comes to Kashmir, does not help matters. It is hard to understand how opposition parties, civil society and social movements have remained silent on Kashmir for so long. There have been no major demonstrations of solidarity with the people of Kashmir anywhere in India during the last few months. Even public discussions of the situation in Kashmir are extremely rare in India. As veteran journalist Kuldip Nayar observed many years ago, “When it comes to Kashmir, the conscience of most in the country becomes dead.” If anything, the situation is worse today, as the Indian media further dull our conscience with a barrage of distorted accounts of the situation in Kashmir. The new abnormal threatens to engulf us all.

Jean Drèze is a Visiting Professor at the Department of Economics, Ranchi University.