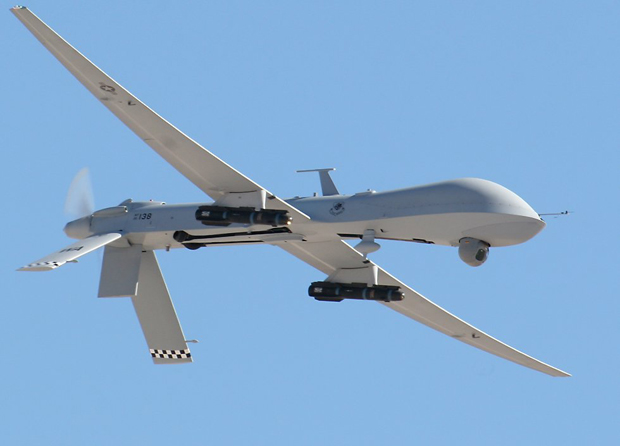 A proposed Canadian Mission Sequence of Events takes readers through the log of a drone mission, with demonstrators referred to as “moving targets” and drones employed to “assist ground security forces [to] control a crowd of protestors.” Later on, the drone crew works with a security team and “vectors them to the area where they spot [a] vehicle and intercept it, identify the occupants and ascertain that the individuals were attempting to hang a banner concerning global warming.”

Following a U.S. election campaign dominated by questions of temperament and fitness to carry the nuclear football, the new President will also inherit one of the most troubling but little discussed legacies of the Obama administration. That’s the limitless capacity to assassinate anyone by armed drone, a signature policy of the past 8 years resulting in thousands of casualties in Africa, Asia, and the Middle East.

“We now have this very significant bureaucratic and legal infrastructure to support targeted killing, and there’s virtually no oversight by Congress or the courts of the lawfulness of these strikes,” says Jameel Jaffer, the Kingston-born human rights lawyer who, following a clerkship with Supreme Court Justice Beverley McLachlin, has spent the past 15 years on the front lines of U.S. court battles challenging war on terror practices from indefinite detention and warrantless wiretapping to torture and untold layers of government secrecy.

“Once you accept the concept that the battlefield is borderless and war powers can be used anywhere, you open up [the potential for] all sorts of abuses,” says Jaffer, who will deliver the 11th Annual Eva Holtby Lecture on Contemporary Culture at the Royal Ontario Museum on November 15 and sign copies of his new book, The Drone Memos: Targeted Killing, Secrecy, and the Law. It’s a partially redacted collection of originally top secret memos and documents in which some of the country’s leading lawyers have twisted themselves like pretzels to justify abuses that Jaffer says would have been unthinkable a generation ago.

“When Bush proposed extrajudicial detention [of alleged terror suspects], Americans were quite rightly alarmed and outraged, but when Obama authorized extrajudicial killing, Americans were for the most part indifferent,” Jaffer says, noting part of that may have been due to the amount of faith Americans placed in him following the bleak Bush years.

“But you cannot invest that kind of power in the presidency just because of the person who occupies that spot at a certain point in time, because someone else will eventually occupy that spot. And when they inherit this virtually unchecked power, we have very little idea how they are going to use it, because we don’t know what the world will look like in a few years. Something might happen that makes the resort to this kind of power much more appealing, and so a President may say certain people in Germany or Canada or Spain present a sufficient threat to the US that we need to kill them. At that time there will be no institutional checks against that kind of decision. To me that seems crazy.”

Drone warfare – in which pilots sitting in a Nevada or New York State military bunkers remotely pilot unmanned aerial vehicles armed with real-time video cameras and Hellfire missiles halfway around the globe – is very much part of public discourse, from Hollywood movies to Obama joking about the use of Predators to scare guys wanting to date his daughters. Obama was even quoted as saying “I’m really good at killing people,” but much of the assassination program’s legal schematics remain secret, from why people are targeted to how someone can be defined as an “imminent threat” when they may be on a target list for months at a time.

In 2012, the New York Times reported the calculus for the administration’s claims of extremely low drone strike civilian casualties was based on considering “all military-age males in a strike zone as combatants unless there is explicit intelligence posthumously proving them innocent.”

Jaffer has spent years in the courts trying to force disclosure of the documentation behind those killings, but is frustrated with a judicial system that continues to defer to the administration’s national security confidentiality claims. Similar legal fights may be in store here as the Canadian military pushes for a fleet of its own armed drones, which top soldier General Jonathan Vance touted last March at the Senate Defence Committee. Vance told Senators that he is prioritizing the Joint Unmanned Surveillance and Target Acquisition System (JUSTAS), and earlier this year, Public Works Canada put out a Request for Information to weapons manufacturers hungry for an opportunity to fulfill the program’s mandate, whose parameters appear to engage the very profound legal, political, and moral questions Jaffer tackles in The Drone Memos.

Indeed, the 88-page JUSTAS document lists a number of potential scenarios which appear to share the Obama administration’s shady targeted killings rationale. The program envisions a hypothetical “Expeditionary ISR/Strike Scenario” with Canadian Forces in Afghanistan performing reconnaissance for a coalition convoy, during which their drone pilots conduct “Pattern of Life Assessments” as they look for “High-Payoff Targets” on the approved “Joint Prioritized Target List” (echoing the Kill List updated at Obama’s infamous “Terror Tuesday” meetings). As part of a proposed mission sequence, the pilot crew spots 3 Fighting Aged Males (FAMs) “standing near a long wall close to the road that the convoy is traveling on,” with one holding a small radio or cell phone. When it appears that “there is a shovel leaning against the wall next to the three FAMs,” and that some nearby dirt seems to have been disturbed, they suddenly become labeled as combatants, and the use of force – in this instance one Hellfire Missile and two 250-lbs GBU 48 laser guided bombs – is authorized.

While it is unclear how those dead FAMs can perhaps prove their innocence posthumously, the consideration of such a scenario raises significant questions about the extent to which Canadian officials will develop a similar targeted killing infrastructure to their American cousins. Given Ottawa’s broad definition of Canadian interests, which now encompasses much of the globe, will that include non-battlefield scenarios, as has become commonplace stateside? And how will extrajudicial executions be justified by Trudeau’s Justice Department’s lawyers?

Equally concerning, drones are an increasingly favoured tool for surveillance and crowd control. The JUSTAS document posits another potential scenario, a Quebec G20 summit where “several groups have openly indicated their intent to protest and intelligence indicates that radical elements may exploit the presence of international media to further their anti-capitalist cause by disrupting the Summit.”

A proposed Mission Sequence of Events takes readers through the log of a drone mission, with demonstrators referred to as “moving targets” and drones employed to “ assist ground security forces [to] control a crowd of protestors.” Later on, the drone crew works with a security team and “vectors them to the area where they spot [a] vehicle and intercept it, identify the occupants and ascertain that the individuals were attempting to hang a banner concerning global warming.”

As Defence Minister Harjit Sajjan considers the best bang for his military buck, drone manufacturers argue their products are far cheaper than fighter jets. Jaffer, meanwhile, says that as militarized drone use appears on the Canadian horizon, “the public ought to know what the government is doing, and they should be able to assess how the use of this kind of violence is likely to change both the society in which the violence is used and the society that authorizes the use of it.”