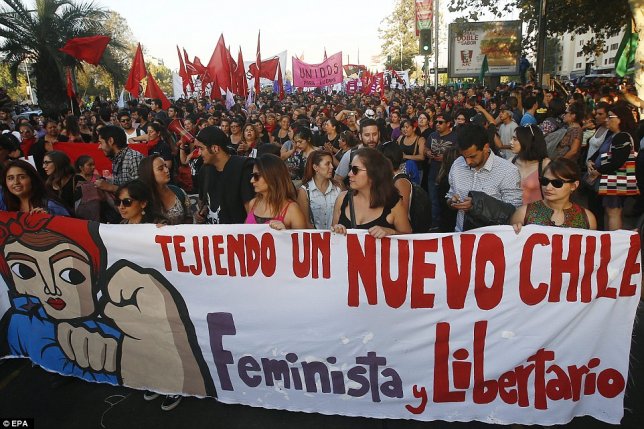 Less than a week before International Women’s Day a year ago, Honduran military men trained by the Pentagon burst into her home and assassinated Berta Caceres. Feminist, environmentalist, and anti-imperialist, a charismatic organizer and a staunch opponent of the megaprojects that stole the land and poisoned the earth of indigenous peoples, Berta was the epitome of everything the henchmen of capitalism loathed and feared.

Berta Caceres pioneered a new generation of women leaders in Latin America. These new leaders live the ‘intersectionality’ between class, race and gender not as lines that crisscross, but in each breath they take. Berta’s leadership was recognized worldwide for how she emphasized uniting struggles. She passed on to her children and members of her organization COPINH the Lenca indigenous worldview and conviction that Mother Earth must be protected, an anti-capitalist and anti-imperialist analysis that provides a framework to understand the attacks on her land and people by linking them to the national and global context, and a firm belief in the power of international solidarity to confront an international system. She insisted that environmental activism means standing up to patriarchal forces that destroy the planet, and that defense of territory is defense of women’s rights because patriarchy claims woman’s bodies as its territory.

This way of viewing feminism as an integral part of the battle for survival as a people, as a species, as women has given new life to feminism at a time when the second wave of mostly white, middle to upper-class feminists seems to have crashed on the shoals of neoliberalism. These women-led battles, not just in Latin America but throughout the Global South, provide the vitality and diversity and relevance that feminism needs to take a permanent and prominent place in every freedom movement on earth.

Lolita Chávez Ixcaquic, a Maya K’iche leader in Guatemala, refers to ‘the other feminisms that are arising among the women of indigenous peoples’. ‘We talk about the autonomy of our peoples,’ she says, and also the need for autonomy within autonomy. ‘Because in my community there is a patriarchy, and sometimes it’s worse than other barriers because it’s so intimate.’

Being on the front line in anti-capitalist battles to defend land and rights catapults women across the region into leadership and forges new definitions. This transformation in the women themselves and in the role and practice of feminism is key to the future, and purposely overlooked by liberal feminism.

The women and their movements

There’s no single way to characterize new feminisms in Latin America, but most begin with two basic elements: victims who refuse to be victims and upholding the value of life. That sounds basic, but itís the most fundamental and radical challenge to the system today, and a dangerous one that has led to assassinations and constant attacks on women leaders. Indigenous women are at the heart of this challenge because they suffer the triple discrimination of being poor, indigenous and women, but also because deep indigenous values of connection confront the individualism and consumer culture that time after time have absorbed U.S. and European feminism.

Those connections fuel Mayan women’s organizing. ‘We get strength from many principles, among them reciprocity you are me and I am you. That strengthens us as women and the connection with life and the network we are all part of,’ Lolita stated in an interview with Just Associates. ‘As part of that web, we have to have territories free of corporations and free of violence against women, to empower us to move toward the full significance of life.’

Garifuna leader Miriam Miranda notes that the emphasis on community means no aspect can be temporarily shelved or ignored. ‘All organized movements, peasants, workers, indigenous peoples, LGTB have to incorporate reclaiming community, communality. Especially the anti-patriarchal struggle, but also anti-racist organizing, because it’s useless to fight for an anti-patriarchal system if we still have racist and discriminatory acts against people who are not like us.’ As a Black indigenous feminist, she and her organization on the Atlantic coast of Honduras collectively take on all at once, every single day.

Simply defending life in a system that kills has generated new women-led movements never envisioned just a decade ago. In Mexico, thousands of women have organized to search for children and other loved ones disappeared in the nation’s disastrous ‘war on drugs’. In local groups across the country, women, and to a lesser degree men, got together and began by spending countless hours in government offices pressing officials for serious investigations, prosecutions and information on their cases. They usually got nowhere. Now demands on the government continue, but many have turned to going out into the fields with sticks and shovels to search themselves, building grassroots alliances for autonomous action. From the pain of losing a child, they’ve learned to defend rights, file grievances, speak in public, and lead movements. Many might not call themselves feminists, but they recognize real changes in their roles.

‘I used to be a housewife, but after August 28, 2008 I was totally thrown off track, because [the disappearance of my sons] was a drastic life change,’ Maria Herrera, leader of nationwide organization of family members of the disappeared, said in a recent interview.

‘It changes your life completely, but fortunately these changes that came about so tragically have also made us understand that as people, as women, we can’t be defeated. The pain that I’m suffering, and not just me, but thousands of women mothers wives daughters far from scaring us away, has given us the courage and the strength to fight back and move forward.’ Maria Herrera has become an internationally known critic of the drug war and the Mexican government, bringing thousands into a movement for profound social change. Women have taken on all the cases of the disappeared as their own and risked their lives going up against organized crime and corrupt government officials.

The Central American Mothers who travel through Mexico searching for missing migrants each year go through the same transformation from the private sphere to the public sphere, from individual grief to shared outrage and action. When I asked why women are more likely than men to organize, a founder of one of the groups replied that a mother will risk her own life to find a son or daughter and never gives up hope. Fathers feel they’ve failed to protect and tend to withdraw to shelter those who remain. So traditional patriarchal roles push women into breaking out of those same roles not the first time in the history of feminism we’ve seen that paradox.

Throughout the region, millions of women worldwide took part in the 2017 March 8 Women’s Strike against macho violence, by either refusing to work, to buy, to engage in sexual relations, to attend school or by going to demonstrations. The idea for the global mobilization began in Argentina with the ‘Ni Una Menos’ (not one less) marches following the brutal rape and murder of a young woman, and with the Ni Una Más (not one more) demonstrations against femicide in Mexico. Young women outraged by the lack of security and the sexist aggression in their societies turned out in events that bypassed traditional feminist organizations and marked a new generation of feminist activism.

Argentineans marched with a slogan that translates roughly as ‘For the Missing’. The communiqué states: We’re missing the women political prisoners, the persecuted, the assassinated in Latin America for defending our land and resources. We’re missing women in prison for minor offenses that criminalize forms of surviving, while corporate crimes and drug trafficking go unpunished because they benefit capital. We’re missing the dead and those imprisoned for unsafe abortions. We’re missing the disappeared.’

This isn’t just a laundry list of victims; it’s the new constellation of feminist issues.

Shortly after Trump’s election, the New York Times ran an op-ed entitled: ‘Feminism Lost: Now What?’ The article argued that when Hillary Clinton’s campaign went down in flames it marked a major defeat for feminism the destruction of the dream of inaugurating the nation’s first woman president and shattering the glass ceiling. Not only that, anti-feminism in its rudest and most blatant expression in decades won, helped not in small part by white women’s vote.

There’s been some soul-searching, beyond the post-electoral post-mortems, on what went wrong, but the real question is: What feminism are they talking about? Hillary Clinton popularized the phrase ‘Women’s rights are human rights’, ushering in a paradigm shift toward mainstreaming women’s issues. That’s exactly the problem. Latin American feminisms are very clear that they’ll never get where they want to be by giving the current system a gender makeover.

Clinton stood for the kind of patriarchal militarism, intervention and corporate privilege that sustains the same system other feminisms are determined to defeat. In her autobiography, she wrote openly about maneuvering with Mexican Foreign Relations Secretary Patricia Espinosa to keep the Honduran coup regime in charge. As she worked behind the scenes to institutionalize the coup without bringing back the elected president, Mel Zelaya, Honduran ‘Feminists in resistance’ marched in the streets daily as a pillar of the pro-democracy movement. Cáceres cited Clinton’s statement often to show the central role of the U.S. government in perpetuating the coup d’état in Honduras. She later became a victim of the coup legacy.

The NYT op-ed concludes, ‘The challenge for the women’s movement is to persuade more of the electorate that feminism is not merely a luxury for the privileged or the province only of liberals.’ Even the phrasing is condescending. It’s not about persuading people to vote feminist. And it’s high time to examine the implicit concepts of who does the persuading and who are the potential persuaded.

For feminism to become the emancipative movement it was meant to be, the roles have to be reversed. It’s not about consciousness-raising any more, as if the veil must just be stripped from the eyes of those who fail to see things the way we see them. It’s about creating the spaces for dialogue without imposition that recognize class and other differences and allow for new understandings and new models to emerge. That doesn’t mean accommodating or justifying the virulent sexism and racism that became acceptable in US political discourse with this election, but it does mean forging new paths that provide a way out that isn’t based on hatred and division, or privilege and repression.

It’s about giving the lead to the new feminisms that are developing out of head-on opposition to the global system from the women whose very lives are a testimony to how oppressions fit together and resistance is emancipation. U.S. feminism’s bad rap exists because a phony feminism has comfortably installed itself within the system and seeks to hold back the new feminisms that challenge its privilege.

Feminism will never defeat the Trump patriarchal revival in the U.S. or the resurgence in the rest of the world unless it embraces its nature as profoundly anti-systemic. As the system becomes more deadly and alienating, women’s defense of life and their stands against impunity present a radical challenge. Whether the new feminisms call themselves feminist or not, their anti-systemic actions directly confront patriarchal violence institutionalized in the state and expressed in society on every level from the homes, to the streets, to the legislatures.

Feminists everywhere should be joining these challenges.

This article was originally posted on CounterPunch