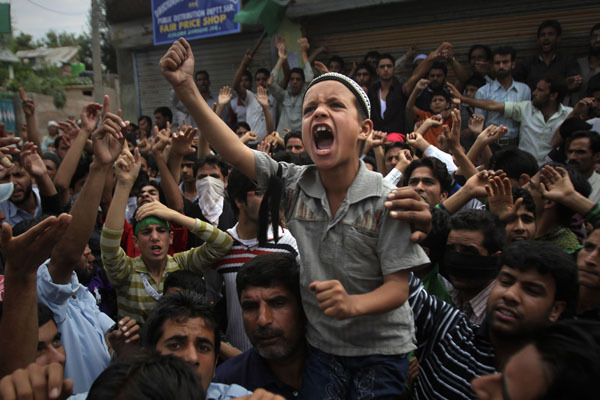 In 2003 I interviewed the late Amanullah Khan, founder of the nationalist organization Jammu and Kashmir Liberation Front, for our documentary “Crossing the Lines – Kashmir, Pakistan, India”. It remains the only one made in Pakistan that looks at the problem objectively. When asked what path Kashmiris should take, Khan’s reply – captured on video – was unhesitating: Kashmir needs people’s struggle, not terrorism. “The so-called mujahideen have damaged our cause immensely”.

Khan had concluded after a long history of struggle that the linkage of terrorism with Kashmiri nationalism had both hardened Delhi’s attitude and reduced international sympathy. He now advocated “people’s struggle”. But what does people’s struggle mean in an epoch of retina destroying pellet guns, fierce religious radicalization of both Hindus and Muslims, and soaring India-Pakistan hostility under a nuclear overhang? Is any solution to Kashmir possible in these circumstances?

Let’s take a short retreat into mathematics. Some equations have solutions, achievable after some finite amount of effort. Others, with the help of rigorous logic and provable theorems, can be shown to have no solution and so no amount of trying will ever work in this case. There is still a third type: that where solutions are possible but only under specific conditions.

Kashmir can be excluded from the first category. Everything has been tried by those jockeying to control it. Resistance and repression have varied from moderate to severe, Kashmiri political parties have been infiltrated by agents of Delhi or Islamabad, and subversion and terrorism – within and outside borders – are used with impunity. Elections and inducements have also failed to produce a decisive outcome, as have three Pakistan-India wars.

Depending upon one’s personal outlook, the blame for today’s situation – around a hundred thousand lives lost over three decades with no sign of a better morrow – is easily put upon the other side. Guilt can be apportioned all around, even if precise amounts are undeterminable.

India is the status quo power. The roots of the 1989 popular uprising against it lie in Delhi’s unconscionable manipulation of Kashmiri politics. A political issue was treated as a mere law-and-order problem, to be dealt with by an iron fist. India’s massive over-reaction sparked off an insurgency that lasted into the early 2000’s and resulted in the deaths of nearly 90,000 civilians, militants, police, and soldiers. Delhi’s favourite despot, Governor Jagmohan, sought to crush the secular JKLF and ordered the imprisonment and torture of its leader, Maqbool Bhat. Islamic groups eventually filled the resulting vacuum.

Under various Congress governments India projected itself as a secularist democracy, distinct from an Islamic, military-dominated Pakistan. It appeared for that reason to be a better choice. But now secularism is losing out to Hindutva, and democracy to majoritarian rule. Modi’s India offers nothing but the iron fist to Kashmiris. The BJP and PDP alliance – shaky to start with – is almost over as each furiously blames the other for a miserable 2% voter turnout, massive mob violence, and rising militancy. Much of India doesn’t care.

As Sushil Aaron notes in the Hindustan Times, the up and down cycles of civilian uprisings in Kashmir now merely infuse nationalist sentiment into India’s body politic. As a major economic player and buyer of weapon systems, India is unconcerned by international reactions at the killing of unarmed demonstrators. Significantly, King Salman bin Abdul Aziz bestowed Saudi Arabia’s highest civilian award upon PM Modi.

Pakistan: for decades it tried to translate India’s losses into its gains but failed. It hijacked the indigenous uprising of 1987 but the excesses committed by Indian security forces were soon eclipsed by those committed by Pakistan based mujahideen severely undermined the legitimacy of the Kashmiri freedom movement and deprived it of its most potent weapon – the moral high ground.

Today Pakistan’s “bleed India with a thousand cuts” policy – the existence of which it formally denies – is in shambles. India sustained losses but showed no perceptible weakening of resolve or strength. Instead jihad has become an ugly word in the world’s political lexicon. Waging covert war has led to the disappearance of international support for Pakistan on Kashmir. This fact is well known to Pakistani diplomats who represent Pakistan’s position in the world’s capitals, including those of Muslim countries.

Kashmiris: whatever losses India and Pakistan may have sustained, Kashmiris have suffered immensely more. This is certainly true in terms of lives lost and people maimed, but also in other essential ways. Video clips show Kashmir’s youth waving ISIS and Pakistani flags as they emerge from Friday prayers in Srinagar. “Azadi” demonstrations resound with Islamic slogans and with calls for an Islamic state in Kashmir. Significantly, Burhan Wani was laid to the grave by a crowd of thousands, wrapped in a Pakistani flag, and celebrated as a martyr rather than a nationalist.

That religious fervor is supplanting nationalist fervor is a sign of terrible times to come. As Pakistan is discovering to its dismay, religiously charged crowds are lethal to civilized behavior. Last week’s pre-planned and video-recorded lynching of Mardan University student Mashaal Khan by his colleagues on blasphemy charges was but the latest of countless such episodes. A religious state makes mockery of the very idea of freedom, but those who chant azadi in the streets of Srinagar seem unworried.

If Kashmir is to have a solution – i.e. belong to the third type of math problem – then what conditions are necessary? This requires convincing the three contenders to act in a way that, in the long run, is in their best interest.

India must understand that the key to cooling Kashmir lies in its own possession, not Pakistan’s. By formally acknowledging Kashmir as a problem that needs a solution, using humane methods of crowd control, and releasing political prisoners from Kashmiri jails, India could move sensibly towards a lessening of internal tensions.

Thoughtful Indians must ask why their country should care about peace in Kashmir. Surely, if India considers Kashmiris to be its citizens then it must treat them as such, not as traitors deserving bullets or to be punched down. Else it should hand Kashmir over to Kashmiris – or Pakistan. Indeed, its efforts to create a secular state and have religious harmony – and to become the third biggest economy in the world by 2050 – could all come to naught if Pakistan and India relations boil over.

Pakistan must realize that its Kashmir policy has brought nothing but misery all around. As the late Eqbal Ahmad passionately argued, although India’s leaders bear much responsibility for Kashmir’s tragedy, Pakistan’s defective Kashmir policy had repeatedly “managed to rescue defeat from the jaws of victory”. Its obsessive insistence on Kashmir-first must change into Pakistan-first.

A new path for Pakistan must factor in the increased difficulty of penetrating border fencing, and the grave domestic and international political costs of using proxies. Pakistan’s army needs to be persuaded that staying the course is a prescription for disaster. Its institutional interest must give way to Pakistan’s national interest. It can make a virtue out of necessity by cracking down upon Kashmir oriented militant groups still operating from its soil. Such groups have turned out to be a menace to Pakistan’s society and armed forces, apart from taking legitimacy away from those fighting Indian rule.

Kashmiri nationalists are, of course, key to determining whether the level of violence goes down or spirals up once again. All will be lost if its youthful majority succumbs to some ISIS-like ideology, the cancer destroying Pakistan and other Muslim countries. Far from creating a utopia in Kashmir, the ascendancy of radical Islam will pave the way for Kashmir’s descent into hell.

The road to peace has narrowed but remains open. Every conflict in history, no matter how bitter, has ultimately been resolved. In Kashmir’s case whether this happens peacefully, or after some apocalypse, cannot be predicted.

Pervez Hoodbhoy is a Pakistani nuclear physicist, mathematician, author and activist who teaches in Lahore and Islamabad