Home > English > Alternatives International Journal > 2017 > May 2017 > Resistance Highways; Finding a Place for Protest in the U.S.A. 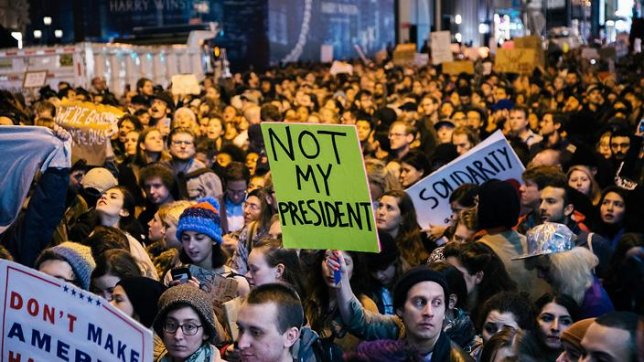 Resistance Highways; Finding a Place for Protest in the U.S.A.

“There is nothing more powerful than the sound of marching feet”
– Dr. Martin Luther King Jr.

Public protests arise out of the unique form of each city: the systems of governance, the character of the urban landscape, and the residents that shape society. Public resistance to injustice and political corruption most often takes place in large plazas in the center of each nation’s biggest city. Contemporary examples include the famous Gezi park protests in Istanbul, Turkey; Arab Spring uprisings in Tahrir Square in Cairo, Egypt; protests for freedom of speech in Place a la Republique in Paris, France; and the authoritarian take down of resistance in Tiananmen Square, Beijing, China. These locations were designed for large public gatherings and, therein, the people’s right to the city takes form.

The urban development of the U.S.A., however, lacks such a people-oriented definition of public space, due to the economic power of big corporations and their role in shaping the urban environment. Twentieth century urban renewal projects, nationwide, manifested how planners were commissioned by companies like General Motors to cut through centralized urban areas to build large-scale highway transportation systems for cars and commerce, rather than for people and community. The most famous example of a top-down corporatist planner whose urban renewal agenda prioritized the economy over the rights of residents is Robert Moses, who used highways to clear the poor Black neighborhoods of New York City in the 1950s; he was met with fierce grassroots resistance led by legendary urban activist Jane Jacobs. Jacobs’ literary works and activism laments the authoritarian design of urban cities and society: “for Jacobs, cities and neighborhoods are much more than walkable, mixed-use places, and much more than engines of innovation and economic growth. They are also bulwarks against the forces of darkness—the fonts of social progress, of human civilization, and of democracy itself.” One could argue that the contemporary political administration in the United States (the Trump era) is a culmination of the prioritization of corporate elites and white power in America, a dark age which Jacobs predicted.

Highway development across the United States not only exhibits the prioritization of corporate power, but also the continued segregation and racial divide between Black and white America. Highway construction in the 1950s specifically cut through Black inner-city neighborhoods, as planners deemed those areas and communities less valuable while bettering the cities for the white population. In Minneapolis, for example, the Black Rondo neighborhood was demolished to build Interstate 94, which runs directly through Minneapolis and St. Paul, without on and off ramps for the inner-city communities of color.

Not incidentally, the American civil rights movement was born out of that same era of racialized urban renewal, and some of their most impactful protests took place on highways. The first highway protest was led by John Lewis and Martin Luther King from Selma to Montgomery, along U.S. Route 80, which culminated at Bloody Sunday on March 7, 1965; the police attacked the marchers for expressing their constitutional right to protest, and over 50 were sent to the hospital.

In congruity with the Civil Rights movement of the 1960s, the Black Lives Matter (BLM) movement was born in 2013 after young Black teenager named Trayvon Martin was murdered by a white police officer, who was then acquitted for his crime. BLM represents the continuation of white supremacy and racial inequalities in the U.S., especially in the criminal justice system.

The murder of African-American school cafeteria supervisor Philando Castile by white police officers in St. Paul, Minnesota in 2016 led to powerful highway protests on Interstate Highway 94. BLM protesters and teachers unions united to cry out for justice, but police arrested 30 of the highway protesters for their disruption of the economic life of the city.

Protesting the U.S. government, military, capitalism, development, and law enforcement is not uncommon. However, the fight against racial segregation has been the only movement to block highways specifically, which are the most dangerous and radical landscape for protest; protesters literally put their body on the line for the cause. Their bravery demonstrates the insurgency of efforts to remedy the spatial manifestation of unjust power dynamics between the white people governing and developing urban areas at the expense of communities of color.

Highway development in the U.S. is a clear case of ethics in urban planning; their construction does not unite the city or offer the “right to the city” for the communities who lose access to those landscapes. Highways are a “no man’s land”, which are built only for fast vehicles and certainly not for people on foot. They are environmentally and socially destructive pathways used to spatially divide Americans of different races and income groups and uphold the equally divisive and destructive economy.

Countries like the U.S.A., which purport to uplift democracy and personal freedom, must reflect and demonstrate those values through urban planning, as urban areas create environments to catalyze social progress. The power of political resistance cannot and will not be stopped by space, whether city officials plan for it or not. So the question is: will planners design public spaces for people, freedom, and progress, or will they plan for faith in capitalism, which so few have? It is the planner’s role in the fight for freedom and justice to design powerful spaces for people to come together, resist corrupted authorities, and progress.

Connely, Nathan. (2005). “The Most Segregated City in America: City Planning and Civil Rights in Birmingham, 1920-1980”. University of Virginia Press.

Lewis, John. (1998). “Walking With the Wind: A Memoir of the Movement” Simon and Schuster Paperbacks. New York, New York.