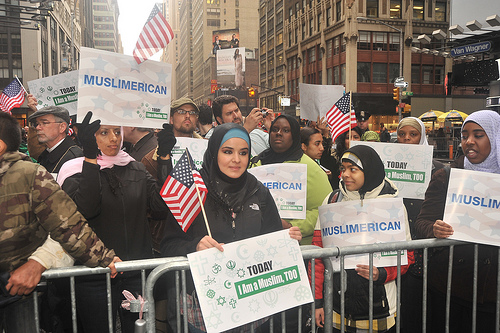 Rep. Peter T. King (R-NY)’s hearings on the alleged ‘radicalization’ of American Muslims are an affront to the brave Middle Eastern Muslims who have, during the past two months, thrown off American-backed tyrannies and are even now battling the minions of murderous dictator Muammar Qaddafi.

King is no civil libertarian or even champion of the rule of law. He jumped up and down in support of invading and occupying Iraq, and has argued that Wikileaks should be designated a “terrorist” organization. He has no respect whatsoever for American civil liberties, and is assiduously undermining our Bill of Rights with measures such as the so-called PATRIOT act, and now these unfair hearings. American Muslims need no defense. They haven’t done anything wrong. And contrary to King’s asinine falsehoods, they’ve been remarkably good citizens. King is part of a whole industry of maligning Muslims for profit, as the Washington Monthly has shown. The bottom line: stereotyping any large group of people is always wrong.

It is well known that King is a notorious supporter of terrorism himself, having championed the bombing campaigns in London and elsewhere of the Irish Republican Army in the 1980s and early 1990s. He praised them for fighting “British imperialism.” He said, “If civilians are killed in an attack on a military installation, it is certainly regrettable, but I will not morally blame the IRA for it.” The IRA is estimated to have killed 600 innocent civilians among the 1700 people it struck down. (I should clarify that I am not unsympathetic to Irish concerns on Northern Ireland, but I do object to people blowing up innocents; what Tunisians and Egyptians have demonstrated is that peaceful people power can bring about change much more effectively than sadistic tactics like public bombings.)

King’s lame excuse for his support of terrorism now is that the IRA didn’t happen to have blown up anything in the United States itself. But if the British MI6 intelligence organization had a policy of “rendition” (i.e. kidnapping suspected terrorists and bringing them back for trial), King would be an entirely plausible target and could certainly be convicted in British courts.

Some are comparing King’s witch hunt against American Muslims to McCarthyism. But I would argue that it is to Richard Milhaus Nixon that we should look for the precedent here. King is appealing to ethnic bigotry (and yes, because of intermarriage and lifeways, American Muslims are best seen as an ethnic group). And arranging the world in the terms of ethnic bigotry was the hallmark of Nixon’s career. He was also perfectly capable off McCarthyism, i.e. of falsely accusing his political opponents of being Communists. But his bigotry, like King’s, was more capacious than that.

The White House tapes that Tricky Dick Nixon made to ensure his place in posterity backfired on him by giving us a window into his sick soul. One of his techniques was to single out an American ethnic group and demonize them, putting most of them on his ‘enemies list.’

Richard Nixon fumed to his chief of staff, H.R. “Bob” Haldemann, “Most Jews are disloyal.” He noted a few exceptions. “But, Bob, generally speaking, you can’t trust the bastards. They turn on you. Am I wrong or right?

Haldemann was never one to disagree with his boss. He said of American Jews, “Their whole orientation is against you. In this administration, anyway. And they are smart. They have the ability to do what they want to do–which is to hurt us.”

Nixon was convinced that the Bureau of Labor Statistics was a Yiddish cell out to sink him by phonying up unemployment numbers. He raged, “The Jews are all over the government.” He argued that someone had to be put in charge of government agencies “who is not Jewish” so as to stop the infiltration. Washington, he exclaimed, “is full of Jews.”

Nixon navigated his social world with dreary ethnic stereotypes. African-Americans would be able to make no significant contribution to the United States, he sneered, for at least 500 years. Irish are mean drunks, to a man. Italians “just don’t have their heads screwed on tight.”

We don’t need secret tapes to know that King is a bigot toward Muslims. His public pronouncements make that abundantly clear. And, my guess is that he is pulling this stunt because he has the prospect of some big financial backing for a senate run, and those wealthy patrons want him to demonize Muslims.

King is pond scum, an exemplar of everything that is going wrong with the American Republic, the Founders of which insisted that Congress keep its grubby mitts off people’s religion.

The response of the American Muslim community should be clear. They should form PACs and give as much money as they can to King’s opponent in the next election (NB: you don’t have to be in New York– the money to the opposing candidate can be donated from anywhere in the country). And, if he libels any of them, they should sue him. That’s how it works in American politics. I don’t like encouraging more single-issue PACs, but they are the only thing that might stand between American Muslims and pogroms whipped up by demagogues like King.

Juan R. I. Cole is Richard P. Mitchell Collegiate Professor of History at the University of Michigan. For three decades, he has sought to put the relationship of the West and the Muslim world in historical context. His most recent book is Engaging the Muslim World (Palgrave Macmillan, March, 2009) and he also recently authored Napoleon’s Egypt: Invading the Middle East (Palgrave Macmillan, 2007).