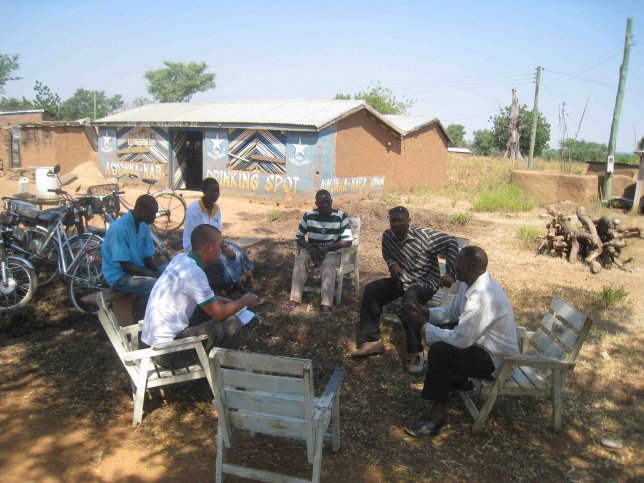 Collaborating In Pursuit of Participatory Development in Rural Ghana

Manoeuvring through the colourful and busy neighbourhood blocks of Tamale is like stumbling through a marketplace without knowing what exactly you came for; there is something electrifying about situating oneself within such a frenzied environment while venturing into the unknown.

After a long day and night journeying to the capital of the Northern region I can safely say I am coming to terms with my arrival in Ghana. It was hard sleeping straight through undisturbed to my first sunrise in the city of Tamale; the call to prayer at the crack of dawn blasts through the loudspeaker of the neighbourhood mosque and later on, the piercing sounds of goats bleating loudly and roosters crowing signal the official start of the morning. Yet with all the commotion and lack of sleep I don’t feel tired, rather, I am refreshed, renewed and ready to “wake up” from a long slumber.

Thus far, I’ve been in Ghana for just over a month, splitting my time here, starting in the South, moving to the Western, and finally the Northern region, which for the most part I will be calling home. As the livelihoods project field assistant, I am supporting the Sustainable Rural Livelihoods Project (SRLP) of Africa 2000 Network (A2N), a Ghanaian non-profit, non- governmental organization with the goal of tackling poverty, working with regions, districts and particularly communities. The organization’s integrated approach to rural development at different angles has presented me with many opportunities, as well as challenges to take on – something which I’m truly thankful for.

Over the past few years, Ghana has made significant progress in poverty reduction. According to reports from the African Development Fund and National Development Planning Commission, extreme poverty has declined from 36.5% in 1991/2, to 26.8% in 1998/9, and further to 18.2% in 2005/6. Of the total population living in extreme poverty, 53.7% live in Northern Ghana, home to approximately 17% of the population. From a humanitarian perspective, it is remarkable the amount of buzz attributed to the topic of sustainable development in Ghana; newspapers, television and talk radio relay the passion of Ghanaians in their goals to improve the human condition. In particular, the excitement and emotion that Ghanaians hold in their hearts driving development is captured through talk radio content in discussions of various development sectors such as water, food security or education. The shouting of policy makers, NGO officials and the general public, all highly driven radio contributors, can be almost as ubiquitous as the loud array of sounds from all directions one hears when walking down a main road. In Ghana, this type of dialogue on sustainable development is very common, and is an important step for those wishing to contribute in the betterment of their communities. According to Spiegel, “Citizen Participation is the process that can meaningfully tie programs to people” (1968). Organizing an environment for citizens to express their interests is a key component of meaningful rural development activities such as the project I’ve been assigned to. Despite the current momentum for the future of Ghanaian development there is a mutual feeling from myself and local people I have spoken to that there is much more to be accomplished in the next few years.

Shortly after arriving in Ghana, I joined community field monitoring visits with the goal of querying, observing and assessing progress of project districts. My anticipation started to build as we approached the first community of my first field trip. Not long before, I had been working from Canada, sitting in a leather office chair working on international projects as well with a few local programs, yet couldn’t address my feelings of urgency to be in the field abroad. It was frustrating being disconnected from the activities, successes and challenges that I could now see on the ground through my own eyes. Turning my thoughts to the people I was about to meet as we reach the community, the feeling was surreal and one of being there in the moment. Only a year ago I had been living and working in a small tropical rural community. It had been too long, I thought as I jumped out the van with my notebook, ready to learn, and collaborate. I was promptly greeted by three members of the village committee. As we walked through the community, I could see clusters of small children chase each other, while others watch shyly, with curious eyes directed at their new visitors. Around me were cosy, mostly rounded and some square mud huts, tinted light red, naturally coloured from the soil and cement mixture, covered with straw roofs. A fire burned as a woman cooked while squatting in front a large pan, with crackling oil, the scent of spices rising into the air.

We head to the first site, a palm oil machinery enclosure, and I see the care with which it was constructed. The machinery within the enclosure such as the grinding mill and processing machines not only represent a source of food and means of generating income, but also a symbol of development and progress. The storage room just adjacent to it needs some finishing touches on the roof to be complete. We observe that the machines have not been in use as of yet. One of the village committee members explains the reason for this, with a look of disappointment on his face that I feel deep within my stomach. He explained to me the reasoning for the incomplete work - they had attempted to contact the current technician to finish the job, however were unable to reach him. Looking at the site it’s hard to decide what could more more frustrating, having no signs of progress at all, or being so close to something extremely productive but still without the desired results.

Onwards to a fish pond, which we see is fully constructed, but awaiting a technical assessment from the district authority and an approval to fish. The village committee members explain their plight – lost food and income which could have been earned from the fish pond. Upon seeing dissatisfied expressions in their faces as they discuss this with a sense of urgency, the feeling becomes mutual as we are bound through a connection; I understand to some extent the aggravation, but more so their desire to complete and see the results of their project. In response to this, together we concluded that a much needed follow-up to the district authority will be carried out through our organization on behalf of the community to seek a better technician to connect the palm oil machinery as well as an officer to make an assessment of the fish pond. After concluding discussions and just before we leave the site, I can see the relief in their faces that we have worked well together in searching for a way forward.

We wave goodbye and take off in the car. Almost instantly, the wheels are in motion, literally and figuratively. In recapping, we talk almost simultaneously, fleshing out what just came up from quite an informative visit – observations, key issues, conclusions and recommendations. There are definitely challenges laid out for us alongside the community. None of us have a straight face while we converse, our looks somewhat of a mix of frustration, and deep thought, but as we engage further, we see opportunities for growth. As a result of this visit, the work accomplished for the time being feels not so much like the output of a job, but rather attempting to fulfill our obligation to achieve community improvement. Although it doesn’t show, inside I am satisfied with the moment, as we have taken some small strides, pushing towards shared aims well within sight. As for myself alone, I’m glad to be closer to where I’ve always wanted to be.

Photo: A monitoring and evaluation site visit in Bulungu Community of the Bongo District. With village committee members we discussed the direction of the project, as well as received updates on how the training received by the project has impacted the ability of the community to initiate construction of a daycare, craft centre and church using self-generated funds and support from the local government.