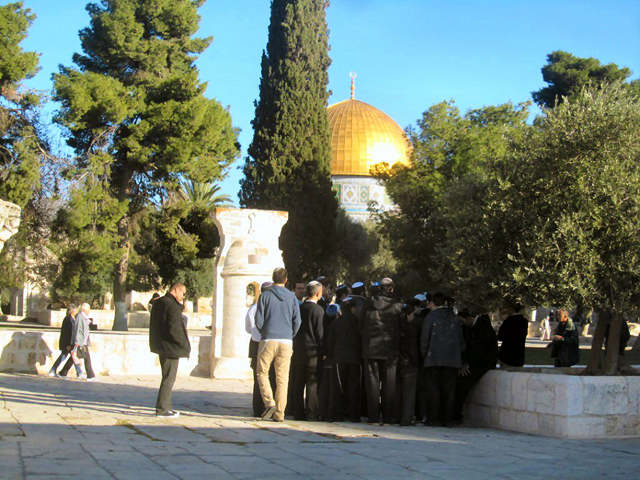 MK Miri Regev (Likud), chairwoman of the Knesset Interior Committee, instructed police on Monday to ensure that Jewish visitors to the Al Aqsa compound (Temple Mount) are able to visit the site unimpeded by police or Arab demonstrators.

“Just because some Muslims throw stones when Jews go up to the Temple Mount is not a reason to prevent them from going, as happened over Succot,” Regev told police Ch.-Supt. Avi Biton during the committee hearing.

Rabbi Yehuda Glick of the Temple Institute was also present at the committee meeting, stating that “the festival of Hanukka represents the time that Jews stood up for their freedom and equality.”

The Temple Institute is a messianic organization established in 1987 and based in the Old City of Jerusalem. The Institute is dedicated to rebuilding the Temple on Mount Moriah in Jerusalem, the ancient location of Solomon’s temple, and the current site of the Al Aqsa and Omar mosques – the third holiest place in Islam.

According to the Temple Institute, its short-term goal is to rekindle the flame of the temple in the hearts of mankind in order “to bring about the building of the Holy Temple in our time.”

Currently the Temple Institute focuses on restoring and constructing sacred vessels for future religious services. The institute has also recreated biblical musical instruments for the Temple and completed the uniform of the High Priest.

Nevertheless, mainstream Judaism perceives the reconstruction of the temple not as an immediate, task, but one left to eschatological times, after the coming of the messiah. Maimonides, a key rabbinical scholar and respected authority in Jewish law, wrote that “God deliberately moved Jews away from sacrifices and towards prayer, as prayer is a higher form of worship.”

Moreover, Maimonides believed that access to the Temple Mount should only be permitted to fulfill specific religious obligations, and, even then, only under the very strict and complex rules of purification enforced at the time the temple existed. He also believed that the temple maintains its holiness and is therefor still off-limits to Jewish worshippers. Nearly all Haredi rabbis view access to the site as prohibited to Jews.

Recently, the Chief Rabbinate of Israel issued a notice reiterating the stance of chief rabbis Shlomo Amar and Yona Metzger that, according to Jewish law, it is unequivocally forbidden to visit the Temple Mount.

Nonetheless, a growing number of national religious rabbis are encouraging visits to certain parts of the mount, believing Jews are permitted access according to certain medieval rabbinical authorities. Indeed, some rabbis are of the opinion that it is imperative for Jews to ascend in order to halt the ongoing process of Islamization of the Temple Mount.

Among the Israeli parliament there is also growing support for strengthening the Jewish presence in Al Aqsa compound. In July, the Housing and Construction Minister Uri Ariel (Bayit Yehudi) stated that perhaps the time has come to rebuild the biblical temple.

During a meeting of the Knesset Interior Committee, Bayit Yehudi MK Zvulun Kalfa also described the situation on the compound as one of “national importance,” claiming it is “unbelievable that Jewish people cannot get access to their holiest place.”

At the beginning of November, Bayit Yehudi (Jewish Home) Party announced it has advanced new laws that would enact the establishment of regular prayer hours for Jews at the compound. According to the new laws, which are already undergoing legal processing through the Ministry of Religious Services, daily prayer hours would be set for visiting Jewish groups

Moreover, in May this year, the director-general of the Religious Affairs Ministry announced that regulations governing the right of Jews to pray on the compound would be reviewed and updated. He added that his office was looking into changes to the current laws in order to relax the informal ban on worship at the site.

Such statements by Israeli politicians ricocheted among Muslims in the Middle East, who accused Israel of attempting to divide the compound in a manner similar to the division at the Ibrahimi Mosque in Hebron.

Consequently, the International Union for Muslim Scholars has urged Muslims around the world to consider Friday November 22, an international day in support of Jerusalem. During this day, Muslims are encouraged to participate in solidarity activities with the Al-Aqsa mosque and the Palestinians of Jerusalem, talk about them in the Friday sermons, lectures and seminars, and pray for them.

In a statement published on November 21, the union warned of the serious consequences of Israel’s ongoing violations of the sanctity of Al-Aqsa Mosque and its attempts to divide it.

The Al Aqsa compound is the most volatile religious site in Palestine. The Second Intifada began after Ariel Sharon visited the compound with an escort of thousands of policemen in September 2000. Clashes in Jerusalem and across the whole country have sporadically erupted since the British occupation of Palestine following any attempts to change the status quo of the holy site.