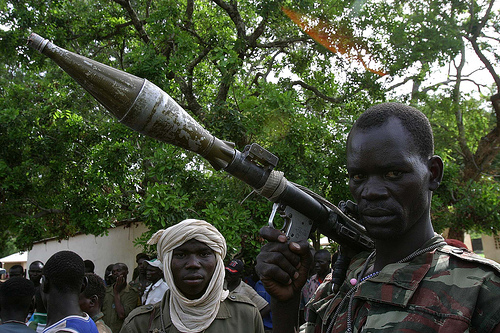 French foreign minister Laurent Fabius’ recent declaration that the Central African Republic (CAR) was “on the verge of genocide” brought some much needed attention to the ongoing conflict in the country. Following a coup d’état this past March in which former president François Bozizé was overthrown, the country has been experiencing an upsurge in violence. The coup was carried out by a group known as Seleka, a coalition of mainly Muslim rebels from the northern region of the country, and brought its leader Michel Djotodia to power. Although Djotodia dissolved the group in September, he has been unable to control the rebels as they continue to carry out acts of extreme violence on the population. A Christian self-defence militia known as the anti-balaka, formed in response to the Seleka coalition, are also responsible for the increase in violence. Since the coup d’état in March, the two groups have been involved in a “wave of tit for tat violence”. With the situation spiralling out of control, it has left the international community questioning what the appropriate course of action is to stabilize the situation.

Much like recent events in the country, not many people are familiar with the Central African Republic itself. Despite its rich and tumultuous history, the landlocked nation of 4 million remains relatively unknown. Similar to other African countries, the potential of the post-independence era of the CAR was impeded due to the early death of its charismatic leader Barthélémy Boganda. Boganda was a fierce nationalist and the individual responsible for negotiating the CAR’s independence and although it has never been confirmed, it has been highly suspected that his mysterious death in a plane crash one year before the countrys expected independence was the work of the French secret service. In the decades following Boganda’s death, a series of individuals who enjoyed French support came to power via coup d’états, the most infamous of them being Jean-Bédel Bokassa. As one of the most corrupt and violent leaders the CAR has had, the eccentric Bokassa led his country to economic ruin; his coronation as the self-proclaimed emperor of the Central African Republic cost the poverty-stricken country $22 million which at the time was one-third of the countrys annual budget. Bokassa’s regime was heavily supported by the French, both militarily as well as financially. As a resource rich nation, France kept a vested interest in the CAR throughout the decades.

Although the themes of political turmoil, imperialism and poverty are ones that the Central African Republic shares with many of its fellow African countries, the deep ethnic and religious divides that are present in various African countries is not a characteristic that is common to the CAR. Despite its politically tumultuous past, the diverse groups living in the Central African Republic have historically peacefully co-existed. Unlike certain countries, there is no history of sectarian tension in the CAR. This is what makes the recent violence quite startling; in a short amount of time, the country has become deeply divided across religious lines. Each attack carried out by one group on the other community has resulted in retributive attacks. This vengeful brand of violence has intensified over the months, taking a turn for the worse this past September. There has been looting (with many villages being burnt to the ground), indiscriminate killings, as well as many other human rights violations. The increase in violence has created an atmosphere of fear and insecurity and has forced many to flee; there is an estimated 400,000 people who are internally displaced and 64,000 refugees.

As the situation quickly deteriorates and awareness of the conflict grows, the question as to how the international community should respond is becoming more pressing. Presently there is already an African Union peacekeeping operation comprised of 2, 400 troops in the country. Initially the African Union had promised 3, 600 troops however they have not been able to find the resources. Former colonial power France announced plans to send 1000 troops in addition to the 400 French troops already present in the country. Many including the UN deputy secretary-general, Jan Eliasson, do not believe that this is enough and that instead, a larger UN peacekeeping force to ensure the safety of civilians may be necessary. Right now the United Nations is only exploring options of financially supporting the African Union led operation but UN secretary general Ban Ki-moon said “he would back a UN force with nearly 11,000 soldiers and police if the crisis degenerates.” Stabilizing the situation in the CAR and ensuring that it doesn’t descend further into chaos is critical for a region that is already extremely unstable. The Central African Republic is bordered by countries such as Sudan, South Sudan and the Democratic Republic of Congo, all of which are experiencing turbulence. If the situation in the CAR were to degenerate, it would also have serious implications for the region.