Home > English > Alternatives International Journal > 2013 > December > In Front of Pipelines, I Will Support the Mohawks 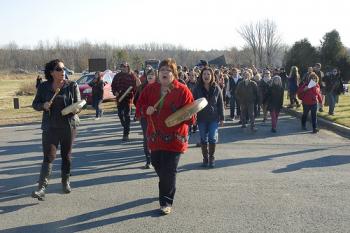 In Front of Pipelines, I Will Support the Mohawks

With hundreds of others, I participated on November 16 in an unprecedented mobilization in Kanehsatà:ke (Oka), Mohawk Territory. Twenty-three years after the terrible Oka crisis, Mohawks this time invited non-indigenous people to join the fight against the expansion of tar sands pipelines.

This unique invitation also came from several indigenous communities across Canada resulting in more than 130 demonstrations against the expansion of the tar sands. In all, thousands, maybe tens of thousands of people were mobilized to mark their presence and affirm their intention to fight this battle till the end. While we symbolically blocked Highway 344 with a "Round Dance," I realized that thousands of people in Canada were then simultaneously taking a deep breath of hope before getting back into a struggle till finish.

The comparison between the nauseous and hellish land of Sauron and the oil sands development sites is nothing new. It has already been shown that the current methods of production creates a toxic local environment, with increased rates of cancer and other health risks affecting first and foremost the First Nations communities living in the region.

The industry, of which 71 per cent is controlled by oil giants owned by foreign companies, led the Alberta government to approve more than 100 oil sands projects covering 92,000 square kilometres of northern boreal forest, and 100 other projects covering 50,000 additional square kilometres are available, representing a total area the size of Florida.

If the Canadian government gets the means to export its production through new pipelines, the oil sands industry plans to triple production to more than one million barrels per day over the next few years.

Joining the struggles of Indigenous Peoples

As all Quebecers who lived in 1990, I know that the Mohawks will not abandon the fight, whatever it costs. The bond that unites the Indigenous Peoples to their lands is such that they just cannot give up their struggle to protect it. But unlike then, the "whites" will this time have to make the choice to fight alongside and accept to receive blows. At Elsipogtog, New Brunswick, we have witnessed in the last weeks a sad spectacle of colonialism "à la Tsahal" where extractive corporations are supported by a most repressive State. These images of SWN trucks protected by the RCMP will one day be in history text books! And despite the injunctions, despite imprisonment, despite the tear gas and injuries to men, women and children, the entire Mi’kmaq community still resists the extractive machine.

Yet this battle against climate change and for the protection of environment is not only theirs because we all belong to the same land. While the Canadian Government supports the expansion of extreme oil from Alberta, we are increasing the collective responsibility of all citizens from here to cope with climate changes everywhere. In the aftermath of extreme catastrophe, as the one witnessed in the Philippines recently, we have a moral obligation to question ourselves, as a society, in the creation of global climate changes. We must question ourselves even more when the most marginalized communities decide to oppose the irresponsible development of the largest industrial project on the planet ( the tar sands ) braving government repression.

In short, when communities choose to go to the front line to stop irreversible damage to our ecosystems, but more importantly, to prevent Canada from launching its "climate bomb" in the atmosphere, we must respond "present"!

A season of action

On November 16 , the National Day of Action to defend the climate saw the participation of many environmental and community groups, trade unions and indigenous communities.

If the day was crowned with a huge success with dozens of mobilization "from Coast to Coast to Coast", the time is now to organize even more meaningful events and actions. November 16 alone shows that the success of future actions depends totally on indigenous participation.

If the environmental and social movements want to stop the expansion of tar sands, reduce our collective footprint on the environment, stop the policies of Stephen Harper and those after him with the same political ideology, they have to make a simple choice and that is to follow the "leadership" of the First Nations in this fight.

In front of pipelines, I will support the Mohawks. If social movements also do, we cannot be defeated.