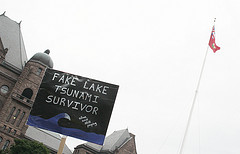 A month ago, thousands of chanting voices echoed between downtown towers in the core of Canada’s largest city, with people reclaiming the streets, facing down thousands of armed police — a dignified challenge to the closed-door G20 summit.

Although far from headlines, it is precisely the Toronto G20 agenda that sparked dramatic street protests, echoing significant grassroots mobilizations against the G20 summits in Pittsburgh and London.

Economic growth is a buzz term in many policy documents along with platitudes pronounced by politicians at the G20. "Sustainable economic growth" is the refrain but "growth for whom" is the question.

As billions in public bailout financing flows into major banks, calming the crisis in the halls of financial power, key banks are again securing massive profits while the economic crisis continues to deepen for a global majority.

As a consequence, the vibrant protests against the G20 are fundamentally inspired by growing social and economic injustice. In Toronto, the Ontario Coalition Against Poverty (OCAP) said in a statement: "We protested because we know that the policies of the G20 affect poor people every day: decisions to fund security and prisons instead of schools and community centres, decisions to cut public services, childcare and welfare at the same time as giving huge tax breaks to corporations and banks."

It is the social violence of poverty embodied in an economic vision of endless "growth" by any means, foundational to the G20, that creates context for street protests, as financial markets, often focused on speculative financing, are prioritized while public institutions and people suffer. In the official G20 Toronto Summit Declaration the term "social justice" is not mentioned once.

No clear process to undercut growing global economic inequalities was pronounced at the G20 summit. This is at a time when the richest two per cent own more than half the world’s household wealth, with the global divide between rich and poor wider than at any other time in recorded history.

In the U.S. alone, almost 40 million live below the poverty line. Despite populist rhetoric from Barack Obama, there is greater wealth concentration at the top income bracket today than at any time since the 1920s, and a wealth gap that is growing for marginalized communities and women, as outlined in an alarming report by the Women of Color Policy Network in 2010.

In Canada, economic injustice is also mounting, specifically in Québec where the earning gap between the wealthy and the rest is at a 30-year high according to a recent study by Institut de recherche et d’informations socio-economiques. Major street protests in Montreal challenged a highly unpopular healthcare tax introduced in the past budget, a tax which undermines the principles of public healthcare while amounting to a $200-per-year flat tax by 2012 for all citizens. Essentially, someone earning $15,000 a year will pay the same in health tax as someone making $300,000 per year, "a fundamentally unequal and unjust social equation," according to Québec Solidaire.

In Canada, cutbacks aimed at key public institutions in a time of economic crisis are widespread, while in Ottawa the Conservative government aims to cut corporate tax rates to 15 per cent by 2012. Canada will then have the lowest tax rate for corporations in G7 major economies - reducing annual government revenues by $14 billion as our society is forced to walk a financial tightrope.

Canada has given major corporations an unconditional gift by providing corporate tax cuts in favour of balancing the budget. Combined with deep cuts in public spending on healthcare, social assistance programs for the poor and financing for post-secondary education, these cuts will fuel institutional crises in our public universities, as currently seen at the University of Toronto, where the arts and science budget was slashed in favour of fiscal balance amidst growing public outcry.

Conservative funding assaults on key community organizations in Canada, including women’s groups like Status of Women Canada, amounting to tens of millions of dollars in recent years, are occurring in tandem with billions in tax cuts being doled out to corporations. This is at a time in Canada when men on average get paid over 20 per cent more than their female colleagues, according to a 2010 study by the Organization of Economic Co-operation and Development (OECD), giving Canada one of the highest gender earning gaps among OECD nations.

These slash-and-burn economics were propelled to a global stage by Conservative politicians at the G20 summit in Toronto, dangerous policies undercutting social justice for the global majority. It is no wonder they were duly confronted by thousands on the streets in Toronto.

Canada’s Conservative finance minister and delegate to the G20, Jim Flaherty, oversaw Ontario’s devastating experiment with "savage capitalism" in the 1990s, resulting in massive cuts to social programs extending from education, to food banks and shelter programs for the homeless, slashes to public spending and billions in corporate tax cuts resulting in stormy provincial finances and thousands of homeless on the streets in Toronto.

"Ontario paved the way for tax cuts in this country," said Flaherty in a recent interview on public sector cuts.

"I’ve done it before. I did it in Ontario," proclaims Flaherty, referencing an era in Ontario with extended house arrest for people accused of welfare "fraud" by the government. In Sudbury, 40-year-old Kimberly Rogers died in 2001 under house arrest while eight months pregnant, sparking national controversy while illustrating the profound inhumanity that is the foundation to Conservative economics.

Canada pushed similarly violent economics at the G20 summit, successfully stifling the campaign to establish a tiny global bank tax on financial transactions, or "Robin Hood tax" that could create an international financial pool to assist in poverty alleviation or to ensure that public financing will not again bailout banks for capitalist tricks gone bad on the market place.

Financial "austerity" measures celebrated at the G20 will undoubtedly further target social safety nets globally, as the politicians, holding a billion dollar-plus photo-ops in Toronto, pronounced intentions to cut annual deficits in half by 2013, under the influence of Canada. Tightening on national budgets will certainly impact the most economically marginalized by the financial crisis if Canada is any indication, as fiscal responsibility is centred on cutting social programs while sustaining billions in corporate tax cuts.

"The austerity agenda announced at the G20 is unprecedented, they all agreed to the right-wing edge of policy advocated by the Harper government," said John Clarke, organizer with OCAP, "the implications to such austerity measures are incredible in Ontario, where we are fighting against cuts to the special dietary program for people on social assistance, a small fraction of the over one billion spent on the summit could refund many times over the special diet program for the most marginalized."

"Globally speaking we are going to be dealing with cuts backs and attacks at a totally different scale," he continued. "People mobilizing against the G20 summit in Toronto see a direct connection between the reprehensible gatherings of world leaders and the kicks in the teeth they are receiving from their local government, we are looking at an incredible period of austerity but hopefully we’re also looking at an incredible period of resistance."

Recent street protests in Toronto against the G20 build on a historical arc of social activism in Ontario, where, over decades, groups like OCAP have facilitated community resistance to the type of "austerity" measures focused on in announcements at the recent international summit.

Social resistance over the past decade in Ontario, lead-by marginalized communities opposing Conservative anti-poor economics, extends beyond traditional protest into direct actions aiming to confront political leaders, institutions and symbols of political power in Ontario under a Conservative government that saw hundreds of homeless die on the streets.

In line with economic austerity, multiple millions were cut from social housing projects across Ontario starting in the late 1990s, sending thousands of people on to the streets, policies that continue under the current Liberal government but that took a pointed extremism under Mike Harris.

Confronted by policies in Ontario shaped by a profound disrespect for the dignity of marginalized people and economic disregard for publicly funded institutions that facilitates life for the majority, from universities to hospitals, groups like OCAP took on direct action as a way to be heard.

Militant protests at the Ontario legislature in June 2000, led-by OCAP, were an important moment in the recent history of social movements in Canada, a moment that expanded the possibilities for social movements to consider the power of mass direct action.

After police refused a simple request by OCAP for poor people to address politicians at the legislature, those directly responsible for slashing social programs for the most marginalized, protesters challenged police lines at Queen’s Park, insisting to speak truth to power on the cuts in public funding that took hundreds of lives on the streets. Certainly, this protest created debate on street tactics, leading some union activists to call for cuts to OCAP funding. However, as outlined by author Naomi Klein at the time, OCAP creates "a space for the poor to speak, and to act, for themselves. And this is where things get complicated: Most of us don’t really want to see and hear this, the anger in their voices, the rage in their actions."

Anger on the streets in Ontario, resulting from the social violence inflicted by a Conservative government administering cuts to social programs in parallel to billions in corporate tax breaks, illustrated the necessity to go beyond reforms or political lobbying in Ontario at a time when hundreds had died on the streets.

In Toronto 2010, street demonstrations against the G20 again challenged parametres of protest in Canada, as tens-of-thousands marched to challenge the G20 economics of global austerity measures pushed by key Canadian politicians instrumental to the deadly Ontario policies one decade earlier.

Let us view the smashed windows of Canada’s major banks on Bay Street as a warning shot by activists, a cry to immediately reverse growing economic inequalities fostered by austerity, not only in Canada but globally.

This article originally appeared at rabble.ca

Stefan Christoff is a journalist, community organizer and musician in Montreal who regularly contributes to rabble.ca. He can be contacted at http://www.twitter.com/spirodon