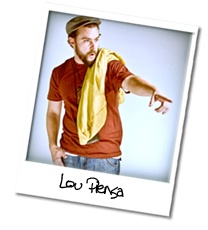 “The idea is definitely to bring people together.” Socially conscious rapper Lou Piensa chats with the AIJ.

Lou Piensa is co-founder of the multi-cultural, multi-lingual, eclectic hip-hop super-group called Nomadic Massive. Montreal’s own will be playing at this year’s Journées des Alternatives on August 28th. I spoke with Lou about hip-hop and activism.

How do you think music can influence society to make change?

The most important thing is that music kind of penetrates people’s consciousness in a comfortable way. More so than discourse, a speech or written document.

Music is based on vibration and stuff that people feel physically. Depending on where you get the emotion you can definitely reach a lot of different people that are feeling different things and through lyrics you can bring consciousness of issues to them in a way that is very natural. Doing it through music is a natural process as opposed to something where you are forcing the idea.

Can you explain the concept of Edutainment?

Who coined that phrase was Krs-One when he was part of Boogie Down Productions. It’s educating through music. Not everybody uses music for that purpose, but we come from a certain type of hip-hop that we appeal to and we support and we really like. Not to say that it’s all we listen to, but its something that stuck out for us. Hip-hop has brought concrete change to community, it has brought concrete change across the world as far as lifting people’s spirit up and making them feel like something can be done and they can make something out of their selves also. Through music as an artist or through music within themselves. I can definitely say that I am a result of edutainment as far as music goes. I’ve always listened to music that has opened me up to a lot of things that help the way I perceive things across the world.

As a multi-lingual and multi-cultural collective, is Nomadic Massive a model for Canada?

We are definitely a result of multi-cultural Canada in the sense that we all live in Montreal and we all come from different places across the world. This is especially reflected in a lot of neighbourhoods across Montreal.

A lot of us are based out of Cote-des-Neiges – it is like the most multi-cultural neighbourhood in the country. You have over 150 nationalities out here; people mixing up and people that are efficient cultures already. I work for a Canada Youth Centre here. I was just with a young rapper here who’s half-Hungarian, half-Laotian. That’s just one example, but if you look at all the kids they are almost all different nationalities so, it is representative of a lot of the realities in Canada.

As far as a model it is something that happened naturally. We try not to push too much this whole idea that we are this cultural mosaic or whatever. Its just a natural thing, we are human beings before anything, but a lot of people find it interesting that we kind of represent coexisting in a way.

The idea is definitely to bring people together. I think that’s reflected in our crowds. You see people from different communities; different backgrounds areas and music scenes all come together. We do that not because we are different origins, but also through our musical perspective that we try to see music as one and use a lot of different influences that are related to hip-hop no less, but people don’t necessarily attach to hip-hop. We try to mix it up as far as that goes and we try to mix it up with our ideas as well we are not really stuck on one particular way of thinking or one political wave or whatever.

Other than spreading the message through hip-hop what other activism do you do personally?

That’s funny I was just talking to a friend of mine who is very involved in rallies and writing letters you and getting into a lot of other social issues. I use music as social inspiration and to try to create some of the messages. Other than that you still gotta use that mentality everyday when you wake up or go to bed. I work with youth everyday as well. Everybody in Nomadic is actually involved with youth or education through social programs and stuff like that. I think the term activist sometimes corners people into a corner and creates an image of what you should be. I think that people can be activists in their own rights and their own ways I think they are just important everyday in trying to bring something to help people.

Nomadic Massive is working on a new mix-tape and a follow-up to their self-titled second albumhttp://www.nomadicmassive.com/music.htm.

Joel Balsam co-edited this month’s Alternatives International Journal and is a student journalist at Concordia Univeristy.